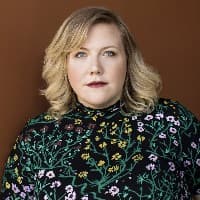 Lindy West (born March 9, 1982) is an American writer, comedian and activist. She is the author of the essay collection Shrill: Notes from a Loud Woman and a contributing opinion writer for The New York Times. The topics she writes about include feminism, popular culture, and the fat acceptance movement.

All quotes by Lindy West:

Just live! Live now! Don't wait, and don't let anyone tell you that you're a work in progress.

Indignation and determination are much more constructive emotions than shame and embarrassment. And feminism was this engine that turned one into the other.

On a practical level, I'm uncomfortable at comedy clubs because there are so many shitty dude comics who have made my life miserable. If I go to a comedy club and I look around, I don't know which of the dudes lining the wall told me that I was too fat to get raped. It makes me nauseous. But that was a couple years ago, and meanwhile, comedy has changed a lot.

We only get one life. Wasting someone's time is the subtlest form of murder.

Abortion. Feminism. Online harassment. Social justice. Women's "no"s are constantly doubted and eroded in our culture. Saying "no" and sticking to it  -  and, especially, doing that where other women can see it  -  is a political statement.

The narrative for girls is that you just hang around and wait to be "chosen" and then you belong to somebody and you live happily ever after. There isn't room for more nuanced concerns about the creepy proprietary nature of that relationship model, or the breadth of what fulfillment really means for women.

I'm fortunate to have a hilarious, fun, brilliant family that I love spending time with that keeps me in a healthy head space. The internet can be so enthralling in a bad way, in a toxic way, where you feel like your brain is submerged in this sewer and you can't climb out of it. The main thing is spending time with real physical people who remind you who you are. It can be so tempting to believe that you are who the internet says you are.

Ashley Graham on the cover certainly better than nothing. It would have felt revolutionary to me as a teenage girl, for sure. But really, all they've done is include a very conventionally attractive woman who is two to three sizes bigger than the model they would usually use.

There are women who live in U.S. with maybe one abortion clinic. The right wing is trying to make it impossible for women to get abortions, even if they are technically legal. This is done in a literal way  -  you can't get to a clinic, you can't afford it, you have to tell your parents  -   and by making it something that young people feel they can't talk about, can't ask for help with, can't do anything about but try to either induce abortions on their own, alone and unsafely, or have children they don't want and can't care for. It's just an assault on all sides.

I would want people to know that they don't have to hate their body and don't have to be afraid of it, but that it's also okay to feel uncomfortable with it at times. The body positivity conversation often gets sort of oversimplified and flattened into, "Yay! Everyone has to love everything about their body all the time!" And that's not realistic, that's not how bodies work, that's not how emotions work. It's fine to have these kinds of confusing and conflicting feelings.

It’s hard to feel hurt or frightened when you’re flooded with pity.

When I started to internalize fat positivity and believe it, my response was the same one I had when I started to understand the scope of gender inequality: deep indignation.

There's something behind the decision to choose to lash out at a woman. The answer to how to fix internet trolling is like fixing sexism. How do you do that? I'm of the opinion that discourse helps, that changing people's minds changes people's actions. On a more practical level, I do enjoy sassing back at trolls, because I always win, because my job makes me better at arguing. If I can frustrate or embarrass a troll, then that lodges in that person's brain that trolling me is not a consequence-free hobby.

One of the most irritating things about America is this bravado we have  -  like, "You guys, we're amazing! We're the most amazing country in the world!" And I'm like, "Are you sure? Because we're garbage and backward in a million areas that other developed countries left behind years ago!"

The messaging campaign that stigmatized the term feminist definitely worked on me when I was a teenager. I always believed in equality, but there's such intense pressure to be cool and not alienate boys, to not be a pain in the ass  -  to not be "that kind of woman."

When I started tentatively dipping a toe into fat-positive internet spaces, I learned that reclaiming the term was the quickest and most powerful way to make it stop hurting. If you can say, "Yes, I am fat, and it's okay to be fat," then all of a sudden it doesn't hurt when someone says it to you. And it's also just a descriptor. It's like tall.

I fervently believe that people shouldn't stay in bad relationships just because of some artificial rom-com notion of true love being "forever." In fact, I think that the pressure of conforming to that framework ruins-literally RUINS-a lot of people's lives.

I feel like women in comedy have staked out space for themselves and circled the wagons in this inspiring way to say that it's absolutely unacceptable and ludicrous to suggest that women aren't funny anymore in 2016. It just makes you look like a dinosaur.

I'm a deeply privileged person. I have a safe, comfortable life, and there's very little at risk for me. I'm not going to get disowned by my family for talking about having an abortion, and I'm not risking my job or homelessness by saying something controversial that my employer might not like. I have this gift of stability and it feels obligatory to use that to make the world better in whatever small ways I can. It's incredibly fulfilling. Even helping one person feel a little bit better is really important to me and makes me feel like my life means something.

I've always been an escapist, I guess, and I spend so much time on the internet absorbing ideas and processing the horrors of the world that when I'm actually going to read for pleasure, it's always something ridiculous about a dragon. I'm so saturated with the injustice and torment of the real world that it's really hard for me to get myself to read anything that's even set in our universe, because I'm exhausted by our universe.

I've been doing short-form writing for a decade, and six years ago I signed with an agent, and we've been working on figuring out what my book would be. I was always so embarrassed that it took me so long to figure it out, but I think, in retrospect, I just wasn't ready to write a book six years ago. I wasn't confident enough as a writer and I wasn't coherent enough in my worldview. It just took this long for me to be a mature enough writer and be ready to do it.

In my freshman year of college, when a male professor asked the class, "Who here identifies as a feminist?" Only one girl raised her hand, and the rest of us just sat there. He basically just shamed us for the rest of the class   -   in a constructive way. He went around the room and said to each girl, "Why didn't you raise your hand? Feminism means men and women deserve the same rights, and that the balance in the world is currently tilted in men's favour.

My relationship with brick-and-mortar shopping is, in general, unpleasant. I can't remember a time in my life when I could go to a physical store and find a variety of things in my size that excited me and fit my personal style. As a plus-size shopper at a typical mall, you're limited to at most five stores out of maybe 50 clothing retailers. That leaves us with very few options and, for people on a tight budget, pretty much no chance of comparison shopping. You take what you can get.

If you're making yourself vulnerable in your writing, then they know where to hurt you, which is extra fun. I had to develop coping mechanisms on the fly, and slowly it got better, to the point where now I barely notice. I'm like an old, gnarly turtle now. The interaction with the troll who impersonated my dad made me start to understand who these people are, and I figured out, in a really profound way, that happy people don't do this. It's hard to feel afraid of someone when you pity them.

I don't want any woman to think that I don't have empathy and deep care for all women's body issues. I just want to make sure that we don't only focus on the most palatable ones.

Being fat just a fact. It feels important to me to speak the truth about that, and to not use a euphemism. Euphemisms are things we use when we want to dance around something or don't want to say it. I don't want to be something that is avoided. And I am my body.

There were moments from my childhood when I remembered realizing that I was too big. I carried them around as weapons to use against myself, to remind myself there was something wrong with me.