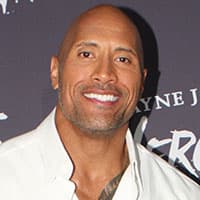 Dwayne was born in Alameda County, California on May 2, 1972. Spent his youth in New Zealand. Lived in Charlotte, North Caroline, Hamden, Connecticut. Attended High School in Honolulu and later in Nashville, Tennessee and Bethlehem, Pensylvania.

He was a football player until 1996, played for Calgary Stampeders of the Canadian Football League.

Johnson founder the Dwayne Johnson Rock Foundation. A charity working with at-risk and terminally ill children. On October 2, 2007, he and his ex-wife donated $1 million to the University of Miami to support the renovation of its football facilities. The University of Miami renamed the Hurricanes' locker room in Johnson's honor. In 2017, he donated $25,000 to Hurricane Harvey relief efforts. In 2018, Johnson donated a gym to a military base in Oahu, Hawaii. After the 2018 Hawaii floods, he worked with Malama Kauai, a nonprofit organization, to help repair damages caused by the floods.

The rock is active in social media. As of 2021, his Instagram profile @therock has over 240 million subscribers, which makes him 4th the most followed influencer worldwide.

MotivationHard pastTimeI like to use the hard times in the past to motivate me today.

MotivationGoalsPersistenceLifeMy work, my goal, my life, it’s like a treadmill. And there’s no stop-button on my treadmill. Once I get on, I just keep going.

MotivationGoalsPersistenceLifeMy work, my goal, my life, it’s like a treadmill. And there’s no stop-button on my treadmill. Once I get on, I just keep going.

BodybuildingTrainingLifeTraining for me is a metaphor for life, period. The dedication, the determination, the desire, the work ethic, the great successes and the great failures – I take that into life.

SuccessFailuresLifeWhen life puts you in tough situations, don’t say ‘Why me?’ just say ‘Try me’

BodybuildingMenThe men I idolized built their bodies and became somebody – like Sylvester Stallone and Arnold Schwarzenegger – and I thought, ‘That can be me.’ So I started working out. The funny thing is I didn’t realize back then that I was having a defining moment.

SuccessHard workGoalsWhat's the key to success? The key is, there is no key. Be humble, hungry, and the hardest worker in any room.

TrainingTraining is my anchor every day, regardless of whether I’m on a set or at home.

SportTrainingThe one thing that’s absolutely guaranteed is that I will still be training when the sun comes up.

BodybuildingLifting weights is why I don’t need therapy today.

SuccessMotivationThere are signs around us all the time, and a lot of the time we don’t see them. But sometimes we do, and those become the greatest lessons.

SuccessMotivationConfidenceSometimes you find success and sometimes you don’t, but my satisfaction is knowing I’ll always control my effort with my own two hands.

SuccessFocusSuccess will always be driven by focus & effort — and we always control both.

SuccessI have a little belief that success is never unrelenting. And if success is what we chase – then neither are we.

SuccessMotivationAmbitionsGoalsVision, guts and enthusiasm. Three qualities I feel you always gotta have to have a shot at success.

MotivationFailuresBy 23yrs old, I failed at achieving the biggest dream of my life. My ass was kicked and I was down – but not out. I refused to give up, got back up and pushed on.

Hard workMotivationIt ain’t the 99% who’s not putting in the relentless hard work that I care about. It’s the 1% who is.

BodybuildingIt’s not about the car your drive. It’s about the size of your arm hanging out of the window.

WrestlingTwo things happen when an athlete gets injured. Some guys say, ‘;F*ck it, I’m going to wait it out 3-4 months.’ But with me and lots of other athletes, you find your eighth or ninth gear – a gear you’ve never gone to before – and say, ‘I’m going to come back.’

WrestlingI’ve always loved the showmanship of professional wrestling. While I love making movies, I love that platform, too.

WrestlingWWE is a space where I thrived, and I loved, and I still do. I love connecting with an audience; that is the greatest thing about going back to WWE.

DivorceYou don’t sign up for a divorce when you get married. It’s very painful. But it’s taught me a great deal about myself.

WrestlingWhen I was a kid at four years old, that’s when I started amateur wrestling with my dad and family. And when that’s instilled in you, it never goes away.

Sense of humorMy philosophy is, it’s always very rewarding when you can make an audience laugh. I don’t mind making fun of myself. I like self-deprecating comedy. But I’d like you to laugh with me occasionally, too.

FootballFootball changed my life, it gave me a platform to get out my aggression, and it gave me a sense of value.

GoalsConfidenceHard pastI grew up where, when a door closed, a window didn't open. The only thing I had was cracks. I'd do everything to get through those cracks - scratch, claw, bite, push, bleed. Now the opportunity is here. The door is wide open, and it's as big as a garage.

Be yourselfThe single most powerful thing I can be is to be myself.

Hard workGoalsPersistenceThere's no substitute for hard work and getting out there and busting your butt at whatever it is. Nothing comes easy. You can overcome so much just through hard, focused work.

FocusMotivationThink back five years ago. Think of where you’re at today. Think ahead five years and what you want to accomplish. Be unstoppable.

SuccessFocusSuccess at anything will always come down to this: focus and effort. And we control both.

SuccessGoalsThe first step to achieving your goal, is to take a moment to respect your goal. Know what it means to you to achieve it.

SuccessConfidenceHard pastIn 1995 I had $7 bucks in my pocket and I knew two things: I’m broke as hell and one day I won’t be.

Hard workThere is no substitute for hard work. Always be humble and hungry.

SuccessSelf-DisciplinePersistenceSuccess isn’t overnight. It’s when every day you get a little better than the day before. It all adds up

ConfidenceWhen you walk up to opportunities door, don’t knock it. Kick that b!tch in, smile and introduce yourself.

GoalsYou don’t need directions, just point yourself to the top and go!

FailuresFailures not an option. It's just a step.

Being kindNot only do I think being nice and kind is easy, but being kind, in my opinion is important.

SuccessThe wall! Your success is on the other side. Can’t jump over it or go around it. You know what to do.

SuccessIf something stands between you and your success, MOVE IT! Never be denied.

Hard workAmbitionsGoalsDon’t be afraid to be ambitious about your goals. Hard work never stops. Neither should your dreams.

MotivationWith drive and a bit of talent you can move mountains.

Self-DisciplineHard workBlood, Sweat and Respect. First Two You Give, Last One You Earn