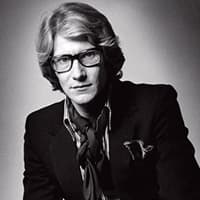 Yves Henri Donat Mathieu-Saint-Laurent (1 August 1936 – 1 June 2008), referred to as Yves Saint-Laurent or YSL, was a French fashion designer who, in 1962, founded his eponymous fashion label. He is regarded as being among the foremost fashion designers of the twentieth century. In 1985, Caroline Milbank wrote, "The most consistently celebrated and influential designer of the past twenty-five years, Yves Saint Laurent can be credited with both spurring the couture's rise from its 1960s ashes and with finally rendering ready-to-wear reputable." He developed his style to accommodate the changes in fashion during that period. He approached his aesthetic from a different perspective by helping women find confidence by looking both comfortable and elegant at the same time. He is also credited with having introduced the "Le Smoking" tuxedo suit for women and was known for his use of non-European cultural references and of diverse models.

BeautyPassionThe most beautiful makeup is passion, but cosmetics are easier to buy.

FashionWomanHappinessLoveThe most beautiful clothes that can dress a woman are the arms of the man she loves. But for those who haven’t had the fortune of finding this happiness, I am there.

FashionClothesHappinessWhen you feel good in a clothing anything can happen. A good clothing is a passport for happiness.

ClothesStyleBasic clothes are for all women, to last for decades and decades. They are the future and will never change. I am persuaded of that.

ClothesMenIf men wanted to look good in a skirt, they would need the body of an African. And the colour. A skirt with white, skinny legs. Horrible!

FashionWomanClothesTimeI tell myself that I created the wardrobe of the contemporary woman, that I participated in the transformation of my times.

FashionStyleI am no longer concerned with sensation and innovation, but with the perfection of my style.

SolitudeI live in solitude. I have need of solitude to do the next day's work. I can't be to parties where the noise tires me. I can't speak on the telephone. I must have complete calm.

FashionI hate fashion. I don't have any fun doing it. A show terrifies me.

Self-DisciplineMotivationI told myself repeatedly, 'One day you will be famous.

PeopleI'm not deceived by people, because I don't pay attention to people.

WomanLoveI couldn't love a woman who inspired me to be totally disinterested. If I fell in love with a woman for an artistic reason, or from the point of view of my work, I think it would rob her of something.

FashionWomanIt pains me physically to see a woman victimized, rendered pathetic, by fashion.

FashionConfidenceWomanClothesMenI had noticed men were much more confident in their clothes. So I sought through trouser suits, trench coats, tuxedos, and pea coats to give women the same confidence.

FashionClothesI do not decide that skirts shall be short or long. The shape of the dress itself often dictates the length.

FashionArtI just tried to be an artist in my own metier.

FashionClothesBlack colorMy favorite thing is a black sweater and skirt, which you can wear all the time by changing the accessories.

EleganceWithout elegance of the heart, there is no elegance.

FashionConfidenceBeautyWomanI have always believed that fashion was not only to make women more beautiful, but also to reassure them, give them confidence.

FashionThe big difference between couture and ready-to-wear is not design. It is the fabrics, the handwork, and the fittings. The act of creation is the same.

WomanClothesOver the years I have learned that what is important in a dress is the woman who is wearing it.

FashionWomanStyleBlack colorI love black because it affirms, designs and styles. A woman in a black dress is a pencil stroke.

FashionWomanChanel freed women, and I empowered them.

ClothesHappinessGood clothing is a passport for happiness.

FashionArtI tried to show that fashion is an art. For that, I followed the counsel of my master Christian Dior and the imperishable lesson of Mademoiselle Chanel. I created for my era and I tried to foresee what tomorrow would be.

FashionClothesEleganceLifeDressing is a way of life. It brings you joy. It can give you freedom and liberation, help you to find yourself and to move without restraint. Isn't elegance forgetting what one is wearing?

FashionLifeDressing is a way of life.

FashionClothesI wish I had invented blue jeans. They have expression, modesty, sex appeal, simplicity - all I hope for in my clothes.

FashionClothesEleganceIsn't elegance forgetting what one is wearing?

FashionMy name will be written in fiery letters on the Champs Elysees.

FashionI prefer to shock rather than to bore through repetition.

FashionFashion is like a party. Getting dressed is preparing to play a role.