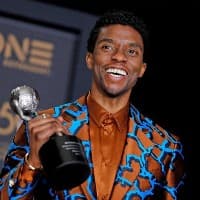 After studying directing at Howard University, he began his career in theatre, winning a Drama League Directing Fellowship and an acting AUDELCO, along with receiving a Jeff Award nomination for his 2005 play Deep Azure. Transitioning to the screen, his first major role was as a series regular on the NBC drama Persons Unknown (2010) and he landed his breakthrough performance in 2013 as baseball player Jackie Robinson in the biographical film 42. He continued to portray historical figures, starring as singer James Brown in Get on Up (2014) and as attorney Thurgood Marshall in Marshall (2017).

Boseman achieved international fame for playing the superhero Black Panther in the Marvel Cinematic Universe (MCU) from 2016 to 2019. He appeared in four MCU films, including an eponymous 2018 film that earned him an NAACP Image Award for Outstanding Actor in a Motion Picture and a Screen Actors Guild Award for Outstanding Performance by a Cast in a Motion Picture. As the first black actor to headline an MCU film, he was also named in the 2018 Time 100.

In 2016, Boseman was diagnosed with colon cancer. He kept his condition private, continuing to act until his death in 2020 from the illness. His final film, Ma Rainey's Black Bottom, was released posthumously the same year to critical acclaim, earning him an Academy Award nomination for Best Actor and a Golden Globe Award for Best Actor – Motion Picture Drama. Boseman also received four nominations at the 27th Screen Actors Guild Awards for his work in Da 5 Bloods and Ma Rainey's Black Bottom, the most for a performer at a single ceremony, winning Male Actor in a Leading Role for the latter.

All quotes by Chadwick Boseman:

I majored in directing. However, I did spend some time at the Schomburg Center for Research in Black Culture in Harlem, so I am somewhat well-versed in African Studies.

I would love to play Jimi Hendrix.

In television you don't have a lot of time to spend with the role or the script. Typically you get a script a week prior to shooting. Sometimes it's even less time, not enough time to dream about the role.

Baseball players need strength but also the ability to make fast-paced, explosive movements, so their training is all about strengthening the tendons around the bone and the joint so you don't tear the muscles from the bones. And so the muscles will have endurance and stability. And flexibility, which helps you throw the ball harder or have the snap to hit a ball. Or to take off quickly to steal a base.

I wasn't a comic book geek as a kid. I read some, but it was just like, "Oh, I have this comic book here." It wasn't like I was collecting them.

Some people would view Jackie Robinson as a very safe African-American, a docile figure who had a tendency to try to get along with everyone, and when you look at his history, you learn that he has this fire that allows him to take this punishment but also figure out savvy ways of giving it back.

I just think people have been very gracious and welcoming me on set, and even off set.

I love all types of music. Jazz, classical, blues, rock, hip-hop. I often write scripts to instrumentals like a hip-hop artist. Music inspires me to write. It's either music playing or completely silent. Sometimes distant sound fuels you. In New York there's always a buzzing beneath you.

I started out as a writer and a director. I started acting because I wanted to know how to relate to the actors. When people ask me what I do, I don't really say that I'm an actor, because actors often wait for someone to give them roles.

Guys are natural problem solvers - they like to have strategies.

I might have had too many friends in my twenties. I probably said yes too much, and then I had to learn how to say no. How to get away in order to work on stuff.

When it comes down to it, I'd rather have an action figure than a Golden Globe.

There's nothing more stressful than your stomach growling.

You might have one thing in your head, but the things you're doing don't really lead down the right road, necessarily. When you're young, you don't want to hear that. You think you can do everything, be all things.

I'm an artist. Artists don't need permission to work. Regardless of whether I'm acting or not, I write. I write when I'm tired in fact, because I believe your most pure thoughts surface.

The best advice about getting older? Just be thankful you're not dead!

You have to cherish things in a different way when you know the clock is ticking, you are under pressure.

I think you realize how much you need to have people that you love. It's not as much about them loving you - it's about you needing to love people.