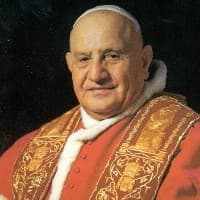 Pope John XXIII (Latin: Ioannes XXIII; Italian: Giovanni XXIII; born Angelo Giuseppe Roncalli, Italian; 25 November 1881 – 3 June 1963) was head of the Catholic Church and sovereign of the Vatican City State from 28 October 1958 until his death in 1963. Giuseppe Angelo Roncalli was one of thirteen children born to a family of sharecroppers who lived in a village in Lombardy. He was ordained to the priesthood on 10 August 1904 and served in a number of posts, as nuncio in France and a delegate to Bulgaria, Greece and Turkey. In a consistory on 12 January 1953 Pope Pius XII made Roncalli a cardinal as the Cardinal-Priest of Santa Prisca in addition to naming him as the Patriarch of Venice. Roncalli was unexpectedly elected pope on 28 October 1958 at age 76 after 11 ballots. Pope John XXIII surprised those who expected him to be a caretaker pope by calling the historic Second Vatican Council (1962–1965), the first session opening on 11 October 1962.

John XXIII made many passionate speeches during his pontificate. His views on equality were summed up in his statement, "We were all made in God's image, and thus, we are all Godly alike." He made a major impact on the Catholic Church, opening it up to dramatic unexpected changes promulgated at the Vatican Council and by his own dealings with other churches and nations. In Italian politics, he prohibited bishops from interfering with local elections, and he helped the Christian Democratic Party to cooperate with the socialists. In international affairs, his "Ostpolitik" engaged in dialogue with the communist countries of Eastern Europe. He especially reached out to the Eastern Orthodox churches. His overall goal was to modernize the Church by emphasizing its pastoral role, and its necessary involvement with affairs of state. He dropped the traditional rule of 70 cardinals, increasing the size to 85. He used the opportunity to name the first cardinals from Africa, Japan, and the Philippines. He promoted ecumenical movements in cooperation with other Christian faiths. In doctrinal matters, he was a traditionalist, but he ended the practice of automatically formulating social and political policies on the basis of old theological propositions.

He did not live to see the Vatican Council to completion. His cause for canonization was opened on 18 November 1965 by his successor, Pope Paul VI, who declared him a Servant of God. On 5 July 2013, Pope Francis – bypassing the traditionally required second miracle – declared John XXIII a saint, based on his virtuous, model lifestyle, and because of the good which had come from his opening of the Second Vatican Council. He was canonised alongside Pope John Paul II on 27 April 2014. John XXIII today is affectionately known as the Good Pope (Italian: il Papa buono).

All quotes by Pope John XXIII:

Consult not your fears but your hopes and your dreams. Think not about your frustrations, but about your unfulfilled potential. Concern yourself not with what you tried and failed in, but with what it is still possible for you to do.

What unites us, is much greater than what divides us.

Whoever has a heart full of love always has something to give.

I want to throw open the windows of the Church so that we can see out and the people can see in.

Do not walk through time without leaving worthy evidence of your passage.

Never Hesitate to hold out your hand; never hesitate to accept the outstretched hand of another.

Prayer is the raising of the mind to God. We must always remember this. The actual words matter less.

I live by the mercy of Jesus, to whom I owe everything and from whom I expect everything.

See everything, overlook a great deal, correct a little.

To keep me from sin and straying from Him, God has used devotion to the Sacred Heart of Jesus in the Blessed Sacrament. My life vows destined to be spent in the light irradiating from the tabernacle, and it is to the Heart of Jesus that I dare go for the solution of all my problems

It often happens that I wake up at night and begin to think about a serious problem and decide I must tell the Pope about it. Then I wake up completely and remember that I am the Pope.

A peaceful man does more good than a learned one.

Before everything else, fidelity to the Church: One, Holy, Catholic, and Apostolic. Jesus did not found several churches, but one single Church.

O Jesus, come back into our society, our family life, our souls and reign there as our peaceful Sovereign. Enlighten with the splendor of faith and the charity of Your tender heart the souls of those who work for the good of the people, for Your poor. Impart to them Your own spirit, a spirit of discipline, order and gentleness, preserving the flame of enthusiasm ever alight in their hearts... May that day come very soon, when we shall see You restored to the center of civic life, borne on the shoulders of Your joyful people.

The Rosary is a magnificent and universal prayer for the needs of the Church, the nations and the entire world.

The solidarity which binds all men together as members of a common family makes it impossible for wealthy nations to look with indifference upon the hunger, misery and poverty of other nations whose citizens are unable to enjoy even elementary human rights. The nations of the world are becoming more and more dependent on one another and it will not be possible to preserve a lasting peace so long as glaring economic and social imbalances persist.

Consult not your fears, but your hopes and your dreams.

If God created shadows it was to better emphasise the light.

Every time I hear anyone speak of the Sacred Heart of Jesus or of the Blessed Sacrament I feel an indescribable joy. It is as if a wave of precious memories, sweet affections and joyful hopes swept over my poor person, making me tremble with happiness and filling my soul with tenderness.

Anybody can be Pope; the proof of this is that I have become one.

The Rosary is a school for learning true Christian perfection.

O Jesus in the Blessed Sacrament, I would like to be filled with love for You; keep me closely united with You, may my heart be near to Yours. I want to be to You like the apostle John. O Mary of the Rosary, keep me recollected when I say these prayers of yours; bind me forever, with your rosary, to Jesus of the Blessed Sacrament. Blessed be Jesus, my love.

In the Universal Declaration of Human Rights (December 1948) in most solemn form, the dignity of a person is acknowledged to all human beings; and as a consequence there is proclaimed, as a fundamental right, the right of free movement in search for truth and in the attainment of moral good and of justice, and also the right to a dignified life.

When I eat alone I feel like a seminarian being punished. I tried it for one week and I was not comfortable. Then I searched through Sacred Scripture for something saying I had to eat alone. I found nothing, so I gave it up and it's much better now.

Prudent is he who can keep silent that part of truth which may be untimely, and by not speaking it, does not spoil the truth of what he said.

Men are like wine - some turn to vinegar, but the best improve with age.

We supplicate all rulers not to remain deaf to the cry of mankind. Let them do everything in their power to save peace. By so doing they will spare the world the horrors of a war that would have disastrous consequences, such as nobody can foresee.

It is easier for a father to have children than for children to have a real father.

Listen to everything, forget much, correct little.

Relations between States, as between individuals, must be regulated not by armed force, but in accordance with...truth, justice and vigorous and sincere co-operation.

Mankind is a great, an immense family... This is proved by what we feel in our hearts at Christmas.

The thought of the presence of God and the spirit of worship will in all my actions have as their immediate object Jesus, God and man, really present in the most holy Eucharist. The spirit of sacrifice, of humiliation, of scorn for self in the eyes of men, will be illuminated, supported and strengthened by the constant thought of Jesus, humiliated and despised in the Blessed Sacrament

The family is the first essential cell of human society.

I have looked into your eyes with my eyes. I have put my heart near your heart.

The conviction that all men are equal by reason of their natural dignity has been generally accepted. Hence racial discrimination can no longer be justified.

The Catholic Church has a dignity far surpassing that of every merely human society, for it was founded by Christ the Lord. It is altogether fitting, therefore, that the language it uses should be noble, majestic, and non-vernacular.

The whole world is my family.

The nations of the world are becoming more and more dependent on one another and it will not be possible to preserve a lasting peace so long as glaring economic and social imbalances persist.

Italians come to ruin most generally in three ways, women, gambling, and farming. My family chose the slowest one.

The true and solid peace of nations consists not in equality of arms, but in mutual trust alone.

Born poor, but of honored and humble people, I am particularly proud to die poor.

The mark of Cain is stamped upon our foreheads. Across the centuries, our brother Abel was lain in blood which we drew, and shed tears we caused by forgetting Thy love. Forgive us, Lord, for the curse we falsely attributed to their name as Jews. Forgive us for crucifying Thee a second time in their flesh. For we knew not what we did.

It is now for the Catholic Church to bend herself to her work with calmness and generosity. It is for you to observe her with renewed and friendly attention.

Here I am at the end of the road and at the top of the heap.

There is a common belief that under modern conditions peace cannot be assured except on the basis of an equal balance of armaments...[but] true and lasting peace among nations cannot consist in the possession of an equal supply of armaments but only in mutual trust.

The deposit of the faith is one thing... the way it is expressed is another.

An angel of Paradise, no less, is always beside me, wrapped in everlasting ecstasy on his Lord. So I am ever under the gaze of an angel who protects and prays for me.

I am able to follow my own death step by step. Now I move softly towards the end.

The council now beginning rises in the Church like the daybreak, a forerunner of most splendid light.

Every man has the right to life, to bodily integrity.

The feelings of my smallness and my nothingness always kept me good company.

Today the universal common good poses problems of world-wide dimensions, which cannot be adequately tackled or solved except by the efforts of public authorities endowed with a wideness of powers, structure and means of the same proportions; that is... on a world-wide basis.

I am made to tremble and I fear!