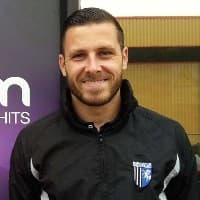 Craig Brian Raymond Stone (born 29 December 1988) is an English footballer who works for Hastings United as a player-coach and also manager of the Gillingham under 18 and under 23 teams.

As a player, he came through the Gillingham youth ranks, making his league debut as a 16-year-old in the 2005–06 season and played in central midfield or at right-back.

All quotes by Craig Stone:

Once upon a time humans faced each other and pulled thoughts from minds, advanced rapidly, revolutionised industry and evolved explosively. Then one day they stopped, and stared at a box. They grew fat and awkward in public, stopped expressing emotions and couldn't figure out how to reverse it: they reinvented themselves from Emperors back into prawns, because someone turned the TV on.

If humans did not manufacture some of their own to appear like better people, people would not aspire to be someone else. They would stop dreaming. And if people didn't dream, they would be awake to discover the wonderful misery of being. There are no singular great people. There is only a small percentage of people manufactured to look significant, for the purpose of creating the feeling of mass insignificance.

I stared up in disbelief at the information my eyes fed my brain, and lost myself to the stars. For the first time in my life I had a greater idea of how infinitesimally small our planet really is and, furthermore, how tiny and insignificant I am in the grand scheme of the vast universe. I took a seat on a rock next to Lily and took in the moment to comprehend the vastness of everything else, and the incredible smallness of I.

Winter has arrived in North London. Snow has settled. The white snow looks beautiful and covers everything my eyes can see, yet beneath the incomprehensible beauty, the snow freezes greenery which struggles to breathe. Green leaves freeze from existence as children scream go faster to fathers who push them along in upside down bin lids, as they make the most of their schools being closed.

I was staying in a hotel in San Francisco for a couple of nights, before flying back to the UK. My hotel was a desperate grey block made from paper and people’s screams. At night the sound of strangers having icy sex echoed off the building and poured through the broken air conditioning, like tiny daggers I couldn't see, reminding me of just the tip of what I was missing.

Our problems come not from what we believe, but from how we believe in what we do.

Only the dying take pleasure in the details of what the healthy fail to notice.

The sharpest tools in the box are not always the best tools for the job.

We only borrow the breaths we take in life. Every breath we borrow we give back, including our last. In the end, no matter how we lived, we all die feeling owed.

Sleep doesn't come easy when a broken twig conjures images of a hulking mental patient snapping the arms off children, over by the bin.

The question should be who do we want to be when we grow up, not what.

All the best bits of a film happen when I'm looking down at my phone. Life, is similar.

At the end of the world the sunset is like a child smashing a pack of crayons into God’s face.

Small quarrels and tensions were expected because of our new environment. Every relationship has them. Each quarrel was soon forgotten and floated away on a wave. And then sometimes, on our silly days, the arguments returned on the wave, but the wave returned taller, a Tsunami, and neither of us knew where to run or what to do.

We dream of the world we could have made, and wake up in the world that we did.

Some days I am the flower beneath the machine. And the machine rolls slowly on, blocking the sun, without a care for what it tramples beneath.

Smile sometimes: it won’t add years to your life, but it will add life to your years.

I want to avoid people, because there’s only one thing worse than being homeless, and that’s people who are not, knowing that you are.

My landlord lives in the flat at the bottom of the stairs. I rent a studio flat from him, and live at the top of the staircase. There are two more flights of stairs and four more flats, but it’s me he is obsessed with.

Anything you want to do is possible; fear is not meant to prevent but to motivate your heart into the life you naturally think is improbable.

Love is a pig dressed as a clown sitting in a bath full of beans: pretty much amazing, once you get over the shock.

Lies are ants, the truth is the sun, and questions are a magnifying glass waiting to be picked up by the curious.

When human men hold an object that makes a powerful noise, or has moving parts, or spins around fast, or has a button they can push (which either screws or nails something) they become Gods in their own heads.They can do anything: they can eat through walls and bring buildings together to form mighty empires.They can build floating cities and flying tin cans.But they still can't make their own beds.

If humans had nothing to fight for, they would fight for nothing.

When someone falls asleep on your chest, but the one really falling is you.

They say beauty is in the eye of the beholder, but us sheep know, true beauty is not in the eye: it lives in the mind.

Sometimes you need to sit in the wrong place to see the right view.

There’s only one Earth, and it’s tiny, but evil human leaders avoid problems they don’t want to resolve by giving them names which make the problems sound like they’re taking place in a different world: they make people not care about other people dying of starvation by calling the place the dying live “the third world.

Love is a grin, a look in the eye whispering what are we doing, appearing in silly arguments had for the sake of them.

There is nothing more deceptive, more grandeur, than the delusion of a single man.

Ask questions then talk over answers, shout loudly you love everyone, try and hug people, confide in them that you are a sheep, offer them the last grass in your pockets. Then watch with a smile as they pretend you aren't there, and whisper you must be crazy, because you want to make friends.

All snowmen look to the sky, knowing their death will be delivered by the horizon. Before dawn, their life becomes the darkest. The moment before the sun burns all. The Snowmen go mental. Kill or be killed. I only just escaped the violent puddles, the sticks and stones. The broken carrot noses.

Better to live dreaming, than dream of living.

Nobody has to do anything wrong to end up living a life that feels like it’s not their own, all they have to do is take a step back, and hope for the best.

The word begone is a Russian doll. A small, single word, which contains so many others; and when all the smaller words inside line up, they look like a bridge: Be Beg Ego Go On One.

My eyes open after my mind. All eyes always do.

I wonder if I'm being paranoid. I tell myself I'm not, and then ask myself how I can be so sure? I don't know the answer, so I go back to wondering if I am.