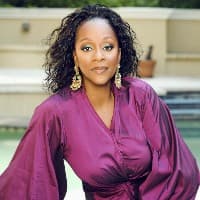 Regina Elaine Belle (born July 17, 1963) is an American singer-songwriter who started her career in the mid-1980s. Known for her singles "Baby Come to Me" (1989) and "Make It Like It Was" (1990), Belle's most notable for two hit duets, both with Peabo Bryson: "Without You", the love theme from the comedy film Leonard Part 6, recorded in 1987 and "A Whole New World", the main theme of the Disney's animated feature film Aladdin, recorded in 1992, with which Belle and Bryson won the Grammy award. The theme song "Far Longer than Forever" from the animated movie The Swan Princess, performed with Jeffrey Osborne, was nominated for a Golden Globe in 1995 for Best Original Song.

All quotes by Regina Belle:

I want to be who I am now. I rock my gray hair because it is a blessing. I colored mine for many years, but I've gotten compliments from so many men and women about being brave enough to sport the gray. I even wear it on the cover of my record. I am comfortable in my skin and I want listeners to feel that as well.

We have multiple Black men and women losing their lives simply for being. Who gets to say you don't get to live anymore? I don't understand that. And it doesn't stop there. Can we go into the school system and look at the imbalance of what our children are learning? We are functioning crazy, people.

It feels like I am covering all aspects of what I do and operating in the gift God gave me. I believe God has freed me up to go in some other places because I am responsible and understand the power of music.

When I went into gospel, I didn't think it was respectful to still do R&B and gospel at the same time. It is not because of anything written or the church going off on me. It was more of Regina putting stipulations on herself and stating where she couldn't go because she got this calling in her life.

I really want to get the word out that I am still relevant and have something to say.