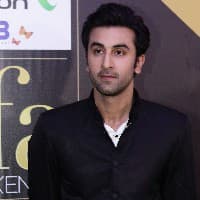 Indian actor known for his work in Hindi-language films

Ranbir Kapoor (born 28 September 1982) is an Indian actor known for his work in Hindi-language films. He is one of the highest-paid actors of Hindi cinema and has featured in Forbes India's Celebrity 100 list since 2012. Kapoor is the recipient of several awards, including six Filmfare Awards.

The son of actors Rishi Kapoor and Neetu Singh, and the grandson of actor-director Raj Kapoor, Kapoor pursued filmmaking and method acting at the School of Visual Arts and the Lee Strasberg Theatre and Film Institute, respectively. He subsequently assisted Sanjay Leela Bhansali on the film Black (2005) and made his acting debut with Bhansali's tragic romance Saawariya (2007), a critical and commercial failure. Kapoor rose to prominence in 2009 with his performances in the coming-of-age film Wake Up Sid and the romantic comedy Ajab Prem Ki Ghazab Kahani. His most widely seen film in this period came with the political drama Raajneeti (2010).

Kapoor's performances as a troubled musician in Rockstar (2011) and a cheerful deaf-and-mute man in Barfi! (2012) earned him two consecutive Filmfare Awards for Best Actor. A leading role opposite Deepika Padukone in the romantic comedy Yeh Jawaani Hai Deewani (2013) established him as a star. This was followed by a series of commercial failures, with the exception of the romance Ae Dil Hai Mushkil (2016). This changed in 2018 when Kapoor portrayed Sanjay Dutt in Rajkumar Hirani's biopic Sanju, one of the highest-grossing Indian films, for which he won another Best Actor award at Filmfare.

In addition to his acting career, Kapoor supports charities and causes. He is also a co-owner of the Indian Super League football team Mumbai City FC. He is married to the actress Alia Bhatt.

All quotes by Ranbir Kapoor:

I want to become a superstar, but for that, I first have to be a super actor.

I truly believe that God has given us few brain cells, and you have to direct them to the right things that make you happy.

Happiness exists only if you have a lot of people to share it with.

I want to reach the heights of stardom beyond my imagination.

I believe that working with good people matters because then the work environment is good. If there is a sense of respect and belief among the people you work with, that is when good work is done.

I am feeling as if my parents are my children. I'm extremely protective about both of them while on the set

I want to become a superstar, but for that, I first have to be a super actorThe word 'superstar' these days is used for anybody who delivers a Friday hit. Amitabh Bachchan and the Khans have worked for many years. They have also given back to society. I am just 14 films and six years old in the industry. I know I'll achieve it in a few years from now and I'm arrogant enough to say that,but now isn't the time.

I'm quite detached from failure and success. Once a shooting is done, I kind of close that chapter in my life.

On the set of Besharam I had to refrain from smoking, out of respect for my parents

I myself am a great James Dean fan. He had this aura and enigma about him.

I haven't decided when I'll get married.

I am young enough to try my hands at all kinds of cinema.

I'll attend all my team's games