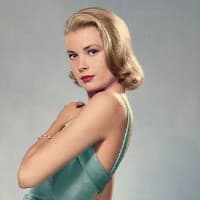 Grace Patricia Kelly (November 12, 1929 – September 14, 1982) was an American actress who, after starring in several significant films in the early to mid-1950s, became Princess of Monaco by marrying Prince Rainier III in April 1956.

Kelly was born into a well-known Catholic family of Irish and German origin in the U.S city of Philadelphia. After graduating from the American Academy of Dramatic Arts in 1949, Kelly began appearing in New York City theatrical productions and over 40 live drama productions broadcast in early 1950s Golden Age of Television. She gained stardom from her performance in John Ford's adventure-romance Mogambo (1953), for which she was nominated for an Academy Award for Best Supporting Actress. She won the Academy Award for Best Actress for her performance in the drama The Country Girl (1954). Other notable works include the western High Noon (1952), the romantic comedy High Society (1956), and three consecutive Alfred Hitchcock suspense thrillers: Dial M for Murder (1954), Rear Window (1954), and To Catch a Thief (1955). Kelly worked with some of the most prominent leading men of the era, including Gary Cooper, Clark Gable, Ray Milland, James Stewart, Bing Crosby, William Holden, Cary Grant, Alec Guinness, and Frank Sinatra.

Kelly retired from acting at age 26 to marry Rainier, and began her duties as Princess of Monaco. Hitchcock hoped that she would appear in more of his films which required an "icy blonde" lead actress, but he was unable to coax her out of retirement. The Prince and Princess had three children: Princess Caroline, Prince Albert, and Princess Stéphanie. Princess Grace retained her link to America by her dual U.S. and Monégasque citizenship. Her charity work focused on young children and the arts, establishing the Princess Grace Foundation to support local artisans in 1964. Her organization for children's rights, AMADE Mondiale, gained consultive status within UNICEF and UNESCO. Her final film contribution was in 1977 to documentary The Children of Theatre Street directed by Robert Dornhelm, where she served as the narrator. The documentary was nominated for an Academy Award for Best Documentary Feature.

Kelly died aged 52 at Monaco Hospital on September 14, 1982, from injuries sustained in a car crash the previous day. She is listed 13th among the American Film Institute's 25 Greatest Female Stars of Classical Hollywood Cinema. Her son, Prince Albert, helped establish the Princess Grace Awards in 1984 to recognize emerging performers in film, theatre, and dance.

Actors about themselvesNew YorkMy real difficulty was to become a normal person again, after having been a movie actress for so long. For me, at the time I was living in New York and Hollywood, a normal person was someone who made movies.

New YorkIf anybody starts using me as scenery, I'll return to New York.

HappinessLifeI've had happy moments in my life, but I don't think that happiness-- being happy-- is a perpetual state that anyone can be in. Life isn't that way.

SuccessActors about themselvesI hated Hollywood. It’s a town without pity. Only success counts. I know of no other place in the world where so many people suffer from nervous breakdowns, where there are so many alcoholics, neurotics and so much unhappiness.

PersistenceMy father had a very simple view of life: you don’t get anything for nothing. Everything has to be earned, through work, persistence and honesty. My father also had a deep charm, the gift of winning our trust. He was the kind of man with whom many people dream of spending an evening.

MarriageBefore my marriage, I didn’t think about all the obligations that were awaiting me. My experience has proved useful and I think that I have a natural propensity to feel compassion for people and their problems.

FreedomThe freedom of the press works in such a way that there is not much freedom from it.

One way in which all of us can help to combat the current wave of public indecency which threatens to undermine Western civilization is to concentrate upon and increase the solidarity of the family. This solidarity begins with a child at the mother's breast.

If there is one thing that is foreign to me it is shopping for pleasure. On the other hand, I believe that it is right to honor all those who create beautiful things and give satisfaction to those who see me wearing them.

I get up at seven for the make-up, Rita Hayworth at six, Joan Crawford and Bette Davis at five. I don’t want to know the time when I’ll have to come to the studio even earlier.

At times I think I actually hate Hollywood. I have many acquaintances there, but few friends.

Other women looked on me as a rival. And it pained me a great deal.

Anger and anger can not solve any problem.

I was hired to be an actress, not a personality for the press.

It would be very sad if children had no memories before those of school. What they need most is the love and attention of their mother.

For a woman, forty is torture, the end.

The concept of what I want to do as an artist has not changed at all. When I was seven years old, I fell in love with writing songs and knew I wanted to make music and play it for a lot of people. Back then I said I wanted to heal people with music and bring them together. I called my music, "PAZZ," which means pop and jazz. To this day, all of those things still ring crystal clear.

Having a [teenage] daughter is like riding a young horse over an unknown steeplechase course. You don't know when to pull up the reins, when to let the horse have its head - or what.

My parents, despite their serious attitude toward life in general, and that of their children in particular, were very broadminded people. There was no such thing as a bad profession for them. As I was their daughter, they knew that, whatever profession I chose, I would do it well. That was enough for them. There was always trust among the Kellys.

I'll be goddamned if I'm going to stay in a business where I have to get up earlier and earlier and it takes longer and longer for me to get in front of a camera.

As an unmarried woman, I was thought to be a danger.

I work hard in social work, public relations, and raising the Grimaldi heirs.

I don't want to be married to someone who feels inferior to my success or because I make more money than he does.

I’ve always treated my children as beings in their own right. I respect their feelings and aspirations entirely.

I don't like yelling and fighting, and I can't quarrel.

I would like to be remembered as someone who accomplished useful deeds, and who was a kind and loving person. I would like to leave the memory of a human being with a correct attitude and who did her best to help others.

I avoid looking back. I prefer good memories to regrets.

I am basically a feminist. I think that women can do anything they decide to do.

When at last I took the time to look into the heart of a flower, it opened up a whole new world; a world where every country walk would be an adventure, where every garden would become an enchanted one.

I love walking in the woods, on the trails, along the beaches. I love being part of nature. I love walking alone. It is therapy. One needs to be alone, to recharge one's batteries.

I've been accused of being cold, snobbish, distant. Those who know me well know that I’m nothing of the sort. If anything, the opposite is true. But is it too much to ask to want to protect your private life, your inner feelings? Lots of things touch me and I don’t want to be indiscreet.

A person has to keep something to herself or you're life is just a layout in a magazine.

The pearl is the queen of gems and the gem of queens.

Our life dictates a certain kind of wardrobe.

Hollywood amuses me. Holier-than-thou for the public and unholier-than-the-devil in reality

Why getting angry? Getting angry doesn’t solve anything… I don’t like yelling and fighting and I can’t quarrel, I prefer to let it drop… When people use disagreeable words, I feel crushed and remember them for a long time.

When I married Prince Rainier, I married the man and not what he represented or what he was. I fell in love with him without giving a thought to anything else.

Emancipation of women has made them lose their mystery.

Women's natural role is to be a pillar of the family.

I loved acting. I didn’t particularly like being a movie star.

My nerves could use a drink.

A woman needs ropes and ropes of pearls.

When Ava Gardner get in a taxi, the driver knows at once she’s Ava Gardner. It’s the same for Lana Turner or Elizabeth Taylor, but not for me. I’m never Grace Kelly, I’m always someone who looks like Grace Kelly.

Getting angry doesn't solve anything.

This is one night I wish I smoked and drank.

Although I’ve played a wide variety of roles, I’ve never had the chance to act in a story written specially for me. It’s a pity as they are the only stories that really let you reveal your personality.

What I've learned in the past 12 years of recording (I made my first CD at 12) is how important it is to find one's authentic voice.

I don`t want to dress up a picture with just my face.

It's easy to record songs. Anyone can make a track on garage band. I've been on the search to find that incredibly authentic place of sound and intention that only I can bring. Everyone has their own expression. I'm still on that quest and I hope to always be.