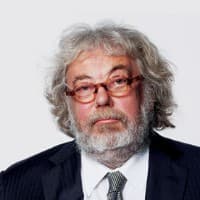 Felix Dennis (27 May 1947 – 22 June 2014) was an English publisher, poet, spoken-word performer and philanthropist. His company, Dennis Publishing, pioneered computer and hobbyist magazine publishing in the United Kingdom. In more recent times, the company added lifestyle titles such as its flagship brand The Week, which is published in the UK and the United States.

HappinessThere are as many forms of happiness as sorrow, though most prove fleeting.

FearFear not. For fear itself is fed by fear, and all fears pass. Did no one tell you so? Come take my hand, my friend, and we will peer into this fear's abyss. And jump! And know.

ArtPoetry is one of the oldest of all art forms, and one of its powers for shamans and tribal leaders was the mnemonic.

Anyone not busy learning is busy dying.

The belief that you have a great idea is not worth cuckoo spit. Ideas are ten a penny while the ability to execute counts for a great deal more.

Say to yourself: The world is full of money. Some of it has my name on it. All I have to do is collect it.

Teamwork is the glue which binds losers together

For a start, the salary begins to have an attraction and addictiveness all of its own. A regular paycheck and crack cocaine have that in common. In addition, and more to the point, working too long for other people can blunt your desire to take risks. This last factor is crucial, because the ability to live with and embrace risk is what sets apart the financial winners and losers in the world.

Without self belief nothing can be accomplished. With it, nothing is impossible.

The bottom line is that if I did it, you can do it. I got rich without the benefit of a college education or a penny of capital but making many errors along the way. I went from being a pauper.. a hippie dropout on the dole, living in a crummy room without the proverbial pot to piss in, without even the money to pay the rent, without a clue as to what to do next.. to being rich...

People who grow rich almost always improve their sex life. More people want to have sex with them. That's just the way human beings work. Money is power. Power is an aphrodisiac. Money did not make me happy. But it definitely improved my sex life.

Very, very few entrepreneurs who accept a 51 percent partner in a new venture will get rich if they are also expected to run it. Control is mandatory.

Whatever qualities the rich may have, they can be acquired by anyone with the tenacity to become rich.

Good ideas are like Nike sports shoes. They may facilitate success for an athlete who possesses them, but on their own they are nothing but an overpriced pair of sneakers. Sports shoes don't win races. Athletes do.

Obviously, waste disposal is an enormous and fantastic industry.

Most of the worst errors I made in my life came from forgetting to act small.

People really do not have time to read all the newspapers in the world and all the sites that we now commonly use on the web. There is no possibility of keeping up.

When you come across real talent, it is sometimes worth allowing them to create the structure in which they choose to labor. In nine cases out of ten, by inviting them to take responsibility and control for a new venture, you will motivate them to do great things.

I have an over-attachment to precision, which is why I've sold more magazines than any man alive.

If it flies, floats or fornicates, always rent it.. it's cheaper in the long run.

I should have liked to get married, but over many decades I have lived essentially alone. I go to sleep when I'm tired, get up when I wake up, have my food prepared when I'm hungry. I can't bear the thought that I'd have to coincide, make an effort.

You'll never get rich by working for your boss.

Poetry forces a writer to condense and crystallise his thoughts and often represents a short cut to truths unsuspected by the author himself.

I have one talent, and that's figuring out what people want about two minutes before they know it themselves.

Rich people always have a certain degree of debt. Apparently it helps to reduce taxes. I'm not so hot on the bean-counting side.

If the influence of luck is a delusion, then all I can say is that the delusion is virtually universal.

America is not the center of the universe.

I thoroughly object to getting old. If you could let me be 16 again, I'd give you everything I've got and everything I'll ever have.

People who get trapped in the tunnel vision of making money think that is all there is to life.

I love the business of business; I love the risk raking.

I'm an entrepreneur, a businessman. I've got a lot of money, and that doesn't go very well with the whole 'starving artist in a garret' routine.

I loathe and detest movies and television and don't watch any. I do not have the time.

America is an empire. I hope you know that now. All empires, by definition, are bumbling, shambolic, bullying, bureaucratic affairs, as certain of the rightness of their cause in infancy, as they are corrupted by power in their dotage.

When I was young I wanted to be the greatest blues singer of all time. I wrecked my education and left home for it.

You can actually be bored stiff while you're dying.

I don't take investment advice from wealth managers. I have grown several businesses from scratch and amassed many millions from my publishing empire - why would I take advice from someone who has never experienced that?

I couldn't care less what anyone's 'perception' of me is. I'm too long in the tooth to care.

False praise is worse than no praise.

Great Expectations [book by Charles Dickens] has been described as "Dickens's harshest indictment of society." Which it is. After all, it's about money. About not having enough money; about the fever of the getting of money; about having too much money; about the taint of money.

Do not be shy to call customers who owe you money. It works.

Having a great idea is simply not enough. The eventual goal is vastly more important than any idea. It is how ideas are implemented that counts in the long run

No woman or girl is going to want to spend time looking at pretty dresses on the Internet. Vogue is going to be around for a long time to come.

Native trees are so important to our ecosystem.

I am absolutely convinced that my life was redeemed by poetry.

It's a long, slow sunset for ink-on-paper magazines, but sunsets can produce vast sums of money.

Publishing magazines for yourself is not good business, man.

You shouldn't go around the world behaving ruthlessly when you don't have to. Sometimes you do have to. There is only so much pie to go around. If you're going to take more than your fair share of pie, as socialists would look at it, then someone else is not getting his. That means you've got to take it away from them.

Few things in life are certain except death and being taxed.

Overhead will eat you alive if not constantly viewed as a parasite to be exterminated. Never mind the bleating of those you employ. Hold out until mutiny is imminent before employing even a single additional member of staff. More start-ups are wrecked by overstaffing than by any other cause, bar failure to monitor cash flow.

I've always noted with some awe the reading habits of the Australian public. Australians read more newspapers and magazines per head of population than almost any other country in the world.

I have been portrayed by actors in three television documentaries, two plays, one musical and a film. It's no fun watching yourself being traduced and imitated by an actor.

Discourse has ended in America. It's all just shouting and ranting and demonization. Do you know how the rest of the world laughs at you guys? Have you got any idea? They're just rocking with laughter night and day.

The beginnings of a forest is one of the ugliest things on the planet. It's bleak and your neighbours hate you.

I only buy a computer when it's two years old, after the glitches have been worked out.

As with the onset of sudden celebrity, for the newly rich, the world often becomes a darker, narrower, less generous place; a paradox that elicits scant sympathy, but is nonetheless true.

I hear poets complaining: 'We face what our forebears did not face. We face TV. We face radio. We face this and that.'

'The Week' is my favourite magazine. Everyone from presidents to CEOs of companies love it, politicians, people in the massive charity business in America, in the arts and even more especially in the media.

It's very difficult to be continuously charitable in a capitalistic society. You've also got to make sure that you can pay everyone who works for you.

I want to prove that if you write in strict meter and rhyme about subjects people care about, they will buy poetry.

America, ladies and gentlemen, has done more for me financially than Britain ever has, or ever could have done.

Computers are wasteful of paper and time. Once, we'd get documents with a few errors. Now, people make hundreds of copies until each sheet is flawless and memos are duplicated endlessly. Managers get swamped with emails.

Everything I publish is for my readers.

The age of celebrity editors and monstrous staffing are over.

Unless you are completely retired, earning money is the best form of wealth preservation.

With the greatest of respect, I have watched Apple from the day it started. I was publishing magazines about the Apple II before most people had ever heard what a personal computer was.

For me, temptation is life and I have a gargantuan appetite for everything.

No poetry that I'm aware of, however bad or glorious, has ever left somebody a worse person than they were before they read it.

You don't have to live in a garage to write great poetry.

Human beings are definitely changing the planet, but how much impact they are having on climate, I don't know and I don't care.

This modern mania for interfering in other's lives, usually under the guise of health and safety concerns, is highly irritating and counterproductive. Down with the nanny state.

I cannot abide being bored.

With a poetry book I can send 100 copies out to reviewers and other people, and even do it in advance and get their response. It's difficult with iPad: how do you send it out for free, and how do you even disseminate it before it goes into their store?

Talent is indispensable, although it is 'always' replaceable. Just remember the simple rules concerning talent: Identify It, Hire It, Nurture It, Reward It, Protect It. And when the time comes, Fire It.