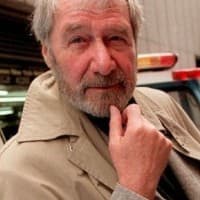 Evan Hunter, born Salvatore Albert Lombino,(October 15, 1926 – July 6, 2005) was an American author and screenwriter best known for his 87th Precinct novels, written under his Ed McBain pen name, and the novel upon which the film Blackboard Jungle was based.

All quotes by Ed McBain:

Readers are what it's all about, aren't they? If not, why am I writing?

A detective sees death in all the various forms at least five times a week.

Depending on what I'm working on, I come to the writing desk with entirely different mindsets. When I change form one to the other, it's as if another writer is on the scene.

I know that all cops are not sterling characters. But you have to have someone to root for. I balance it with rotten cops who will take a bribe, who will beat somebody up.

I enjoy what I do every minute of the day, even when the going gets tough. When I first began writing, I used to work at a desk in the bedroom, of a small development house. My three sons all under the age of 3 would come running in and out of the room every minute.

I began using pseudonyms early in my career, when I was being paid a quarter a cent a word for my work, and when I had to write a lot to earn a living. Sometimes I had three or four stories in a single magazine without the editor knowing they were all by me.

I try to keep all my novels in print. Sometimes publishers don't agree with me as to their worth.

I never take ideas from the headlines. I feel that if a story is good enough, a real story that is, then it's already been covered by the media, and if it's not good enough, why would I want to bother with it?

Changing writing styles is like an actor taking on a different part.

We need leaders who can reflect theologically and help develop more robust thinking that understands how context affects our understanding of God, humankind, the fall, and redemption.

In the US, we consider our foreign policy as something rooted in the protection of American ideals of democracy and human development. However, we often fail to see the damaging consequences, many of which may be unintended, on others - including Christians - living in other parts of the world.

Palestinian believers have a unique experience with US foreign policy and our close ties with Israel. This alliance has many layers, but given the strong support of the US church, and the frequency of religious language surrounding these policies, Palestinian Christian friends raise important and challenging questions about how we understand the intertwining of theology and politics in the US.

Formal theological teaching in Africa is deeply rooted in the Western missionary movement . However, in practice, the church wrestles with how to bring theology to bear on the realities it faces in the context.

I've never been a cop nor hope to be a cop, thanks.

I wanted to be an artist. I was studying art. I wanted to be a great painter. When I went into the Navy, there wasn't much to draw at sea. So I began writing, and I began reading a lot.

The rise of the prosperity gospel is one of the great challenges to the true message of Jesus Christ. While not an expressly Western problem, the promises of this false teaching are often deeply rooted in Western materialism and worldly wealth. Teachers focus on a temporal reward as evidence of God's blessing, often ignoring the greater issues of justice, reconciliation, and redemption so needed in the world today.

In conversations and visits with friends from Africa, Asia, Latin America, the Middle East, and Eastern Europe I am often struck by the gaps in our Western theological approaches. The most common texts used in evangelical schools have been written in the US, UK, and Australia. However, they miss some fundamental contextual issues.

We need voices that help us critique our social, political, and economic views through Kingdom lenses. The women and men who compose the global body of Christ can help challenge us in very important ways.

McKinty is an exciting new talent.

I would certainly never suggest that any lesbian should be ashamed of her sexual preference.

It seemed to me... that the only valid people to deal with crime were cops, and I would like to make the lead character, rather than a single person, a squad of cops.

Its a matter of style. The Evan Hunter style and the Ed McBain style are very, very different.