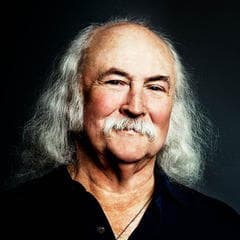 David Van Cortlandt Crosby (born August 14, 1941) is an American singer-songwriter and musician. In addition to his solo career, he was a founding member of both the Byrds and Crosby, Stills & Nash.

Crosby joined the Byrds in 1964. Bob Dylan gave the band their first number one hit in April 1965 with "Mr. Tambourine Man". Crosby appeared on the Byrds' first five albums and produced the original lineup's 1973 reunion album. In 1967 he joined Buffalo Springfield on stage at the Monterey Pop Festival, which contributed to his dismissal from the Byrds. He subsequently formed Crosby, Stills & Nash in 1968 with Stephen Stills (of Buffalo Springfield) and Graham Nash of the Hollies. After the release of their debut album CSN won the Grammy Award for Best New Artist of 1969. Neil Young joined the group for live appearances, their second concert being Woodstock, before recording their second album Déjà Vu. Meant to be a group that could collaborate freely, Crosby and Nash recorded three gold albums in the 1970s, while the core trio of CSN remained active from 1976 until 2016. CSNY reunions took place in each decade from the 1970s through the 2000s.

Songs Crosby wrote or co-wrote include "Lady Friend", "Why", and "Eight Miles High" with the Byrds and "Guinnevere", "Wooden Ships", "Shadow Captain", and "In My Dreams" with Crosby, Stills & Nash. He wrote "Almost Cut My Hair" and the title track "Déjà Vu" for Crosby, Stills, Nash & Young's 1970 album. He is known for his use of alternative guitar tunings and jazz influences. He has released six solo albums, five of which have charted. Additionally he formed a jazz-influenced trio with his son James Raymond and guitarist Jeff Pevar in CPR. Crosby's work with the Byrds and CSNY has sold over 35 million albums.

Crosby has been inducted into the Rock and Roll Hall of Fame twice: once for his work in the Byrds and again for his work with CSN. Five albums to which he contributed are included in Rolling Stone's The 500 Greatest Albums of All Time, three with the Byrds and two with CSN(Y). He is outspoken politically and has been depicted as emblematic of the 1960s' counterculture.

Crosby is the subject of the 2019 documentary David Crosby: Remember My Name, which was produced by Cameron Crowe.

FearI'm not givin' in an inch to fear.

MusicI love music. I love making songs. I feel like I've been given a path where I can contribute, where I can protest if somebody does something really obviously wrong or inhuman right in front of me, where I can make a difference. Where I can most especially elevate, make you happy, elevate the condition, elevate the thing.

MusicLoveI think music is a lifting force, I think love is the lifting force in the human condition. I think you see someone loving on their child, and it moves you, and you can't help it.

LifeGenerally we don't really consciously do it as a purpose-driven thing. ... It's really just a response to life.

MusicMy songs emerge unbidden and unplanned and completely on a schedule of their own...We have, all of us, over the years, written things that responded to the world as it slapped us in the face. Me and Nash, singing "To the Last Whale" and "Find the Cost of Freedom". Stills coming up with "For What It's Worth". These came right out of the news. People have accused us of taking stances and the truth is we don't.

Acting workMusicMy father being in the movie business, I thought being an actor would be great. But when I started singing to people in coffeehouses, you know, singing folk music and then, later, singing songs that I started to write myself, I felt more than an affinity for it.

WomanMusicThe easiest way to get laid by a girl, or get rid of her, is to write a song about her.

AngerI don't think being angry is useful or healthy, and usually when I get angry, my brain just goes right out the window. Boom, as soon as the adrenaline hits, instant stupid. Just add water and mix.

IdeaMusicI think ideas are still the most powerful things on the planet, and music is a great way to transmit them.

Actors about their rolesActing workI am having so much fun performing, I feel almost guilty. I think, my God, I hope no one comes and busts me for this.

TimeMoneyDon't waste the time. Time is the final currency, man. Not money, not power - it's time.

PeopleMusicThere are a lot of people who look great but can't sing.

CSNY is a little like putting seven pounds of stuff in a three pound bag.

I do like to smoke pot. I think it's good.

Jimi Hendrix could play better than our best guys and he did it while he was dancing while being completely outrageous.

Alec Guinness classed up that movie [Star Wars]. Nobody else in that movie knew how to act. Nobody else had a clue of what they were doing. The young guy was a complete loss, absolutely couldn't act his way out of a bag, but Alec Guinness carried that movie. He was such a class act that it elevated the film to be a joy to watch.

I can't legislate a song into being, it just will not happen for me.

Now record companies are run by lawyers and accountants. The shift from the one to the other was definitely related to when the takes started to get big.

Sometimes the entire thing comes out in one burst. Sometimes you hack away at a thing for years before you get something that satisfies you.

I produced her first album, and I was breaking up with her at the time. That was not comfortable. Falling in love with Joni Mitchell is a bit like falling into a cement mixer!

Elections aren't supposed to be for sale... it's that simple.

The people who run record companies now wouldn't know a song if it flew up their nose and died. They haven't a clue, and they don't care. You tell them that, and they go, Yeah? So, your point is?

There's a site on the internet that swears up and down that I'm worth $46 million and that I'm one of the most highly paid and richest guys in show business. I really wish it was true! Then there's those where it's like my mother was raped by a martian and that kind of thing. National Enquirer-type stuff. They just make it up.

Describing Woodstock as the "big bang," I think that's a great way to describe it, because the important thing about it wasn't how many people were there or that it was a lot of truly wonderful music that got played.

[Calling you a] star is just a trick. It's like a straw man thing. They [people] set you up just to knock you over. It's bull. You avoid it, I avoid it.

You tend to write as you get older about family love more than you write about romantic love or ooh baby. ... The stuff that you want to celebrate about humanity has always been there and probably always will be.

Right away I thought I'd been hit by a hand grenade ... her (Joni Mitchells') voice, those words ... she nailed me to the back wall with two-inch spikes... I promptly fell in love with her...

The greatest thing is the internet and that means that anybody, you have just as much access as I do. And you can make your little tape and work on it and work on it until you got it the way you want it. And then you can put it on the net. And if it's any damn good somebody's gonna notice. That's happened over and over again now. To me that's good. That's good access that isn't controlled by the companies. I think that's a great thing.

When did I decide to go into business? Well, it wasn't a business, when I decided. It was simply a need to sing.

Neil Young played Helpless, and by the time he finished, we were asking him if we could join his band

I write very sporadically. I write sometimes three things in a week and then nothing for a year. I make a space for it but I don't push it. They just come and they come.

While I was an addict, I didn't write anything. I didn't have the attention span or the will.

I want to go to Africa and find a really great hotel with good food right above a water hole where I can sit, have breakfast, and just watch the elephants play in the water.

There has never been a communism that worked. They were all dictatorships or oligarchies, every single one.

I'd have to say that Kenny White has earned a place among my favorite singer/songwritersand particularly, lyricists. As we say in the trade “he goes deep.” A true wordsmith AND musician who reveals a fine sense of humor, as well. Put on your headphones and listen carefully.

Sailing became one of the mainstreams of my life. I suppose my father was an influence. I remember seeing a photo of him at home sailing a big boat to Bermuda in his 20s. I still have it.

I come from a school of people, folk singers, and the tradition there is troubadours, and you're carrying a message. Admittedly, our job is partly just to make you boogie, just make you want to dance. Part of our job is to take you on a little voyage, tell you a story.But part of our job is to communicate the way a town crier did: It's 12:00 and all is well, or it's 11:30 and the whole Congress is sold. It's part of the job.

The fact is that all the recording science and technology in the world is no substitute for a good song or for real feeling. Music is about feeling and if there isn't any genuine feeling, if the song isn't about anything that anyone gives a damn about, there's nothing you can do. All the technique that exists won't make it any good; it'll just make it technological. All the production values you add won't do anything except make it glossy.

When I was 11 years old, my parents wanted me to do something besides get in trouble. So they enrolled me in sailing classes at the Sea Shell Association in Santa Barbara, Calif. From the moment I climbed into that 8-foot dinghy in 1952, I knew instinctively what to do and sensed I had done it before.

My songs emerge from my life, or wherever they do, unbidden and unplanned and completely on a schedule of their own.

I have a pretty clear picture of the whole weight of my life, and there are things that I've done that are good, and I'm proud of them. There are things that I'm really not proud of, and that they, you have to look at me with a perspective, and I try really hard to do that, to keep from thinking I'm cool and ever so smart.

All wars would end immediately if the various chiefs of state dropped a little LSD.

I've been given a gift [musical talent] - don't misuse it. I spent a lot of time just wasting that talent, not treasuring it, not valuing it, not respecting it, just taking it for granted. That was a hard lesson to learn. It doesn't come for free. Don't do that. Treasure it, respect it, treat it as a responsibility that you've been given, and enjoy the hell out of it.

"It can't happen here" is number one on the list of famous last words.

It's hard to bullshit the ocean. It's not listening, you know what I mean.