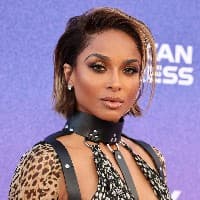 Ciara Princess Wilson (born October 25, 1985) is an American singer. Born in Fort Hood, Texas, her family eventually settled in Atlanta, Georgia, where she joined the girl group Hearsay. She later signed a publishing deal and befriended producer Jazze Pha, who recorded demos that would appear on her debut album. With his help, Ciara signed a record deal with LaFace Records.

In 2004, Ciara released her debut studio album, Goodies, which spawned four singles: "Goodies" (featuring Petey Pablo), "1, 2 Step" (featuring Missy Elliott), "Oh" (featuring Ludacris) and "And I". "Goodies" topped the Billboard Hot 100, and also topped the charts in the United Kingdom, while "1, 2 Step" and "Oh" both peaked at two on the Hot 100 and charted within the top five in the UK. The album was certified triple platinum by the Recording Industry Association of America (RIAA) and garnered two nominations at the 48th Annual Grammy Awards. Ciara was also featured on Missy Elliott's "Lose Control" and Bow Wow's "Like You", both of which reached number three on the Billboard Hot 100. In 2006, Ciara released her second studio album, Ciara: The Evolution, which spawned the hit singles "Get Up" (featuring Chamillionaire), "Promise", "Like a Boy" and "Can't Leave 'em Alone" (featuring 50 Cent). The album reached number one in the U.S. and was certified platinum.

In 2006, Ciara made her film debut in All You've Got, and later appeared in the films Mama, I Want to Sing! (2012) and That's My Boy (2012). In 2013, she had a recurring role in the US TV series, The Game. In 2016, Ciara signed a signed a modeling contract with IMG. That year, she became a Global Brand Ambassador for the cosmetics giant Revlon, and she married quarterback Russell Wilson.

All quotes by Ciara:

Being beautiful is all in the attitude, it's about confidence.

Don't limit yourself because you are a woman because you can do exactly the same that a guy could do.

I think it takes a lot of confidence to be comfortable in being vulnerable.

The tongue is very powerful, so what you say really is, and I really believe that. So I just try to say good things, and then things like this happen.

If a person uses the word 'sorry' loosely then of course it loses its value.

Cute accessories always help bring out your outfit and pull it all together.

More than anything, I realize I've been blessed to make great music.

Everyone loves to dance. I've realized that's a part of what I do more and more every day.

The best beauty trick I've learned is "less is best." For example, when I'm preparing to go out for the day, something as simple as putting some concealer underneath my eyes with a bit of highlighter automatically gives me a natural and fresh look. If I do that with a little bronzer, then I'm good to go for the day.

Being young, and having your mom come to school with the laced-up hats and the crazy outfits are definitely moments to remember.

As we get older, it's important for us to help hand back some of what we've gained as we've grown older. It should be one of your responsibilities - it's almost like being a mentor.

I feel the sexiest when I'm by myself, walking around nude. I have this new obsession with nudity, it's really weird. It may sound weird, but I just really love embracing the body.

I love shopping! I'm impatient though. I'll go to the mall and in 30 minutes be ready to go.

Anything is possible for women, including being a presidential nominee.

I believe 2016 is the Year of the Woman and now more than ever, it is our time to accomplish anything and everything.

Dancing - however you do it, even if it's in your living room - is a great workout.

Real music to me is real; it's what you feel.

The swimsuit and jeans look is my favorite. It was a big part of my introduction to the world as an artist. It was so cool to see girls wearing swimsuits with their jeans during that time.

I'm a military baby, and it makes me proud to know that I'm the child of two parents that served our country. I feel very connected to our country, and I'm honored to be an American.

When I'm in focus mode, I do training six times a week. Carbs only in the morning. And I try not to eat at least two hours before bed.

Usher is amazing. He's perfection to me as a performer. He gets down.