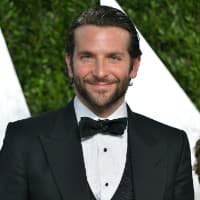 Bradley Charles Cooper (born January 5, 1975) is an American actor and filmmaker. He has been nominated for various awards, including eight Academy Awards and a Tony Award, and has won two Grammy Awards and a BAFTA Award. Cooper appeared on the Forbes Celebrity 100 three times and on Time's list of the 100 most influential people in the world in 2015. His films have grossed $11 billion worldwide and he has placed four times in annual rankings of the world's highest-paid actors.

Cooper enrolled in the MFA program at the Actors Studio in 2000 after beginning his career in 1999 with a guest role in the television series Sex and the City. He made his film debut in the comedy Wet Hot American Summer (2001). He first gained recognition as Will Tippin in the spy-action television show Alias (2001–2006), and achieved minor success with a supporting part in the comedy film Wedding Crashers (2005). His breakthrough role came in 2009 with The Hangover, a critically and commercially successful comedy, which spawned two sequels in 2011 and 2013. Cooper's portrayal of a struggling writer in the thriller Limitless (2011) and a rookie police officer in the crime drama The Place Beyond the Pines (2012) drew praise from critics.

Cooper found greater success with the romantic comedy Silver Linings Playbook (2012), the black comedy American Hustle (2013), and the war biopic American Sniper (2014), which he also produced. For his work in these films, he was nominated for four Academy Awards, becoming the tenth actor to receive an Oscar nomination in three consecutive years. In 2014, he portrayed Joseph Merrick in a Broadway revival of The Elephant Man, garnering a nomination for the Tony Award for Best Actor in a Play, and began voicing Rocket Raccoon in the Marvel Cinematic Universe. In 2018, Cooper produced, wrote, directed and starred in a remake of the musical romance A Star Is Born. He earned three Oscar nominations for the film, as well as a BAFTA Award and two Grammys for his contributions to its U.S. Billboard 200 number one soundtrack and its chart-topping lead single "Shallow". He gained another Academy Award nomination for producing Joker (2019).

Labeled a sex symbol by the media, Cooper was named People's magazine's "Sexiest Man Alive" in 2011. He supports several charities that help fight cancer. Cooper was briefly married to actress Jennifer Esposito, and has a daughter from his relationship with model Irina Shayk.

New YorkI always sort of talk about - to myself at least, or to my friends, about wanting to just keep life very simple. I've found it most simple here in New York. You know, it's basically I have a, in a way, a 9-to-5 job, you know? I do eight shows a week. I live in New York City. I get to walk everywhere, and you know, just be one of the people of the city. And it's actually wonderful.

ConfidenceI liked sports but I never really had the confidence. I was always coordinated and it came easy to me, but I didn't have the confidence to go along with the physical skill.

I think testing films are a great tool. And I think showing them to people that you value their opinion is important, but once you give over to what reviewers think, that's tricky. You don't know what their agenda is; it's so subjective. You have got to make sure you are asking someone's opinion who you know.

I was pretty as a child and I felt that I wasn't very manly and that plagued me for years.

I used to work the graveyard shift.

I definitely am a huge lover of comedy, and it's only through doing so many comedies that I've realised how much of an influence they've been on me.

I loved the college experience of studying.

Being in 'Us Weekly' does not make you famous.

Anything has a rhythm to it, comedy or drama. There has to be a musicality to it. And everybody can't play the same instrument, ideally. But I think that we all have the same comedic tendencies, and that's why it works. We all sort of agree with what's funny.

Some directors have just one way of working; you either have to adhere to it or you don't.

I want to work with great filmmakers and great actors and get better as an actor.

I seriously love to cook ... My grandmother was an amazing cook. As a kid, I used to help her make handmade pasta, cavatelli and ravioli. It was one of my favorite things to do. I love the idea of making whatever is in the fridge into something.

Personally, I've made myself a very small window of what I enjoy in this business, which is I love being a big part of the storytelling process.

I just wrapped this movie called The Wedding Crashers which was a pretty big break for me.

If you're a single man and you happen to be in this business, you're deemed a player. But I don't see myself as a ladies' man.

I've never heard of a comedy that hasn't had reshoots, especially for the ending of a movie in a comedy.

I think he's Will 's partying a lot in Cabo. I think he's running a brothel. I don't know what he's doing.

For a comedy to work, magic has to happen.

I have two beautiful dogs that I cherish.

I've never ridden a hog. I only have sport bikes. But that's basically how I get around L.A. Because traffic is horrendous.

My mother emails me stuff about when she finds a paparazzi photo and theyre like, his hair is out of control.

Women are a source of energy in life. I've always wanted to be in a war or baseball movie, but the thought of having no women on set for six months - that's hell. I don't know if it's animalistic or what, but men become like peacocks with their feathers up when women are around.

If you could change the neural pathways in your brain so that you could recall everything you've ever heard, taste, smelled or touched, basically from the womb on, and use it at your disposal, that's an interesting concept.

I completely fell in love with riding horses. I really didn't want to wear a helmet when I would go off with the trainer on weekends, galloping through forests and stuff. But thank God he made me, because one time, I was going under a tree and my helmet hit a branch. It literally would have taken my head off.

Unfortunately, when someone asks me for a favor, I cant say no. Because of my upbringing - my Catholic guilt - if I dont do it, it plagues me.

I never lived the life of 'Oh, you're so good-looking'. People thought I was a girl when I was little, because I looked like a girl-maybe because my mother would keep my hair really long in a bowl cut. I was in a coffee shop once and the waitress was like, 'What do you want, Miss?' I was 10 or 11-the worst age to have that happen. I had a jean jacket on and a Metallica pin. I thought I was really cool.

I was on Facebook. I'm not anymore, but my sister always sends pictures to a page. I'm sure you can find a Bradley Cooper there.

The only thing I hate are photo shoots. I just hate them. I don't know why I cannot stand them.

Breaking news is a thing that's on TV all day. 10 or 15 years ago, breaking news would get everybody around the table because it was going to be something huge.

There's got to be something you want to tell and that's the engine which spurs all of the work you have to do in order to create the story, but you have to love some sort of nugget of what you're telling to be a filmmaker.

Every performance is completely its own thing.

When we see Christ for who He is He then tells us who we are.

I worked in restaurants the first half of my life.

I don't know if it's animalistic or what, but men become like peacocks with their feathers up when women are around.

I remember being away somewhere, and I had forgotten it was Valentine's Day with a person, and that was very embarrassing.

Life's complicated and people do things for a lot of reasons. I think if you live in a black-and-white world, you're gonna suffer a lot. I used to be like that. But I don't believe that anymore.

You can tell if someone's into you. You can feel the chemistry.

If you look at anything, there are always comedic moments.

Our submission defines our authority

Don't trust a guy who accuses you of infidelity. He's cheating. He's projecting. If you're living that kind of life, you think everybody else is too.

When I'm into a woman, I literally can't stop staring. I'm like a little kid. I become completely entranced.

God opposes the proud. The way you get up front is do really good work in the back. Humility is a by product of spending time with Jesus - it is not a reflection of yourself

Give me an authentic woman, and I'm happy.

I think I'm a decent-looking guy. Sometimes I can look great, and other times I look horrifying.

Life's complicated and people do things for a lot of reasons.

What gets celebrated gets replicated.

I think if you live in a black-and-white world, you're gonna suffer a lot. I used to be like that. But I don't believe that anymore.

You can't really control how people are going to feel about you; all you can really do is be yourself. Because if you seduce somebody, and you seduce them by pretending to be a certain way, once they are seduced they are going to find that you are not that way. And then you have to maintain an image that's not real, so you really screw yourself. The best is to be yourself and hope they like you.

This is what I learned at the hospital. You have to do everything you can, you have to work your hardest, and if you do, if you stay positive, you have a shot at a silver lining.

I grew up in a very old-fashioned Roman Catholic, Italian-Irish family in Philly.