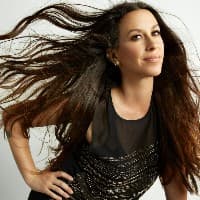 WomanAngerFearWhen someone says that I'm angry it's actually a compliment. I have not always been direct with my anger in my relationships, which is part of why I'd write about it in my songs because I had such fear around expressing anger as a woman.

WomanMenAlpha men are very turned on by the alpha woman, really high chemistry, really fun to work with, probably really fun to have affairs with, but there's not sustainable harmony in that lack of complement. There can only be one person in the driver's seat.

WomanI'm a liability to them - I'm a woman, I'm empowered, I'm an artist. I've had executives who can't come to my shows they're so scared of me. I've been a thorn in many people's sides just by existing.

WomanAnger has been a really big deal for women: how can we express it without feeling that, as the physically weaker sex, we won't get killed. The alpha-woman was burned at the stake and had her head chopped off in days of old.