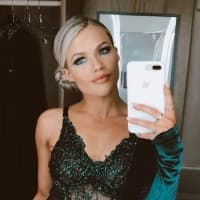 Witney Capri Carson McAllister (née Carson; born October 17, 1993) is an American professional Latin ballroom dancer and choreographer. She first gained attention in 2012, when the 18-year-old finished ladies' second runner-up in season nine of So You Think You Can Dance. Carson continued her professional dancing career in early 2013 as a troupe dancer in seasons 16 and 17 of Dancing with the Stars. She was promoted to professional partner in season 18. In season 19, she and her partner Alfonso Ribeiro were announced the winners on November 25, 2014, making her one of six professional dancers to win the mirror ball trophy within their first two seasons, while Ribeiro waited ten years for him to win. For that season, she received a nomination for the Primetime Emmy Award for Outstanding Choreography. In 2019, she reunited with Ribeiro to co-host the reboot of Catch 21. Throughout her dance career, Carson has worked with dancers and choreographers such as Mia Michaels, Nappytabs, Travis Wall, Sonya Tayeh, Tyce Diorio, Mark Ballas, Derek Hough, and Stacey Tookey.

All quotes by Witney Carson:

No matter size, weight, or age woman should never forget their divine worth. We are powerful, beautiful beings and should be treated as such.

A lot of things inspire me, but I would have to say the main thing that drives me is music.

In 2012, I was diagnosed with melanoma - skin cancer - and had to get surgery on my left foot. I was out for four weeks - no dancing, no walking, nothing! It was horrible, but it taught me patience and to never take for granted the simple things we have.

My family especially has always taught me to be myself and not let other people's opinions change me. To always believe my instincts and follow my heart.

If I hear an amazing piece of music, I can't help but think of ideas, choreography, and everything that comes along with it.

I eat healthy most of the time. Whole foods are the best for you when you are super active, so I get plenty of fruits and veggies to keep me energized.

I love being outdoors, water sports, hiking - really, anything that keeps me moving!

I'm lucky to have so many supportive, inspirational people in my life.