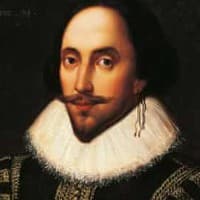 English playwright, the author of The Spanish Tragedy, and one of the most important figures in the development of Elizabethan drama

Thomas Kyd (baptised 6 November 1558; buried 15 August 1594) was an English playwright, the author of The Spanish Tragedy, and one of the most important figures in the development of Elizabethan drama.

Although well known in his own time, Kyd fell into obscurity until 1773 when Thomas Hawkins, an early editor of The Spanish Tragedy, discovered that Kyd was named as its author by Thomas Heywood in his Apologie for Actors (1612). A hundred years later, scholars in Germany and England began to shed light on his life and work, including the controversial finding that he may have been the author of a Hamlet play pre-dating Shakespeare's, which is now known as the Ur-Hamlet.

All quotes by Thomas Kyd:

I'll trust myself, myself shall be my friend.

Where words prevail not, violence prevails.

As I am never better than when I am mad; then methinks I am a brave fellow; then I do wonders: but reason abuseth me, and there's the torment, there's the hell.

Then haste we down to meet thy friends and foes; To place thy friends in ease, the rest in woes. For here though death doth end their misery, I'll there begin their endless tragedy.

In time the savage bull sustains the yoke; In time all haggard hawks will stoop to lure; In time small wedges cleave the hardest oak, In time the flint is pierced with softest shower, And she in time will fall from her disdain, And rue the sufferance of your friendly pain.

Oh eyes, no eyes, but fountains fraught with tears; Oh life, no life, but lively form of death; Oh world, no world, but mass of public wrongs.

Thus must we toil in other men's extremes, That know not how to remedy our own.