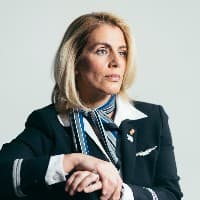 Sara Nelson (born March 11, 1973) is an American union leader who serves as the international president of the Association of Flight Attendants-CWA, AFL-CIO. A United Airlines flight attendant since 1996, she previously served as AFA's international vice president for a term beginning January 1, 2011. AFA-CWA represents nearly 50,000 flight attendants at 20 airlines.

All quotes by Sara Nelson:

Explaining the moment of connection between a reader and book to someone who's never experienced it is like trying to describe sex to a virgin.

Allowing yourself to stop reading a book - at page 25, 50, or even, less frequently, a few chapters from the end - is a rite of passage in a reader's life, the literary equivalent of a bar mitzvah or a communion, the moment at which you look at yourself and announce: Today I am an adult. I can make my own decisions.

Interest in reading memoirs is universal. What has happened is that people are writing about more and more outrageous things. Our threshold for weirdness - you can't have just a normal childhood - has gone way up.