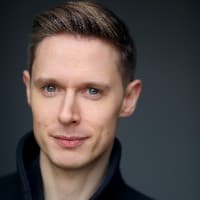 Samuel Barnett (born 25 April 1980) is an English actor. He has performed on stage, film, television and radio, and achieved recognition for his work on the stage and film versions of The History Boys by Alan Bennett. His television performances include roles in the BBC comedy Twenty Twelve and in the Showtime drama Penny Dreadful. He played the lead role of Dirk Gently in Dirk Gently's Holistic Detective Agency, the 2016 BBC America adaptation of the book series by Douglas Adams.

All quotes by Samuel Barnett:

I'm a huge fan of [Elijah Wood] work and a huge fan of him, as a person. What's great about getting to know him is that he's just a really lovely, regular guy.

Elijah Wood is interested in people, in life and in music.

The thing about Dirk [Gently] is that he's very lonely.

I think Dirk [Gently] thinks that he's a brilliant detective, but he's the worst detective, ever. He does have this particular skill, which I suppose you might call a really bad superpower because it's just not very helpful. He is able to sense the connections between things and he's nearly always right, but the problem is that he never knows what to do with any of those messages that he receives from the universe, so he just acts on things and gets himself into terrible trouble, all the time.

Dirk Gently [from Dirk Gently's Holistic Detective Agency], needs a sidekick, as all good detectives do, and he gets this message from the universe that this guy, Todd Brotzman, played by Elijah Wood, is the guy to help him through this mystery. But of course, that doesn't really explain the breadth of it.

Because I'm playing Dirk Gently [ in Dirk Gently's Holistic Detective Agency], I'm so fond of Dirk. I really see Dirk's vulnerability, and you get that, more and more. You'll start to see a little bit more of Dirk's backstory, why he behaves the way he does, and why he's doing what he's doing. I see a lot of his vulnerability, his sensitivity and his insecurity.

One of the joys of this show [Dirk Gently's Holistic Detective Agency] is that each of those characters could be starring in their own show. It's only as the show goes on that you realize how they interconnect. They're all moving towards one another inexorably, to meet at a certain point.

The whole nature of the show [ Dirk Gently's Holistic Detective Agency] is that everything is connected, and everything is interconnected. You have all of these strands with all of these characters, and you watch the characters interact and you wonder, "What do they have to do with each other? How does any of this link?"

I have been out of drama school for 13 years, so there are 13 years worth of graduates behind me.

Max [Landis] writes in quite a heightened way, specifically for Dirk. There's a rhythm and a specific speed to it, and it was very easy to learn because it was so well-written. It just rolled off the tongue. There aren't many auditions that I go for, where I feel like I could actually do the part. But with this one, even though I was not quite sure how to pin Dirk down, I thought I could do it.

I'm a Brit and I just put myself on tape, back in London, for a very distant American project that I thought I didn't stand a chance of getting. And then, I got a call about a week after I had submitted my tape, just saying, "They really like you and want to screen test you." So, I flew to L.A. and did the screen test. And then, I met Elijah [Wood] and did a screen test with him. And then, I had a very nerve-wracking few days back home, waiting and waiting and thinking, "This cannot possibly go my way because that would just be too good to be true." And then, it did.

I read the script [of Dirk Gently's Holistic Detective Agency] and went, "I haven't read anything this good, in a long time." I thought it was absolutely brilliant. The dialogue is so sparkling, smart and witty. You also have these insane, crazy characters, like energy sucking vampires and holistic assassins. It's all completely weird.

The great irony to Dirk [Gently] is that he sees connections in everything, but the one thing he fails and struggles with most is connecting with other people.

We did every scene together, every day for four months, and it could have been a disaster, if we didn't get on, but we clicked straight away. Elijah Wood is just the nicest guy.

[Elijah Wood] is a really fully-rounded, amazing human being, and I feel incredibly lucky, especially given how closely we have to work together.

[Elijah Wood] has got such a broad outlook. It's so much bigger than just the acting industry.

To me, Elijah Wood is one of the best actors of my generation. He's so incredibly present and in the moment, when you're working with him, and then we just chat away about anything off camera because he's a lovely guy.

I couldn't have asked for a better acting partner and a better human being to work with. We have to work very closely together, and I felt, in our screen test, that we had really good chemistry, but I wasn't sure if I was just making that up. Max has written a really finely wrought bromance. I have complete trust in Elijah [Wood].

The great thing about the show [ Dirk Gently's Holistic Detective Agency] is that there is so much more to be revealed. There are questions about what each of these characters actually know, and nothing is what it seems.

You had to make everything much more truthful for the camera. With the stage it's a given that it's going to be theatrical.

I'd seen Elijah [Wood], when I was a little boy, in The Good Son. And then, I was a huge fan of The Lord of the Rings. It took awhile to get over that whole, "That's Elijah Wood - Frodo, from The Lord of the Rings." I was a mega fan of that. I went to the all-day screenings of the director's cut, where you could see the really long versions of all three movies, in one day.

Like the Elizabeth I play, Queen Elizabeth is a monarch who actually moves with the times. She gets new information, assimilates it, and changes in order the fit in with the way the world is moving. I admire that.