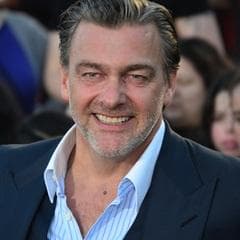 George Raymond Stevenson (born 25 May 1964) is an actor from Northern Ireland. He is known for playing Dagonet in the film King Arthur (2004) and Titus Pullo in the BBC/HBO television series Rome (2005–2007). He has portrayed two Marvel Comics characters: Frank Castle / The Punisher in Punisher: War Zone and The Super Hero Squad Show, and Volstagg in Thor and its sequels Thor: The Dark World and Thor: Ragnarok. In the 2011 film Kill the Irishman, he portrayed mobster Danny Greene. In 2011, he appeared as Porthos in The Three Musketeers and in 2012 he played Ukrainian mobster Isaak Sirko in the seventh season of Dexter. He also portrayed the character Blackbeard in the third and fourth seasons of Black Sails. He voiced Gar Saxon in Star Wars Rebels from 2016 to 2017 and Star Wars: The Clone Wars in 2020. In 2022, Stevenson played the role of Governor Scott Buxton in the Indian blockbuster film RRR (film).

All quotes by Ray Stevenson:

I love the chameleon nature of this business [acting]. I always have. Sometimes I'm not as recognizable as somebody else and I may not have gotten a role, but for me, acting is not a competition. I've just kept my head down and kept working, and had the great pleasure of working with some amazing people and playing some extraordinary and extreme characters.

It's all about the integrity of their characters. They [Marvel] care so much about the loyalty and integrity of each and every character and all of their stories. They trust and love their readership. They're the ones who have invested in these stories.

There's not a lot of direct back story but you do get to see them playing around each other a lot.

Hence the genius of having Ken steer this ship as well. You have to invest these characters with a Shakespearian quality and not in a way that might disengage the audience but in a way that actually lets you play to an audience.

The way Shakespeare wrote Fallstaff is with a heightened language and everything. That's the genuis of having Ken Branagh here as well. Shakespeare doesn't require you to have a doctorate in his language or whatever to understand him. It just has to be directed and played right. It's all about scale and presence and getting these huge, epic stories across.

When you're wearing jeans there's a shift in your center of gravity. A costume like this and a character like this, there's no way to hide. If you try and play him any way sort of modern or normal, you diminish. He's larger than life. He's 150 percent. You've got to go for it all the time. It was just impossible.

I'm Volstag and what you see is what you get. He's a bon vivant lover of life epicurean goodfellow. He's a god, which helps. He's full of life. He reminds me very much of Falstaff. There's a wonderful innocence to him and the steadfast loyalty of a big Saint Bernard dog.

If the project piques my interest and scares me a little bit, then it's got me hooked.

For me, because I've had classical theater training, when people say, "Oh, my god, the play is amazing!," I'll never get to see it because I'm in it.

They're {Marvel] the ones who have went out and bought the comic book whenever it came out. They're the real investors. They serve them. Having a chance to be part of that Marvel Universe is just - well, it is what it is. It's just fantastic.

History is written by victors and, occasionally, sensationalist journalists. I mean that with the best respect.

The pamphlets going back to London telling of the violent derring-dos of the Bahamian pirates were the ones that brought infamy to the names of Charles Vane and Blackbeard. How much of that is really documented history? It carries a flavor with it, but take all this with a pinch of salt.

I consider it an actor going to work with other actors. It's not a competitive sport, it's not to outact anybody else, sorta thing, you can be a bad actor but you don't outact anybody, you just bring your character as best as you can.

When many different voices send you in different directions, you can't listen to your own.

I didn't want people to go out wanting to go tool up against the bad guys (and at impressionable ages). I said, don't shy away from the violence or pull back on this, commit to this.

[Pirates] are a victim of their own success. People have identified with pirates in a comic and caricature sense.

I don't think you see a pirate with a parrot on his shoulder, for example. And even with the accents.

I like bringing little subtle complexities to a character. It's all about the subtext. No one can really describe or fully know another human being, even if they get a hook on them. It's more about instinctively knowing whether you like somebody or not.

As an actor, I relish and delight in doing things that I'm not necessarily the demographic for. This is a demographic that is touching the psyche of a certain age group, facing the real internal questions of people who are going through rites of passage into adulthood. It's earth-shaking stuff.

The weird thing is, in America, people were saying, "You're not going to get recognized because all you're going to see is basically your forehead and eyes."

It really reminds me of the great movies of the 30's and 40's with huge sets and voluminous fireplaces you could walk around in. Glazed floors. I was expecting a Busby Berkley dance number. Big fanfare and all the girls coming out. I'd have joined in. It's got that scale, you know?

You just have to open the newspapers in most Western news to see real violence.

I never thought I would get to have my own action figure.

I don't give a damn if you like Blackbeard. I don't care if you think he is an absolute despot. Do you believe me? If you do, I've done my work.

When you're wearing jeans, there's a shift in your center of gravity.

I wouldn't ever presume to say that I am a comic book fan.

Really Edward Teach, Blackbeard, was actually tall, so he was literally larger than life and so he knew that and actually the more you read about him, you realize that he actually respected and knew about the theatricality and he'd rather take a ship by threatening and having the power of his personality and the threat of the oncoming danger to sway the ship to just acquiesce and just give up their cargo and so none of his crew got hurt and they would just take their bounty and he wouldn't have to kill anybody, but of course he earned that reputation, so he was no saint.

It is a tough business but if you get yourself in a situation like I, you can maintain a career over many years. That, to me, is a successful actor.

Sometimes, I have lost out on a gig because I was not high enough profile.

The way Shakespeare wrote Fallstaff is with a heightened language and everything.

Blackbeard was larger than life. He was 6'4" in 1710. He was a colossus, and like a rock star walking into a bar. He was a tremendous commander, a great leader.

Well, I'm not a natural gym person myself, anyway.

Life itself is pretty funny when you realize how absurd it can be.

Nobody wakes up in the morning thinking, 'I'm a bad guy.' They think they're the right guy.

It does if you put yourself out there being a pirate. It's like if you have an army and your army sit around and not doing anything and living the lives of decadence and they're faced with a battle, and you slide. Do they deserve the right to call themselves an army? Do these pirates who are basically languishing deserve the right to call themselves pirates? They're victims of their own success.

I suppose you just feel on an instinctive level if something is honest.

Humor is a very important thing. It is a natural predilection. It is an emotional release.