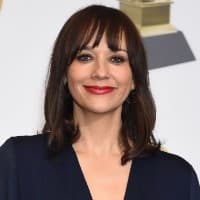 She worked as a producer on the film Hot Girls Wanted (2015) and the series Hot Girls Wanted: Turned On (2017), directing the first episode of the latter. Both works explore the sex industry. In 2018, her documentary Quincy, about her father, Quincy Jones, debuted on Netflix; it won the Grammy Award for Best Music Film in 2019.

All quotes by Rashida Jones:

Everything is about consumerism. If there's money to be made, there will be an audience and people will feel empowered and I truly believe that women haven't fully tapped into their potential as a market.

I've been really lucky with acting, in that I can do things I believe in and feel good about, and feel good about myself. If for some reason one day that ends, I won't do it anymore. If I feel like I have to compromise myself to continue to be in this industry, I don't want to do that.

I have a deep respect for musicians, and I feel like I would want to be so prepared and so well-educated and deep in the process before I ever release anything.

I definitely work pretty hard to stay present and focused. I've also tried to create a life for myself where I'm surrounded by honest, loyal, and funny people, because I like to laugh.

I love broad comedy. It has its place. If I were to do that, I'd love to do physical comedy.

There's a sense of entitlement and isolationism that I think is really dangerous, and the way globalization and technology have been used isn't really for the best.

There's no sense that you can knock on your neighbor's door or be part of a local community group, and that's part of your responsibility as a human being.

I think it's a relatable concept - when you have a long-term relationship or marriage, and you want to try to be friends with that person, because you kind of grew up with that person and they know you better than anyone, and how it's just impossible to make that transition seamlessly.

I think I'm a natural appreciator of comedy. I was definitely not the girl in junior high that all the guys wanted to date. They wanted to date my friends - which was great, because I had to be funny.

I realize my need to be liked or my need for strangers to rate me well, even with their words and their thoughts, I'm not alone in that, and the whole thing is set up culturally so we feel that way.

When I see somebody sun-drenched in a shot with their espadrilles and a cup of coffee, I'm like, "Your life is amazing. It's so perfect." I get drawn into that very easily so it totally worked, because the visual style sucks you in. It makes you want that.

I was a chubby, chubby little tub-tub. At the times when it mattered: twelve, thirteen, and fourteen. I'm so happy I was. If you're beautiful young, you really miss out on developing parts of yourself.

I wish for myself as an adult that I cared less what people thought of me, especially people who don't know me.

I do have designers that I love to wear, like Philip Lim and Marc Jacobs whose stuff I know will look good on my body. But still, I always like to express myself by changing things up.

I think people kind of come in who they are, and it sort of doesn't even matter who their parents are - it can affect you a little bit, and you can be guided and shaped.

I think there is this thing where people are impressed - it gives you a leg up in the sense that people won't treat you like a run-of-the-mill actress. They'll assign "smart" to your word bank, your adjective bank.

When a thing you love faces adversity, you start to feel more protective of it. Also, you take an inventory all the time. You ask yourself, "Is this worth all my fighting?"

There've been times when I have existential conversations with myself, and I've thought about leaving and trying to apply my education better. But ultimately it doesn't really matter. Learning how to write, learning how to write papers and structure, that's been very helpful for writing.

With acting, the stark reality for women is that it's nearly impossible to get older in an elegant fashion as an actress. Either you're fighting your age, or you're having to own it in a way that feels inelegant, or you're Meryl Streep and you're an angel from God.

I probably wouldn't be acting if I didn't grow up in Hollywood.

I'm not easily offended. I have a pretty high tolerance for raunchiness or shock value, so I'm the wrong person to use as a gauge.

If you feel like you can't actually do the right thing and you're headed off into the field of justice, maybe there's no point in going into it.

The justice system is flawed, and that just because you're overtly guilty doesn't actually mean you're actually going to go away, to jail.

I love fashion, but maybe I love it peripherally.

I hate to be a broken record - my parents have a lot to do with that too, because that's how they live their lives.

It's really fun to write cuss words. Just in general.

The minute you feel like there's nothing left to learn, whether it's with your career or life, you're done.

I feel like until you show every side, you're not doing the gender justice.

I have friends who have no choice; they came from whatever town, they didn't have anybody in entertainment and they just knew they wanted to act and they did it.

I like to wear what make me feel great, which can mean the color, or that the fit's right, or that it's just an interesting piece of clothing. I like to change it up.

I did a lot of theater in school. I thought maybe I wanted to go to law school or be a judge or a politician. And then I just kind of got smitten by the process of rehearsal and working with other actors and those kinds of challenges. And then comedy.

I don't really mess with Instagram much, but I get why people love it. Because to me, it's better to tell a story through a picture than 140 characters.

I'm a comedy geek so anything comedy related, whether that's standup shows, improv shows, I'm all over that. That's my favorite way to be entertained always.

As much as my parents are part of Hollywood, I have no recollection of them giving me advice about it.

Sure, being good at your job is really important, but in acting, so much of the decision's already made the minute you walk in the room because they're like, 'His hair's good or she's got the right skin color' or whatever. It's so random, but it's so physically oriented.

Caring about what people think of me decreases everyday.

I'm friends with a lot of my exes, but it took time. We didn't just get into it. I don't think you can be friends until you're cool with them dating someone else. That's when you know.

In early high school years, I was pretty chubby, and I spent a lot of time on my computer, before it was cool to have a computer - because there was a time that was true. So that's where I developed my personality.

People are very nice to me, and they've been nice as my career has gotten better and I've gotten more jobs. But the reality is that if I decided tomorrow that I didn't want to act anymore, it's not like people are going to be like, "Please, come back!"

I love going to weddings.

I want a baby and I want a family, for sure.

Well, I'm not a method actress by any stretch of the imagination so the best thing that I can do is be as real as possible and find whatever commonality in that character that I can see myself.

My mother and I are more than best friends; we are partners in crime. After she and my father, Quincy Jones, separated when I was 10 years old, my sister, Kidada, who was 12, went to live with our dad, and I stayed with my mother.

In high school, I was on the youth advisory council for the Mayor's Office of Los Angeles, and that was kind of my first experience in the bureaucratic system. We tried to get things done, and nobody was really interested in getting anything done.

I have a lot of girl friends who are very adept at making friends, and guys are just not.

There's a definite responsibility that comes with being famous. You shouldn't be able to just dress up and look pretty.

I think you make mistakes, especially in your twenties, where you date guys you wouldn't even be friends with - ever.

I really like the relaxed glamour of the 70s.

I love being part of an ensemble.

I know what it's like to have my heart broken. It is not adorable.

Comedy is like music, and the way to make the best music is to have skilled musicians in your band.

Auditioning is the worst.

Ads featuring real women and real beauty are such a necessary component to offset the potentially dangerous programming out there for little girls.

I think part of being an adult is leaving the fairytale behind.

Just because a situation is grim doesn't mean you don't have every right to smile.

Chemotherapy is brutal. The goal is pretty much to kill everything in your body without killing you.

I think every girl has that a guy she has trouble letting go of.

My parents are the coolest of the cool on every single level, and it's because they have a deep appreciation for every moment of their lives.

I had a nickname in junior high, and I'm loathe to say this: 'potato lady.'

I think there's just an inherent burden of being alive and being a woman. No man would ever admit that, but I think women know it, which is: You know more than men, you know more than most people you're dealing with every day, and you know that's it up to you to make things move forward, and you get paid half as much, but you just do it.

I remember being a kid and seeing the 'National Inquirer' at the grocery store checkout line. When somebody actually picked up a copy, it was mortifying. You felt dirty for them. But now it's perfectly acceptable to read something like that. There's absolutely no taboo surrounding that kind of exploitation.

I know my mom said as early as she can remember letting me watch TV, my one treat a week when I was like 6 was to stay up and watch 'Saturday Night Live.'

I have to say, you know, I've seen so many people go through the cycle and become famous and not famous anymore and, you know, want - have their priorities change and want different things.

You know, I definitely have an inclination to work in the public sector.

People still go to Comic-Con because they love comics.

My activities tend to revolve around crossword puzzles, reading and playing piano and games with my friends.

Music is hugely important to me.

Mom is the most unconditionally loving person I will ever know, and she has always supported me on every level.

It's very challenging to learn something new as an adult.