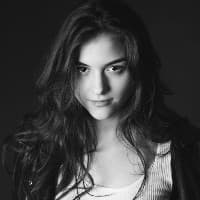 Quinn Shephard (born February 28, 1995) is an American actress, film director, producer, screenwriter and film editor. She is best known for her roles as Donna Malone in the Christmas comedy Unaccompanied Minors and as Morgan Sanders in the television series Hostages. In 2017, her feature film directorial debut, Blame (which she also wrote, produced, edited, and starred in), screened at several film festivals and earned critical attention.

All quotes by Quinn Shephard:

I think coming off of "Blame", I've been talking a lot about directing. It's something that I really love and connect with. I truly consider it what I was born to do. That kind of loops in with filmmaking on the whole, because when you create something, you're also wearing a lot more hats than just director. At the same time, I also think acting is something that's very powerful in my life.

I love music. I think music is a big inspiration; I listen to it a lot when I'm writing. I really love cinematic music. A lot of the time, I make playlists for my characters when I act. I also make playlists for the scripts that I write.