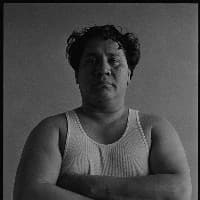 Oscar "Zeta" Acosta Fierro (April 8, 1935 – disappeared 1974) was a Mexican-American attorney, politician, novelist and activist in the Chicano Movement. He was most well known for his novels Autobiography of a Brown Buffalo (1972) and The Revolt of the Cockroach People (1973), and for his friendship with American author Hunter S. Thompson. Thompson characterized him as a heavyweight Samoan attorney, Dr. Gonzo, in his 1971 novel Fear and Loathing in Las Vegas. Acosta disappeared in 1974 during a trip in Mexico and is presumed dead.

All quotes by Oscar Zeta Acosta:

I heard the opening bar of 'Help' as I headed down Polk Street. Every single time I've heard that tune I've taken it as some message from God, a warning of things to come, a perfect description of my mashed-potato character

And the truth of the matter is that death is a mystery to me. I have no opinion on the subject.