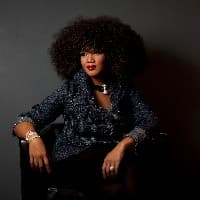 Measha Brueggergosman (June 28, 1977) is a Canadian soprano who performs both as an opera singer and concert artist. She has performed internationally and won numerous awards. Her recordings of both classical and popular music have also received awards

ArtI don't need to live my art and almost die to understand my heroines. I want to love my sons, live quietly, eat good food, have meaningful friendships in and out of work and have a very large wine collection.

It's easy to ignore the mess around election do that over here in Germany. It's just a blip on the radar for the German culture. They're like, "Y'all are crazy over there. Next segment." I'm not saying they're not scared. They're just wondering when people are going to wake up and see the pattern they themselves lived through and could see coming from a much greater distance. They don't have the hubris of youth to luxuriate in. According to the Germans I've spoken with, Trump's rise looks very similar to what happened prior to Hitler rising to power.

Opera contains music that reflects a culture of poetry and aesthetic. Spirituals are no different. What separates a spiritual for me is that I also happen to love Jesus. When I'm approaching these songs, I'm not approaching them like Mozart. I see my faith and the struggle of my ancestors and of a people seeking freedom beside what these songs are going to be in terms of their arrangement and delivery.

People feel that you'll never be able to recreate the birthplace of a song that has, at its core, the hardship of a people. Unless you underwent the respect that it takes to appropriate those songs through a ritual, then perhaps you should think twice before simply picking them up.

I read nothing. I watch nothing. I haven't even seen myself in the opening ceremonies of the Vancouver Olympics. I don't look back. I don't allow myself to be influenced by people who don't know me. I'm incredibly thin-skinned. When you wander through this life as an exposed nerve, you have to make sure you remain insulated to a certain extent.

I pray to be the best thing ever but I also pray that for my colleagues. You're only as good as the person who can distract from what's meant to be happening.

People are fooled by the colour of my skin. I grew up on the north side of Fredericton in a Celtic culture with an Acadian choir. Don't let the black fool you. I'm actually quite white. When people give me permission to do anything, I simply say, "I would have taken it anyway, but I appreciate you thinking I care what you think." I don't do it with a sense of belligerence. I really do mean well.

Sometimes we depersonalize people who we don't agree with or who we see as targets for hatred. If you think of anything as having a mother, that's going to change everything. All of us have mothers and came from a womb. Buddha says you can't hate anything you understand.

It is particularly challenging looking how I look, but I think of my beautiful, swirled-up babies and I think, "You know what? I will be an example for you." I believe you can set the tone for any room or any conversation by being the first one to lead with love.

The idea of the nightclub and gospel house music is interesting to me; I can't wait to hit that circuit! The Bible says, "Where two or more are gathered in my name, there am I also." When you sing, dance, or open yourself up to being fed by a performer or edified in the experience, there is this possibility that you're going to leave better than you got there.

I can't speak to being a force for change, but I take it and wear it proudly. I'll never deny it or be one of those people who are like, "I'm just trying to do my best..." No! I'm all about total world domination.

I truly believe —particularly in this political climate—I have to make my contribution a hopeful one. I can’t see the world any other way. To whom much is given, much is expected. You can’t come to me and expect that I’m going to be giving up on people, or on our society.

Often the most specific stories end up being the most universal.

I've always hid behind the music despite the fact that I have a huge personality. I'm thrilled that the music is bigger than me and will outlive and outlast me. It frees me up to take risks.