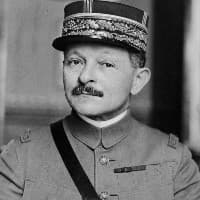 Born in Belgium, Weygand was raised in France and educated at the Saint-Cyr military academy in Paris. After graduating in 1887, he went on to become an instructor at the Cavalry School at Saumur. During World War I, Weygand served as a staff officer to General (later Marshal) Ferdinand Foch. He then served as an advisor to Poland in the Polish–Soviet War and later High Commissioner of the Levant. In 1931, Weygand was appointed Chief of Staff of the French Army, a position he served until his retirement in 1935 at the age of 68.

In May 1940, Weygand was recalled for active duty and assumed command of the French Army during the German invasion. Following a series of military setbacks, Weygand advised armistice and France subsequently capitulated. He joined Philippe Pétain's Vichy regime as Minister for Defence and served until September 1940, when he was appointed Delegate-General in French North Africa. Weygand favoured only limited collaboration with Germany and was dismissed from his post in November 1941 on Hitler's demand. Following the Allied invasion of North Africa in November 1942, Weygand was arrested by the Germans and imprisoned at Itter Castle in Austria until May 1945. After returning to France, he was held as a collaborator at the Val-de-Grâce but was released in 1946 and cleared of charges in 1948. He died in January 1965 in Paris at the age of 98.

All quotes by Maxime Weygand:

There is nothing preventing the enemy reaching Paris. We were fighting on our last line and it has been breached. I am helpless, I cannot intervene.

In three weeks Britain will have her neck wrung like a chicken.