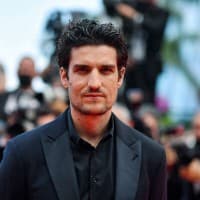 Louis Garrel (born 14 June 1983) is a French actor and filmmaker. He is best known for his starring role in The Dreamers, directed by Bernardo Bertolucci. He has regularly appeared in films by French director Christophe Honoré, including Ma Mère, Dans Paris, Love Songs, The Beautiful Person and Making Plans for Lena. He has also been in films directed by his father, Philippe Garrel, including Regular Lovers, Frontier of the Dawn, A Burning Hot Summer, and Jealousy.

Garrel has also performed in two feature films that were written and directed by him: Les Deux Amis, starring Golshifteh Farahani and Vincent Macaigne; and A Faithful Man, starring Laetitia Casta and Lily-Rose Depp.

He usually plays similar characters such as men in the middle of love triangles or important historical figures such as Jacques de Bascher in Saint Laurent, Jean-Luc Godard in Le Redoutable, and Alfred Dreyfus in An Officer and a Spy. His performances have received many nominations at the César Awards. He is also known for working with different female directors such as Valeria Bruni Tedeschi, Brigitte Sy, Maïwenn, and Nicole Garcia. In 2019, Garrel performed his first English-speaking role by playing Friedrich Bhaer in the film, Little Women.

MarriageParisPeople always go to Paris for their honeymoon. It's like they think because the distances are closer, it's much warmer.

ParisParis, though it's a very famous city, it's very small, so people always tell themselves, "We're gonna love each other in Paris."

LoveParisThere's something about Paris, people just don't have anything else do there but love each other.

In France, I would like to worth with Patrice Chereau, who made Queen Margot.

I hope each day to have done 10 seconds of good work that they can use in the film. And Im always afraid I didnt get those 10 seconds.

I think that what people abroad want from French film, inside French film becomes our worst fear, "Oh, another film about love!"

As an actor I've played a lot of gloomy, romantic leads and even though I might not want to recognize it, I actually really have a sense of humor.

I think the moment I discovered I definitely wanted to act was when I saw a play alone by myself when I was fourteen. Maybe it was a Moliere play? I discovered the atmosphere of the theater, and I knew I wanted to be an actor.

I'm sure you can even find ménage à trois in medieval tales.

There's a fashion, or maybe you could call it a necessity, in French cinema to make social films, which is to say films in which the characters are defined by their social context.

At the end of the day you do have to write a short novel beforehand, called a script, before you can make a movie.

I tried to make a list of films where there's two men and one woman and I realized there's films like this everywhere.

I wanted to be a lawyer. I love that job; I dont know why.

Since I knew I was going to make a film that was purely about emotions, and I knew that I ran the risk of being accused of amnesia relating to the social film, to prevent this I decided it would be good to have characters who were on the margins of society. These are characters for whom love is really the only way to know that they're alive.

I knew that the principle objective of my film was to be a sentimental or an emotional study. What I did was kind of like subterfuge.

Im interested in existential films: I love movies that console you in the same way that a person consoles a weeping child.

Sometimes living is not so light and easy and you need a representation of life in front of you. It's a fake reorganization of reality. You start to feel, "I'm not so alone in the world because I can recognize exactly the same feelings."