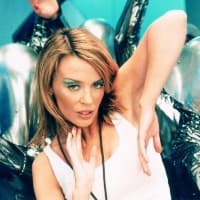 Kylie Ann Minogue AO, OBE (born 28 May 1968), also known mononymously as Kylie, is an Australian singer and actress. Minogue is the highest-selling female Australian artist of all time, having sold over 80 million records worldwide. She has been recognised for reinventing herself in music and fashion, for which she is referred to by the European press as the "Princess of Pop" and a style icon. Her accolades include a Grammy Award, three Brit Awards and 17 ARIA Music Awards.

Born and raised in Melbourne, Minogue first achieved recognition starring in the Australian soap opera Neighbours, playing tomboy mechanic Charlene Robinson. She gained prominence as a recording artist in the late 1980s and released four bubblegum and dance-pop-influenced studio albums produced by Stock Aitken Waterman. By the early 1990s, she had amassed several top ten singles in the UK and Australia, including "I Should Be So Lucky", "The Loco-Motion", "Hand on Your Heart", and "Better the Devil You Know". Taking more creative control over her music, Minogue signed with Deconstruction Records in 1993 and released Kylie Minogue (1994) and Impossible Princess (1997), both of which received positive reviews. She returned to mainstream dance-oriented music with 2000's Light Years, including the number-one hits "Spinning Around" and "On a Night Like This". The follow-up, Fever (2001), was an international breakthrough for Minogue, becoming her best-selling album to date. Two of its singles, "Love at First Sight" and "In Your Eyes", became hits, but its lead single, "Can't Get You Out of My Head" became one of the most successful singles of the 2000s, selling over five million units.

Minogue continued reinventing her image and experimenting with a range of genres on her subsequent albums, which spawned successful singles such as "Slow", "2 Hearts", "All the Lovers", "Santa Baby", "Timebomb" and "Dancing". With her 2020 album Disco, she became the first female artist to have a chart-topping album in the UK for five consecutive decades. Minogue made her film debut in The Delinquents (1989) and portrayed Cammy in Street Fighter (1994). She has also appeared in the films Moulin Rouge! (2001), Jack & Diane, Holy Motors (2012) and San Andreas (2015). In 2014, she appeared as a judge on the third series of The Voice UK and The Voice Australia. Her other ventures include product endorsements, children's books, fashion, and charitable work.

Minogue was appointed an Officer of the Order of the British Empire in the 2008 New Year Honours for services to music. She was appointed by the French government as a Chevalier (knight) of the Ordre des Arts et des Lettres for her contribution to the enrichment of French culture. In 2005, while Minogue was on tour, she was diagnosed with breast cancer. She was awarded an honorary Doctor of Health Science (D.H.Sc.) degree by Anglia Ruskin University in 2011 for her work in raising awareness for breast cancer. At the 2011 ARIA Music Awards, she was inducted by the Australian Recording Industry Association into the ARIA Hall of Fame. She was appointed Officer of the Order of Australia (AO) in the 2019 Australia Day Honours.

MusicMindI love to have a bath with beautiful, relaxing music on and have no rush to do anything. It's a wonderful indulgence, and it helps me to calm down and stop my mind running overtime.

SummerThis is such a special summer holiday for me. I haven't known myself so relaxed in years.

I'm a very proud Australian, always bragging about our country wherever I am in the world.

I walk into the studio and we're all so happy to see each other.

I am in love with my La Cornue custom-made stove - it's a dream to use and my favourite part of the kitchen.

I wrote lyrics that were intensely personal to me a few years ago. Maybe people know me better now.

I do quite naughty things now. I do like to be a bit sexy.

I just want to do everything. I don't want to sound soppy or too cliched, but that's the way it is.

If I came across a role that is completely mainstream and commercial, but it's the right one, I'd jump at the chance.

I know there will be X amount of women being diagnosed. I love to say, You can get through it. You can.

I maintain that the best song is the one that ends up on the album. So whether I've written it or I haven't, I'm very comfortable with both.

I get the lyrics of a tune and interpret them my way.

A few years ago my goal was to try and get the goddamned album made, which put me in a real bad frame of mind.

When you work in TV, it's such a group effort, it's not about you.

I think I'm being friendly with someone and I'll sit in their lap. They think I'm flirting with them.

I'm not sure that I'll be able to do everything that I did before.

The moment my doctor told me, I went silent. My mum and dad were with me, then we all went to pieces. I was saying, No, I've got my flight to Sydney in two hours. I'm getting on a plane.

I've been accustomed to being famous and having a certain level of attention for 14 years, but in the last few months, it's changed. It's like on the arcade game, I've gone up to the next level.

I have never been unfaithful to a partner and would find it immoral to be involved with a married man.

With one man, there was a freedom and liberation. That was with Michael Hutchence, my partner in life

Part of me is a sexual exhibitionist.

One important thing to know is you're still the same person during it. I'm more eager than ever to do what I did. I want to do everything.

I feel more inspired than ever, and think that I will finally achieve what I have long been wishing for: a balance of work and privacy - a harmony.

My life has always been geared towards my career. If my life is complete in other ways then I don't mind being a 65-year-old spinster. But I don't discount love when I'm talking about not getting married. I could... it's just something I haven't wanted to do yet.

Everyone knows how much Australia means to me. I try to get back here as much as I can, but normally it's for work, so I'm in and out and jetlagged and stressed.

I've fancied other women, but I haven't done anything about it.

If you're part of a record company, you're a manufactured product. It doesn't mean that you're not talented.

I can understand why people would want to stay on the road because you create your own bubble. You almost don't live in the real world. Just to have the things that are with you is fine.

I did very much enjoy being part of an independent film. It was just the energy.

My gay audience has been with me from the beginning.

I've had a lot of tragic hairdos and outfits.

I do dance music, and I can be pretty camp myself from time to time.

You get such a kick and then it's all over. That's good ground for uncertainty and depression. I usually burst into tears.

The reason that gets me is, and the greatest part of my job and what I do, is the humanity of it and there's certain moments where that really cuts through.

I am mindful of achieving the right balance in my life and am working hard on that also. To enjoy the little moments of goodness when they appear, to be present with the people I love and to spread light wherever possible.

If I stopped making records or performing, I'd probably still be famous for a while being me. But I'd rather have something to show for myself.

I'm like an eight year old with the dressing-up box. I have the luxury of being able to change on a whim.

I feel reinvigorated, having fresh energy and fresh ideas, and merging that with the history I have.

I used to be able to do the Chinese splits, where you open your legs sideways.

I've always been a little shy about taking my clothes off, but I don't worry about it any more.

Normally my problem is that I'm too inquisitive and want to do everything.

I could see myself as a glitter-hippie.

The Sun in London ran a front page declaring my bum a national treasure. I really did laugh at that. Its not like it can actually do anything, except wiggle.

Glasses are not only functional but can be a great way to express yourself and to change your look. As frames around your eyes, glasses are perhaps one of the most important aspects of how you style yourself.

I never say never about a lot of things. Whatever you want, then more power to you. If someone feels they have to live up to a certain image, then I can kind of understand that pressure because I'm considered to be one of those images, and I know how unreal they are.

I certainly wished I hadn't stressed quite as much or had such insecurity at times. I wish I had trusted my instincts on some occasions when I didn't and I wish I had listened to better advice when I didn't. But overall, I have to look at the glass as half full and acknowledge that I am all of the moments of my life, the good and the not so good.

I have had a holiday, and I'd like to take it up professionally.

I've tried Botox, I've tried them all. I'm definitely not one of those people who says, 'You shouldn't do this.' Everyone can individually do what they want. For all time women have wanted to, for the most part, look their best. It's just that what we have available to us today is what it is today and if you want to take advantage of it, yeah.

Hindsight is illuminating but not always what we want to see.

You need a lot of luck to find people with whom you want to spend the rest of your life. Some people manage to find their soul mate. Others don't. I think love is like a lottery.

Life is about love and experience and learning and evolving and I am richer and thankful for all of the experiences in my life.

Having had cancer, one important thing to know is you're still the same person at the end. You're stripped down to near zero. But most people come out the other end feeling more like themselves than ever before.

I'm trying to be myself more and more. The more confidence you have in yourself... the more you realize that this is you, and life isn't long. So get on with it!

Gay icons usually have some tragedy in their lives, but I've only had tragic haircuts and outfits.

My current motto is to go for it, whatever it is that inspires you.

I'm just a natural flirt, but I don't see it in a sexual way. A lot of the time I'm like an overexcited puppy.