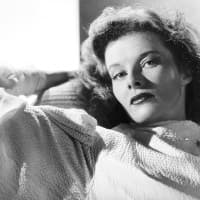 Katharine Houghton Hepburn (May 12, 1907 – June 29, 2003) was an American actress of film, stage and television. Hepburn's career as a Hollywood leading lady spanned over 60 years. She was known for her headstrong independence, spirited personality and outspokenness, cultivating a screen persona that matched this public image, and regularly playing strong-willed, sophisticated women. Her work was in a range of genres, from screwball comedy to literary drama, and she received four Academy Awards for Best Actress—a record for any performer. In 1999, Hepburn was named the greatest female star of classic Hollywood cinema by the American Film Institute.

Raised in Connecticut by wealthy, progressive parents, Hepburn began to act while at Bryn Mawr College. Favorable reviews of her work on Broadway brought her to the attention of Hollywood. Her early years in film brought her international fame, including an Academy Award for Best Actress for her third picture, Morning Glory (1933), but this was followed by a series of commercial failures culminating in the critically lauded box office failure Bringing Up Baby (1938), which co-starred Cary Grant. Hepburn masterminded her own comeback, buying out her contract with RKO Radio Pictures and acquiring the film rights to The Philadelphia Story, which she sold on the condition that she be the star. That comedy film, which also starred Grant and James Stewart, was a box office success and landed her a third Academy Award nomination. In the 1940s, she was contracted to Metro-Goldwyn-Mayer, where her career focused on an alliance with Spencer Tracy, which spanned 26 years and nine movies and extended to an unacknowledged off-screen affair.

Hepburn challenged herself in the latter half of her life, as she tackled Shakespearean stage productions and a range of literary roles. She found a niche playing middle-aged spinsters, such as in The African Queen (1951), opposite Humphrey Bogart, a persona the public embraced. Hepburn earned three more Oscars for her work in Guess Who's Coming to Dinner (1967), The Lion in Winter (1968), and On Golden Pond (1981). Henry Fonda won his only Oscar for Best Actor working with Hepburn in On Golden Pond as did Stewart in The Philadelphia Story and Bogart in The African Queen. In the 1970s, she began appearing in television films, which later became her focus. She made her final screen appearance at the age of 87. After a period of inactivity and ill health, Hepburn died in 2003 at the age of 96.

Hepburn shunned the Hollywood publicity machine and refused to conform to society's expectations of women, even wearing trousers before they were fashionable for women. She was briefly married as a young woman but thereafter lived independently. With her unconventional lifestyle and the independent characters she brought to the screen, Hepburn epitomized the "modern woman" in the 20th-century United States, and is remembered as an important cultural figure.

MarriagePassionMarriage is a series of desperate arguments people feel passionately about.

HappinessThe notion that work is a burden is a terrible mistake. Working and facing up to one's responsibilities: That's happiness.

MindIt would be a terrific innovation if you could get your mind to stretch a little further than the next wisecrack.

FearEveryone thought I was bold and fearless and even arrogant, but inside I was always quaking.

FearI don't fear death, it must be like a long sleep.

FreedomFearI was brought up by two extremely intelligent people who gave me the greatest gift that man can give anyone, and that is freedom from fear.

MarriageI don't give a damn about marriage. But I do care about honor.

MarriageI don't believe in marriage. It's bloody impractical. 'To love, honor, and obey.' If it weren't, you wouldn't have to sign a contract.

When I started out, I didn't have any desire to be an actress or to learn how to act. I just wanted to be famous.

I always wanted to be a movie actress. I thought it was very romantic. And it was.

In some ways I've lived my life like a man, made my own decisions, etc. I've been as terrified as the next person, but you've got to keep going.

I welcome death. In death there are no interviews!

I would have made a terrible parent. The first time my child didn't do what I wanted, I'd kill him.

You sell yourself. The part that I sell is the creature. The adorable part.

You never feel that you have fame. It's always in back of you.

I think the reason that very few people really fall in love with anyone is that they're not willing to pay the price.

Death will be a great relief. No more interviews.

I won't go to a restaurant to eat with friends, always join them afterwards for coffee. In company I always get over enthusiastic, and this leads to indigestion.

If it interests you, they don't have to pay you. It's a fascinating business anyway-it's very nice to be paid-but when you do thrilling material, it's like buying a piece of furniture that's really good.

I remember as a child going around with "Votes For Women" balloons. I learnt early what it is to be snubbed for a good cause.

People have grown fond of me, like some old building.

My father, a surgeon and urologist, studied sex professionally all his life. Before he died at 82, he told me he hadn't come to any conclusions about it at all.

When a man says he likes a woman in a skirt, I tell him to try one.

I can't say I believe in prizes. I was a whiz in the three-legged race - that's something you CAN win.

If you have fame, you never feel that you have fame, if you have the brains of a flea. Because fame is something that's over back of you. It ain't ahead.... Not ahead at all. I mean, if you've done it that's great, but "what are you going to do now?" is the only thing that matters.

I can remember walking as a child. It was not customary to say you were fatigued. It was customary to complete the goal of the expedition.

It's a new low for actresses when you have to wonder what is between her ears instead of her legs.

Afraid of death? Not at all. Be a great relief. Then I wouldn't have to talk to you.

I have loved and been in love. There's a big difference.

The lack of work destroys people.

The calla lilies are in bloom again.

Only the really plain people know about love - the very fascinating ones try so hard to create an impression that they soon exhaust their talents.

It is the ordinary woman who knows something about love; the gorgeous ones are too busy being gorgeous.

Man who stands on toilet, gets high on pot!

If you lead a public life, people are much more on to you than you think.

Two of an actress's greatest assets are love and pain. A great actress, even a good actress, must have plenty of both in her life.

Acting is the most minor of gifts. After all, Shirley Temple could do it when she was four.

Just write the best you can about the things that concern you most. I never lose sight of the fact that just being is fun.

Life is full of censorship. I cant spit in your eye.

How wonderful are the women and men in the world who feed us. Especially those who feed us with no salary. The mothers—I thought. The wives.

Who is Katharine Hepburn? It took me a long time to create that creature.

I find a woman's point of view much grander and finer than a man's.

It's a business you go into because your an egocentric. It's a very embarrassing profession.

I thought, can you think of any really good reason not to do it? Except that, oh, I'm so shy, or oh, my private life, or oh, are they going to find out how boring I am? You know? And that was the only reason now, in a sense, not to do television. Because it certainly is a method of expression, which has to be accepted as these things come along.

Its a force of life, sex; you cant deny the thrill of riding high, wide and handsome with someone you love.

The shakes stop if you drink enough, but then so does everything else.

I have had twenty years of perfect companionship with a man among men. He is a rock and a protection. I have never regretted it.

To be loved is very demoralizing

Children need boundaries, so they can know how far they have to go to get beyond them.

Acting is the perfect idiot's profession.

Our Constitution was not intended to be used by ... any group to foist its personal religious beliefs on the rest of us.

I was born lucky, and I have lived lucky. What I had was used. What I still have is being used. Lucky.

I don't think that work ever really destroyed anybody. I think that lack of work destroys them a hell of a lot more.

What acting means is that you've got to get out of your own skin.

I think all good actors are personalities. If they're not, they're not stars. What makes you a star is horsepower.

I've always thought men and women are not too well suited to each other. It's inevitable that they should come together, but, again, how well suited are they to live together in the same house?

The calla lilies are in bloom again. Such a strange flower—suitable to any occasion. I carried them on my wedding day, and now I place them here in memory of something that has died.

Time is the stuff of which life is made.

A sharp knife cuts the quickest and hurts the least.

The terrible thing about acting in the theater is that you have to do it at night.

Only when a woman decides not to have children, can a woman live like a man. That's what I've done.

Plain women know more about men than beautiful women do.