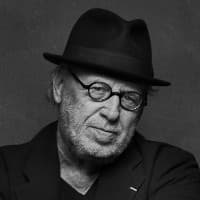 Joseph Kosuth (born January 31, 1945), an American conceptual artist, lives in New York and London, after having resided in various cities in Europe, including Ghent and Rome.

All quotes by Joseph Kosuth:

Seeing is not as simple as looking.

I am only describing language, not explaining anything.

All art (after Duchamp) is conceptual (in nature) because art only exists conceptually.

I liked that the work itself was something other than simply what you saw It meant you could have an art work which was that idea of an art work, and its formal components weren't important.

Forget your ideas about art. Make a shopping list of everything you like about what you've done. Include qualities that you've seen in your life, in the world, and possibly in art that you like. Take this list and make a work that satisfies all of the things on your list without caring if it looks like art.

Change art to include yourself.

That celebrated marriage of science and art, photography, seemed at the time to join together how we look at the world, art, with how we were coming to know it, science.

Making something new to look at is a futile and empty act if its only audience is the eyes.

Unlike the marks of a painting, the photo seems to organize its 'opinions' in relation to the world; even when the photographs have clearly been manipulated, the 'opinions' seem to have all the more force, with the suggested 'participation of the world' articulating that 'opinion' as a difference.

Photography, as an invention, was both art and science. The view it gave us of the world was in some measure acceptable because it was a product of our vision of the world; and it did so as part of the same process which seemed to impart 'truth': science.