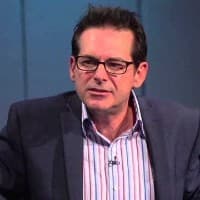 James Patrick Anthony Dore (born July 26, 1965) is an American comedian, political commentator, and YouTube personality. He is the host of The Jimmy Dore Show, a comedy talk show on YouTube where he interviews guests of a political, economic, or scientific nature. Dore's material is often presented in a satirical way that involves sketch comedy routines, which are known for their criticisms of the Democratic Party.

Dore started as a comedian in Illinois in 1989 and made several appearances on late-night comedy shows early in his comedy career. From 2005 onward, his performances increasingly included his own political commentary. A self-described progressive, Dore was affiliated with The Young Turks from 2009 to 2019, where he first produced his program The Jimmy Dore Show, and appeared on a Young Turks Network show titled Aggressive Progressives.

All quotes by Jimmy Dore:

I would be a vegetarian if the food was better.

I am not the sharpest knife in the knife-thing

Turn off the AM Radio and get invited to your own life.