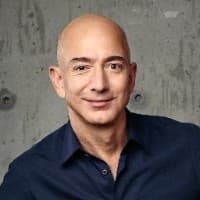 Jeffrey Preston Bezos (born January 12, 1964) is an American entrepreneur, media proprietor, investor, computer engineer, and commercial astronaut. He is the founder and executive chairman of Amazon, where he previously served as the president and CEO. With a net worth of around US$196 billion as of January 2022, Bezos is the second-wealthiest person in the world according to Bloomberg's Billionaires Index and third-wealthiest person according to Forbes.

Born in Albuquerque and raised in Houston and Miami, Bezos graduated from Princeton University in 1986. He holds a degree in electrical engineering and computer science. He worked on Wall Street in a variety of related fields from 1986 to early 1994. Bezos founded Amazon in late 1994, on a cross-country road trip from New York City to Seattle. The company began as an online bookstore and has since expanded to a wide variety of other e-commerce products and services, including video and audio streaming, cloud computing, and artificial intelligence. It is currently the world's largest online sales company, the largest Internet company by revenue, and the world's largest provider of virtual assistants and cloud infrastructure services through its Amazon Web Services branch.

The first centibillionaire on the Forbes wealth index, Bezos was named the "richest man in modern history" after his net worth increased to $150 billion in July 2018. In August 2020, according to Forbes, he had a net worth exceeding $200 billion. In 2020 during the COVID-19 pandemic, his wealth grew by approximately $24 billion. On July 5, 2021, Bezos stepped down as the CEO of Amazon and transitioned into the role of executive chairman; Andy Jassy, the chief of Amazon's cloud computing division, replaced Bezos as the CEO of Amazon. On July 20, 2021, he flew to space alongside his brother Mark. The suborbital flight lasted over 10 minutes, reaching a peak altitude of 66.5 miles (107.0 km).

MotivationPassionDo something you're very passionate about, and don't try to chase what is kind of the "hot passion" of the day.

PassionOne of the huge mistakes people make is that they try to force an interest on themselves. You don't choose your passions; your passions choose you.

HappinessRead the Declaration of Independence to your children as a tradition every Fourth of July. Make sure they understand why the word "pursuit" precedes the word "happiness."

No, communication is terrible!

I believe you have to be willing to be misunderstood if you're going to innovate.

I'm skeptical that the novel will be "re­invented." If you start thinking about a medical textbook or something, then, yes, I think that's ripe for reinvention. You can imagine animations of a beating heart. But I think the novel will thrive in its current form. That doesn't mean that there won't be new narrative inventions as well. But I don't think they'll displace the novel.

Ebooks had to happen.

Amazon Pages and Amazon Upgrade leverage Amazon's existing 'Search Inside the Book' technology to give customers unusual flexibility in how they buy and read books, .. In collaboration with our publishing partners, we're working hard to make the world's books instantly accessible anytime and anywhere.

I think there are going to be a bunch of tablet-like devices. It's really a different product category.

... if it's not your style to stretch and go the extra mile to make sure our customer experience is great, you're going to have an allergic reaction to this company. You probably won't stay. If you do try and stay, but can't adapt to the culture then it will reject you like a virus from a healthy immune system.

I definitely believe people should pay for copyrighted works. And the laws are sufficient: They already require you to pay for copyright work. There's no confusion. The problem is...it's a heck of a lot easier to steal MP3s than to buy them.

There are a whole bunch of people who don't like to shop. But there are also people, maybe, who even do like to shop but are very time pressured. And so shopping online can save people time.

Cultures aren’t so much planned as they evolve from that early set of people.

We expect all our businesses to have a positive impact on our top and bottom lines ... Profitability is very important to us or we wouldn't be in this business.

On the Internet, companies are scale businesses, characterized by high fixed costs and relatively low variable costs. You can be two sizes: You can be big, or you can be small. It's very hard to be medium. A lot of medium-sized companies had the financing rug pulled out from under them before they could get big.

Our vision is every book ever printed in any language [fetched and viewable on our eBook Kindle device] in under 60 seconds.

Good ideas will always get funded, so that's not going to be a problem. But you will see that it will be harder and harder for bad ideas to get funded.

For many people, extended reading sessions on an LCD display cause eyestrain.

There's so much stuff that has yet to be invented. There's so much new that's going to happen. People don't have any idea yet how impactful the internet is going to be and that this is still Day 1 in such a big way.

I love my life. I love being an inventor.

Mediocre theoretical physicists make no progress. They spend all their time understanding other people's progress.

We're working to lower the cost of spaceflight so that many people can afford to go and so that we humans can better continue exploring the solar system. Accomplishing this mission will take time, and we're working on it methodically.

But there's still so much you can do with technology to improve the customer experience. And that's the sense in which I believe it's still Day One, and that it's early in the day. If anything, the rate of change is accelerating.

I think that, ah, I'm a very goofy sort of person in many ways.

I wouldn't be surprised if history records Tim Berners-Lee as the second Gutenberg.

It is very difficult to get people to focus on the most important things when you're in boom times.

I'm not saying that advertising is going away. But the balance is shifting. If today the successful recipe is to put 70 percent of your energy into shouting about your service and 30 percent into making it great, over the next 20 years I think that's going to invert.

Infrastructure web services had to happen.

I never worked on the school newspaper.

Many of the traits that make Amazon unusual are now deeply ingrained in the culture. In fact, if I wanted to change them, I couldn't. The cultures are self-reinforcing, and that's a good thing.

One of the things it was obvious you could do with an online store is have a much more complete selection.

Our alliance with Toysrus.com has proven to be a great win for customers, and we've looked forward to taking the next step by introducing the new Babiesrus.com teamed with Amazon.com store since we forged the alliance last August.

I went to Princeton specifically to study physics.

I feel like in one year it's very easy to go from Internet poster boy to Internet piсata.

I don't know about you, but most of my exchanges with cashiers are not that meaningful.

We're building a unique global platform...In the last 18 months we found that sellers and partners are interested in complementing their online and offline businesses with Amazon's platform

We are pioneers and the history of pioneers is not that good.

For people who are readers, reading is important to them.

You're not going to make Hemingway better by adding animations.

We are at the 1908 Hurley washing machine stage with the Internet.

Invention requires a long-term willingness to be misunderstood.

Millions of people were inspired by the Apollo Program. I was five years old when I watched Apollo 11 unfold on television, and without any doubt it was a big contributor to my passions for science, engineering, and exploration.

My own view is that every company requires a long-term view.

The book is not really the container for the book. The book itself is the narrative. It's the thing that people create.

And I still buy books at B&N, Borders and Elliot Bay ... I probably shouldn't admit this. But I don't care. I love great bookstores.

You know, we love stories and we love narrative; we love to get lost in an author's world.

I like having the digital camera on my smart phone, but I also like having a dedicated camera for when I want to take real pictures.

People who were right a lot of the time were people who often changed their minds.

But there's so much kludge, so much terrible stuff, we are at the 1908 Hurley washing machine stage with the Internet. That's where we are. We don't get our hair caught in it, but that's the level of primitiveness of where we are. We're in 1908.

I'm not prepared to make any multi-decade commitments.

I’m a big fan of all-you-can-eat plans, because they’re simpler for customers.

There are two ways to extend a business. Take inventory of what you're good at and extend out from your skills. Or determine what your customers need and work backward, even if it requires learning new skills. Kindle is an example of working backward.

There are multiple ways to be externally focused that are very successful. You can be customer-focused or competitor-focused. Some people are internally focused, and if they reach critical mass, they can tip the whole company.

Your margin is my opportunity.

Part of company culture is path-dependent. It’s the lessons you learn along the way.

Will you be clever at the expense of others, or will you be kind?

The human brain is an incredible pattern-matching machine.

I think if people read more, that is a better world.

If you're going to invest in an Internet stock, you must be a long-term investor.

Not the outcome any of us wanted.

It’s very important for entrepreneurs to be realistic. So if you believe on that first day while you’re writing the business plan that there’s a 70 percent chance that the whole thing will fail, then that kind of relieves the pressure of self-doubt.

For every leader in the company, not just for me, there are decisions that can be made by analysis. These are the best kinds of decisions!

Am I going to regret leaving Wall Street? No. Will I regret missing the beginning of the Internet? Yes.