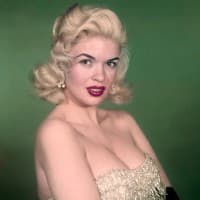 Jayne Mansfield (born Vera Jayne Palmer; April 19, 1933 – June 29, 1967) was an American actress, singer, nightclub entertainer, and Playboy Playmate. A sex symbol of the 1950s and early 1960s while under contract at 20th Century Fox, Mansfield was known for her well-publicized personal life and publicity stunts. Her film career was short-lived, but she had several box-office successes and won a Theatre World Award and a Golden Globe Award.

Mansfield enjoyed success in the role of fictional actress Rita Marlowe in the Broadway play Will Success Spoil Rock Hunter? (1955–1956), which she reprised in the film adaptation of the same name (1957). Her other film roles include the musical comedy The Girl Can't Help It (1956), the drama The Wayward Bus (1957), the neo-noir Too Hot to Handle (1960), and the sex comedy Promises! Promises! (1963); the latter established Mansfield as the first major American actress to perform in a nude scene in a post-silent era film.

Mansfield took her professional name from her first husband, public relations professional Paul Mansfield. She married three times, all of which ended in divorce, and had five children. She was allegedly intimately involved with numerous men, including Robert and John F. Kennedy, her attorney Samuel S. Brody, and Las Vegas entertainer Nelson Sardelli. On June 29, 1967, she died in an automobile accident in Eastern New Orleans at the age of 34.

All quotes by Jayne Mansfield:

Jayne Mansfield is making a career of being a girl.

Carrying a baby is the most rewarding experience a female can enjoy. A father shares in that experience, knowing that he caused it to happen.

Men are creatures with eight hands.

We take our children everywhere we go. I don't believe in having them and then leaving them to someone else to bring up

Cary Grant was one of the most marvelous men I've ever met.

We eat a lot of lean meat and fresh vegetables.

You gotta have a body.

To establish yourself as an actress, you have to become well known. A girl just starting out, I would tell her to concentrate on acting, but she doesn't have to go around wearing blankets.

My earliest memories are the best. I always try to remember the good times when Daddy was alive.

I have always considered my career self and my personal self as two different and separate people. There's a Jayne Mansfield at home, a wife and devoted mother, and there's Jayne the sex symbol, which is my career. I have always kept them completely apart and separate.

Once you were a starlet. Then you're a star. Can you be a starlet again?

My father was the only man I ever knew who really loved me unselfishly, who never used me for personal gain.

We eat a lot of lean meat and fresh vegetables.. You are what you eat, you know. When I'm 100 I'll still be doing pin-ups.

To function as an actress, I have to be in love. I have to have that incentive to work.

We live to love you more each day.

I don't particularly enjoy publicity, it seems to just follow me around.

I'd like ten more babies and ten more chihuahuas and a few Academy Awards. Meanwhile, I enjoy being a sex symbol and making people happy.

I do know that God created us equal and we're not living up to it.

A woman should be pink and cuddly for a man.

I've been identified with pink throughout my career, but I'm not as crazy about it as I've led people to believe. My favorite colors are actually neutrals — black and white — but then who thinks of a movie queen in black and white? Everything has to be in living color.

I don't know why you people [the press] like to compare me to Marilyn or that girl, what's her name, Kim Novak. Cleavage, of course, helped me a lot to get where I am. I don't know how they got there.

Women, by nature, want to be dominated.

Carrying a baby is the most rewarding experience a woman can enjoy.

I like being a pin-up girl. There's nothing wrong with it.

I guess a lot of people think that a girl who shows her bosom and wears tight dresses can't be close to God. God has always been close to me. Only He knew what was in my heart.

Every star knows you step on some toes to get where you're going - and some more after you get there. Nobody means to hurt anybody else, it just happens. You always keep saying in the back of your mind that one day you will be able to right all the wrongs. That someday almost never comes.

War is a foolish, childish, animalistic, unthinking, unintelligent way of trying to accomplish a purpose.

A lot of happiness can be brought to the mentally distraught by a little understanding.

I want to earn my own way, I like having nice things but I've never accepted anything I haven't earned.

Most girls don't know what to do with what they've got.

Men are those creatures with two legs and eight hands.

Stars were made to suffer, and I am a star.

I'll have to have a palace, of course. I may not be a princess, but I am a movie queen, and every queen should have a palace.

I don't want to get involved in the racial situation at the expense of losing fans. I wouldn't say anything too strong but I do know that God created us equal and we're not living up to it.

I've got the strangest build. It's big in the hips, small in the waist and I've got these enormous ... shoulders.

I will never be satisfied. Life is one constant search for the betterment for me.

A 41-inch bust and a lot of perseverance will get you more than a cup of coffee - a lot more.

It is the most wonderful feeling in the world, knowing you are loved and wanted

If you want the best things in life you have to earn them for yourself.

Sex appeal is a wonderful, warm, womanly healthy feeling . . . it comes only from inside, it's from nothing that's manufactured. It has nothing to do with measurements or lipstick color. To me, it's cleanliness, and youth, an effervescent desire to enjoy life.

If you're going to do something wrong, do it big, because the punishment is the same either way.