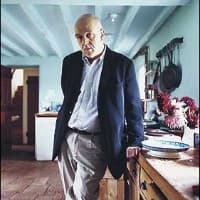 James Martin Fenton (born 25 April 1949) is an English poet, journalist and literary critic. He is a former Oxford Professor of Poetry.

ArtVanityFor poets today or in any age, the choice is not between freedom on the one hand and abstruse French forms on the other. The choice is between the nullity and vanity of our first efforts, and the developing of a sense of idiom, form, structure, metre, rhythm, line - all the fundamental characteristics of this verbal art.

BeautyMusicAn aria in an opera - Handel's 'Ombra mai fu,' for example - gets along with an incredibly small number of words and ideas and a large amount of variation and repetition. That's the beauty of it. It's not taxing to the listener's intelligence because if you haven't heard it the first time round, it'll come around again.

WarMy feeling is that poetry will wither on the vine if you don't regularly come back to the simplest fundamentals of the poem: rhythm, rhyme, simple subjects - love, death, war.

FreedomFree verse seemed democratic because it offered freedom of access to writers. And those who disdained free verse would always be open to accusations of elitism, mandarinism. Open form was like common ground on which all might graze their cattle - it was not to be closed in by usurping landlords.

When Mr Ackroyd says that in the 18th century, stranglers bit off the noses of their victims, I feel that he probably knows what he is talking about. I just wish he hadn't told me.

One does not become a guru by accident.

Nobody really knows whether they are a poet. I knew I was interested from the age of 15.

At somewhere around 10 syllables, the English poetic line is at its most relaxed and manageable.

At four lines, with the quatrain, we reach the basic stanza form familiar from a whole range of English poetic practice. This is the length of the ballad stanza, the verse of a hymn, and innumerable other kinds of verse.

Modernism in other arts brought extreme difficulty. In poetry, the characteristic difficulty imported under the name of modernism was obscurity. But obscurity could just as easily be a quality of metrical as of free verse.

Hearing that the same men who brought us 'South Park' were mounting a musical to be called 'The Book of Mormon,' we were tempted to turn away, as from an inevitable massacre.

The Mormon mission to Africa, as to other dark-skinned parts of the world, was for a long time hobbled by the racism of the movement's scripture.

When we study Shakespeare on the page, for academic purposes, we may require all kinds of help. Generally, we read him in modern spelling and with modern punctuation, and with notes. But any poetry that is performed - from song lyric to tragic speech - must make its point, as it were, without reference back.

A glance at the history of European poetry is enough to inform us that rhyme itself is not indispensable. Latin poetry in the classical age had no use for it, and the kind of Latin poetry that does rhyme - as for instance the medieval Carmina Burana - tends to be somewhat crude stuff in comparison with the classical verse that doesn't.

The voice is raised, and that is where poetry begins. And even today, in the prolonged aftermath of modernism, in places where "open form" or free verse is the orthodoxy, you will find a memory of that raising of the voice in the term "heightened speech".

I've not been a prolific poet, and it always seemed to me to be a bad idea to feel that you had to produce in order to get... credits. Production of a collection of poems every three years or every five years, or whatever, looks good, on paper. But it might not be good; it might be writing on a kind of automatic pilot.

Those who actually set out to see the fall of a city or those who choose to go to a front line, are obviously asking themselves to what extent they are cowards. But the tests they set themselves - there is a dead body, can you bear to look at it? - are nothing in comparison with the tests that are sprung on them. It is not the obvious tests that matter (do you go to pieces in a mortar attack?) but the unexpected ones (here is a man on the run, seeking your help - can you face him honestly?).

What happened to poetry in the twentieth century was that it began to be written for the page.

Considering the wealth of poetic drama that has come down to us from the Elizabethan and Jacobean periods, it is surprising that so little of any value has been added since.

Among those today who believe that modern poetry must do without rhyme or metre, there is an assumption that the alternative to free verse is a crash course in villanelles, sestinas and other such fixed forms. But most... are rare in English poetry. Few poets have written a villanelle worth reading, or indeed regret not having done so.

It normally happens that if you put two words together, or two syllables together, one of them will attract more weight, more emphasis, than the other. In other words, most so-called spondees can be read as either iambs or trochees.

The composer does not want the self-sufficiency of a richly complex text: he or she wants to feel that the text is something in need of musical setting.

Composers need words, but they do not necessarily need poetry. The Russian composer, Aleksandr Mossolov, who chose texts from newspaper small ads, had a good point to make. With revolutionary music, any text can be set to work.

A cabaret song has got to be written - for the middle voice, ideally - because you've got to hear the wit of the words. And a cabaret song gives the singer room to act, more even than an opera singer.

Some of my educated Filipino friends were aspiring poets, but their aspirations were all in the direction of the United States. They had no desire to learn from the bardic tradition that continued in the barrios. Their ideal would have been to write something that would get them to Iowa, where they would study creative writing.

Writing for the page is only one form of writing for the eye. Wherever solemn inscriptions are put up in public places, there is a sense that the site and the occasion demand a form of writing which goes beyond plain informative prose. Each word is so valued that the letters forming it are seen as objects of solemn beauty.

There is no objection to the proposal: in order to learn to be a poet, I shall try to write a sonnet. But the thing you must try to write, when you do so, is a real sonnet, and not a practice sonnet.

I prefer writing in the mornings, so to that extent I have a routine. I do reading and other things in the afternoon.

Generally speaking, rhyme is the marker for the end of a line. The first rhyme-word is like a challenge thrown down, which the poem itself has to respond to.

Great poetry does not have to be technically intricate.

A poem with grandly conceived and executed stanzas, such as one of Keats's odes, should be like an enfilade of rooms in a palace: one proceeds, with eager anticipation, from room to room.

A really interesting and happy time was when I first went to Florence as a student and studied Italian. I was living in a pensione on an allowance of £40 a month, which was princely. I did a lot of work and enjoyed myself immensely.

Babies are not brought by storks and poets are not produced by workshops.

Poetry carries its history within it, and it is oral in origin. Its transmission was oral.

"Love" is so short of perfect rhymes that convention allows half-rhymes like "move". The alternative is a plague of doves, or a kind of poem in which the poet addresses his adored both as "love" and as "guv" - a perfectly decent solution once, but only once, in a while.

One problem we face comes from the lack of any agreed sense of how we should be working to train ourselves to write poetry.

In rap, as in most popular lyrics, a very low standard is set for rhyme; but this was not always the case with popular music.

Windbags can be right. Aphorists can be wrong. It is a tough world.

Saigon was an addicted city, and we were the drug: the corruption of children, the mutilation of young men, the prostitution of women, the humiliation of the old, the division of the family, the division of the country-it had all been done in our name. . . . The French city . . . had represented the opium stage of the addiction. With the Americans had begun the heroin phase.

The writing of a poem is like a child throwing stones into a mineshaft. You compose first, then you listen for the reverberation.

The lullaby is the spell whereby the mother attempts to transform herself back from an ogre to a saint.

Imitation, if it is not forgery, is a fine thing. It stems from a generous impulse, and a realistic sense of what can and cannot be done.

Lyric poetry is, of course, musical in origin. I do know that what happened to poetry in the twentieth century was that it began to be written for the page. When it's a question of typography, why not? Poets have done beautiful things with typography - Apollinaire's 'Calligrammes,' that sort of thing.