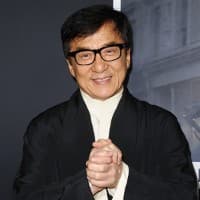 Datuk Fang Shilong (born 7 April 1954), born Chan Kong-sang and known professionally as Jackie Chan, is a Hong Kong actor, director, martial artist and stuntman known for his slapstick acrobatic fighting style, comic timing, and innovative stunts, which he typically performs himself. Chan has been acting since the 1960s, performing in more than 150 films. He is one of the most popular action film stars of all time.

Chan is one of the most recognisable and influential film personalities in the world, and he gained a widespread global following in both the Eastern and Western hemispheres. He has received fame stars on the Hong Kong Avenue of Stars and the Hollywood Walk of Fame. He has been referenced in various pop songs, cartoons, films and video games. He is an operatically trained vocalist and is also a Cantopop and Mandopop star, having released a number of music albums and sung many of the theme songs for the films in which he has starred. He is also a globally known philanthropist and has been named as one of the top 10 most charitable celebrities by Forbes magazine. In 2004, film scholar Andrew Willis stated that Chan was perhaps the "most recognised film star in the world". In 2015, Forbes estimated his net worth to be $350 million, and as of 2016, he was the second-highest-paid actor in the world.

Since 2013, Chan has been a pro-Communist politician, serving in the Chinese People's Political Consultative Conference. After the Hong Kong electoral reform in 2021, Chan became an Election Committee member and could vote for the Chief Executive.

TrainingHealthMindWhen I was young I trained a lot. I trained my mind, I trained my eyes, trained my thinking, how to help people. And it trained me how to deal with pressure.

FearMindThe ads all call me fearless, but that's just publicity. Anyone who thinks I'm not scared out of my mind whenever I do one of my stunts is crazier than I am.

I will make action movies, I think, for a few more years, another five years.

If we're not being controlled, we'll just do what we want.

If you're too free, you're like the way Hong Kong is now. It's very chaotic.

The authorities should stipulate what issues people can protest over and on what issues it is not allowed.

Acting keeps me young! I love that the fans like this kind of action and as long as they want me I'll continue to do it.

When I try to speak perfectly then I am not Jackie Chan anymore. Some words sound like I am trying too hard. The whole thing is not me.

When I go out, people look at me with a puzzled expression on their faces thinking, "You're Jackie Chan?". When people stare at me, it makes me uncomfortable. More and more I find that I just stay in my hotel when I am working.

One thing I did pick up from Cannonball Run was the use of bloopers and outtakes under the final credits, which I've done in all my movies since.

I am the Olympic Ambassador. I always promote Olympics. I just want to say, Olympics is Olympics. [You] cannot mix with politics. Olympics for me is love, peace, [being] united.

I play a nobody in Japan.

I love wushu a lot and I would love to see it included in future Olympic Games.

Do you understand the words that are coming out of my mouth?

In every movie I do have a dialogue.

In the real world, children love me.

Since the child knew his parents would give in, he tried the same trick again and again.

I'm not sure if it's good to have freedom or not. I'm really confused now.

When I make a film - I direct my own film, I write my own script - that's what I want to hear from the audience. 'Oh, thank you, Jackie!'

You cannot mix sports with politics.

I now have two different audiences. There's the one that has been watching my action films for 20 years, and the American family audience. American jokes, less fighting.

Jackie Chan is a myth.

When I'm making an American film, it's more safe because there are so many people on the set to watch me. Whatever I do, they say, 'What are you doing!? Tell me first!' There are so many restrictions.

I went by myself to Hollywood, I spoke no English, every day I had to go to school.

I've been preparing [Chinese Zodiac] for seven years, spent seven years on writing the script, spent over a year on filming it.

China produces 600 movies in a year, of which 3 or 4 go abroad, while of the several hundred they make, we only bring in 50. It's 50 now, but that could be expanded later on.

May we all co-operate and join this war on pirates.

I loved cowboy movies when I was a kid. When I was five years old, I was already wearing a cowboy hat and suit. When I grew up, I knew John Wayne, Clint Eastwood, Kirk Douglas and so on.

I want to play a fireman and a spy. I want to learn special effects.

When I was young I didn't care about education, just money and box office.

When I came to Hollywood, I spoke no English - except nobody bullied me. Every day, I had nothing to do except training in English, to keep talking.

I love animals. When I was young, I had two St. Bernards, I still have a dog, I have a lot of cats in my company. My wife always says, "You spend a lot of money on animals. More than even me!"

When I am making a film, I know what to do in front of a camera. What frightens me are the scenes with dialogue. Sometime they really want me to speak perfectly and I don't like that.

Before I do a stunt, I have to make sure it is safe.

My wish is to bring my heroes to the big screen, and many of them have already appeared in my films.

The kids never listen to you, especially the youngest ones.

I think the family movie is very important to everybody right now.

Making a Hollywood film you don't have a very big movie because they have a Safety Captain and insurance people on the set. They have to check first. 'Don't do it. Let me check. Make sure everything is safe.'

I have a metal plate in my head, and can pop my shoulder and pop it back.

Being a stunt coordinator, I have to take care not only of myself but I have to make sure everyone is safe.

Every country when they have Olympics, a lot of people come out opposed.

I just couldn't stop thinking about what landmines are doing to people here. I told people - my friends - about it, but it was just not enough. I knew I had to do more.

I think as a celebrity, we have to teach the young generation how to speak with the old generation.

I'm sure that Zhang Lanxin could be an outstanding action movie actress. For one thing, she wouldn't require a stand-in. As for Yao Xingtong, she might be an excellent action performer in her next life.

The life of an action star is very short. I want to be an actor like Robert De Niro , like Dustin Hoffman or Clint Eastwood who in their 70s or 80s can still act.

I've seen too many ups and downs in the movie industry.

I want to be in 'Avatar'. I want somebody to hire me to be Superman, a Chinese Superman or Spider-Man.

I know that eventually, I'll have to change my life and my career, but I've got a lot of good years left in me yet.

I really like to be by myself and if I do go out to look around, I dress in jeans. My secretary is constantly telling me to dress up, shave and look your best because people know you. That bothers me. I just want to be natural.

American movies show you how to fight and break armsand necks. I want to make the action in my movies like dancing.

As a father, I always want my son to be perfect. When he was young, I tried to train him in martial arts, but he said, 'I don't want to become like Bruce Lee's son, with everybody telling me how good my father was.' I just think my son is too lazy.

For me the greatest source of income is still movies. Nothing - stocks, financial speculation, real estate speculation or businesses - makes more money for me than making movies.

My affection for Taiwan... is witnessed by everyone. My wife is Taiwanese and I am a son-in-law of Taiwan. I am half Taiwanese.

I'm tired of fighting. I've always known that I can't be an action star all my life.

In the past decade, there have been a lot of friends or directors, either gossiping or telling me directly, "What you're doing now is the right thing, your main concern should be taking care of yourself, and not doing action at your age." Well, after first feeling angry, I'd think, to be honest, I really am older. So I thought, all right, but before I retire I'd like to make one last major action film, one good one.

Everyone is saying that I'm retiring, but I want to solemnly declare, that I don't want to retire, I just want to do things a bit less dangerous to my body, less dangerous action.

I just want people to remember me like I remember Buster Keaton. When they talk about Buster Keaton or Gene Kelly, people say, 'Ah yes, they good.' Maybe one day, they remember Jackie Chan that way.

Olympics for me is love, peace, united.

Money for me today does not really matter.

We live now in a global village and we are in one single family. It's our responsibility to bring friendship and love from all different places around the world and to live together in peace.

Sometimes I do need to go to karaoke, sometimes I need to relax.

I'm gradually beginning to feel that we Chinese need to be controlled. If we're not being controlled, we'll just do what we want.

My skull, my eyes, my nose three times, my jaw, my shoulder, my chest, two fingers, a knee, everything from the top of my head to the bottom of my feet. Listing what body parts he has broken

I want to really stress this, I am a director, an actor, producer, action choreographer, and I'm also an investor.

Back in the Bruce Lee era, and in my era, Kung-Fu stirred up a kind of frenzy, and many people were learning martial arts from us. But about a decade ago, Hollywood began bringing in a number of our action choreographers, including two from my own stunt crew, where they became martial arts directors. Now, a decade later, Hollywood has learned it all, so when you look at the action films they're making now, they all use our action, our martial arts, and then add to that their own technology which is ten times better than ours, and it has to leave us dumbfounded: how did they film that?