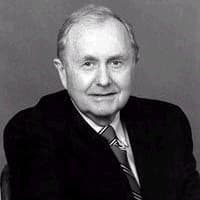 He covered presidents, from Eisenhower to Clinton, and was author of the book Hugh Sidey's Portraits of the Presidents.

All quotes by Hugh Sidey:

A sense of humor... is needed armor. Joy in one's heart and some laughter on one's lips is a sign that the person down deep has a pretty good grasp of life.

Carry laughter with you wherever you go.

The legions of reporters who cover politics don't want to quit the clash and thunder of electoral combat for the dry duty of analyzing the federal budget. As a consequence, we have created the perpetual presidential campaign.

A sense of humor is needed armor.

Bureaucrats are the only people in the world who can say absolutely nothing and mean it.

We are creating a political demolition derby, not a presidential debate. Those strange impulses in the American soul that have produced mud wrestling and The Gong Show seem to have claimed the national campaign.

In just 20 years terrorism, communications, the jet plane and the increase of wealth and knowledge have forced, to varying degrees, world leaders into a haunted and secret peerage whose links with the people they guide are meticulously cleansed and staged.

We love the blather and boast, the charge and counter-charge of campaigning. Governing is a tougher deal.

The problems seem so easy out there on the stump. Deficits shrink with a rhetorical flourish.

The prime minister found something hopeful in the man's eyes and manner. The 30 or so people who run this world analyze one another that way and then make decisions of life and death for us. Scary, but true.

They can see the brave silhouette from almost anywhere in the District of Columbia and use it as a compass to locate other monuments and eventually to find their way out of the great, gray federal wilderness.

In this era of world leadership, the metal detector is the altar and the minicam may be god.

When people travel here from across the country, they shed jealousies and politics and prejudices. The mighty climb down. The humble are elevated.

Reagan "has conducted an arms race on earth," boomed Mondale. A race generally implies two parties. The Soviets contributed a little bit to this problem, if Mondale had not noticed.

China's Premier Zhao Ziyang, for all of his billion constituents, seemed in the evening's lovely flow like a favorite uncle, smiling a little too much, wanting to be a bit American, talking about peace and pork chops.

A White House dinner is the American family assembled, from labor leaders to billionaires, actors, architects, academicians and athletes.