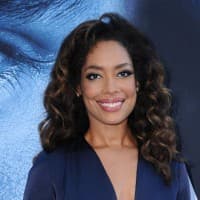 All quotes by Gina Torres:

Really feminism is about being all that you are and not having to trade one thing for another on your way up.

There aren't very many women of color in positions of power, period. Much less on television.

I certainly came up in an era where women were really making strides and making a point to beat down doors and find their place and crash through the glass ceiling.

Jessica Pearson isn't a unicorn. She's not a mythological creature. She's an example of so many women out there that are ruling their part of the world and doing an incredible job.

I would love to take off the stilettos and put the boots back on. Strap something to my hip, and let's go!

I grew up watching old musicals and seeing Ginger Rogers wearing a beautiful fitted bodice that had ostrich feathers. I love how it moved when she danced. Theatrical pieces like that stayed with me. I wanted to grow up to wear those kinds of things.

It’s the age of celebrity. It’s the age of social media. But for we old school girls who don’t want to show up at every single event just ‘cause I don’t tweet–I have nothing to say. I’m not on Facebook. I mean it sounds like I have plenty to say, but that’s to people who I’m in a room with. I’m not that interesting, and the rest is none of your business.

It’s wonderful, it’s expressive. It’s a way of using a part of my instrument that I’m comfortable and familiar with. The voice is such a vital part of crafting a character. I’m so pleased that I have the kind of voice that prints well and that people want to hear. I’ve had friends actually say, ‘You know, I was in the kitchen, and the television was on and I heard you.’ I love hearing that there’s something familiar about my sound, and that to some people it’s soothing.