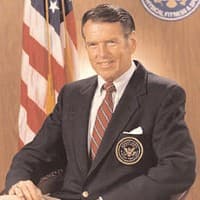 George Herbert Allen (April 29, 1918 – December 31, 1990) was an American football coach. He served as the head coach for two teams in the National Football League (NFL), the Los Angeles Rams from 1966 to 1970 and the Washington Redskins from 1971 to 1977. Allen led his teams to winning records in all 12 of his seasons as an NFL head coach, compiling an overall regular-season record of 116–47–5. Seven of his teams qualified for the NFL playoffs, including the 1972 Washington Redskins, who reached Super Bowl VII before losing to Don Shula's Miami Dolphins. Allen made a brief return as head coach of the Rams in 1978, but was fired before the regular season commenced.

Allen began his coaching career at the college football level, serving as head football coach at Morningside College in Sioux City, Iowa from 1948 to 1950 and Whittier College in Whittier, California from 1951 to 1956. He moved to the NFL in 1957 as an assistant coach for the Rams under head coach Sid Gillman. Allen then spent eight years, from 1958 to 1965, as an assistant coach and head of player personnel for the NFL's Chicago Bears before returning to the Rams as head coach in 1966.

After three years as a broadcaster for CBS Sports, from 1978 and 1981, and a short stint as an executive with the Montreal Alouettes of the Canadian Football League (CFL) in 1982, Allen resumed coaching in 1983 as head coach for the Chicago Blitz of the newly formed United States Football League (USFL). The following year, he served as head coach of the USFL's Arizona Wranglers, leading them to the league's title game, where the Wranglers lost to the Philadelphia Stars. After a second hiatus from coaching, Allen returned to the game a final time, serving as head football coach for one season, in 1990, at California State University, Long Beach. In ten seasons as a college football head coach, Allen amassed a record of 53–38–7.

Allen was inducted into the Pro Football Hall of Fame in 2002. His eldest son, George Allen is a Republican politician who served as Governor of and United States Senator from Virginia. His second son, Bruce, followed his father's footsteps as a football coach and executive, serving as general manager for the Tampa Bay Buccaneers and the Redskins of the NFL.

FootballFootball isn't necessarily won by the best players. It's won by the team with the best attitude.

FreedomWe should favor innovation and freedom over regulation.

Work hard, stay positive, and get up early. It's the best part of the day.

Quit. Most men succeed because they are determined to.

People of mediocre ability sometimes achieve outstanding success because they don't know when to quit.

Every time you lose you die a little bit. You die inside...a portion of you. Not all of your organs. Maybe just your liver.

The tougher the job, the greater the reward.

Try not to do too many things at once. Know what you want, the number one thing today and tomorrow. Persevere and get it done.

Every day you waste is one you can never make up.

Losers never know why they are losing. They will mention injuries, the officiating, the weather and bad breaks.

The definition of success is total preparation.

Today the primary threat to the liberties of the American people comes not from communism, foreign tyrants or dictators. It comes from the tendency on our own shores to centralize power, to trust bureaucracies rather than people.

If you hate your job, don't worry, you won't have it for long.

Forget the past - the future will give you plenty to worry about.

Vicodin and vodka the breakfast of champion's.

If you can accept defeat and open your pay envelope without feeling guilty, you're stealing.

Success is what you do with your ability. It's how you use your talent.

Winning is the science of being totally prepared

The street to obscurity is paved with athletes who perform great feats before friendly crowds. Greatness in major league sports is the ability to win in a stadium filled with people who are pulling for you to lose.

Losing the Super Bowl is worse than death. You have to get up the next morning.

Persevere and get it done.

Every time you win, you're reborn; when you lose, you die a little.

I am one who believes that the people's views and values are represented by those who they elect in the legislative branch and not unelected federal judges appointed for life.

It is vital that the United States maintains open lines of communication with our allies. We must assure them of our commitment to eradicating global terrorism wherever it may reside or wherever it's given haven

We are so appreciative of the men and women in uniform who are protecting us, whether in Afghanistan or Iraq or on ships around the world. For our security, they are taking the offensive to the terrorists overseas.

The man who can accept defeat and take his salary without feeling guilty is a thief.

The idea of reasoning with terrorists without force or with appeasement is naive, and I think it's dangerous

The National Liberation Front was not...a viable, autonomous organization with a life of its own; it was a facade, a "front," by means of which the DLD (the North Vietnamese Communist Party) sought to mobilize the people in the South to accomplish its ends, and to garner international sympathy and support.

I rise today to offer a formal and heartfelt apology to all the victims of lynching in our history, and for the failure of the United States Senate to take action when action was most needed.

Coaches try to beat each other from the ears up.