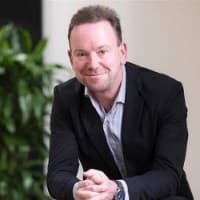 Sir Geoff Mulgan MBE (born 1961) is Professor of Collective Intelligence, Public Policy and Social Innovation at University College London (UCL). From 2011 to 2019 he was Chief Executive of the National Endowment for Science Technology and the Arts (NESTA) and Visiting Professor at University College London, the London School of Economics, and the University of Melbourne. In 2020, he joined the Nordic think tank Demos Helsinki as a Fellow.

PassionDemocracy isn't solely about polite conversations in parliaments. It needs to be continually refreshed with raw passions, anger and ideals.

FootballHappinessDeeper fulfilment is rather different from the happiness of seeing a good film or watching your team win at football, and it doesn't come at the push of a button.

Bangalore has become a centre for healthcare.

All real capitalisms are impure hybrids, mongrels mixed with other strains.

Adelaide is becoming a hub for higher education.

A tablet replacing an exercise book is not innovation, it's just a different way to make notes.

Before the Second World War, L'Oreal in France was an active supporter of the French fascists. The cosmetic group's founder Eugene Schueller was an active member of the 'Cagoule' group, committed to the violent overthrow of the Third Republic, and hosted meetings at Oreal headquarters.

A lot of people in government don't really read books at all.

Democratic nation states remain far more capable of managing the circuit of coercion, taxation and legitimation than any transnational bodies.

There is a yearning for people to return to elementary moral virtues, such as integrity and commitment. We distrust people who have no centering of values. We greatly respect businessmen, for example, if they display those virtues, even if we don't necessarily agree with the people.

Even many of the teenagers who feel confident on navigating the web simply don't have the skills needed to 'write and create' digital tools, not simply consume them.

Many of the greatest composers and musicians do their best work in extreme confinement but we are seeing it in other fields - uses of technology to link people together in networks to solve problems and almost certainly we'll get better ideas than we would from them just doing it on their own.

On the environment and climate change, I suspect that future generations will think there was too much timidity, too much fear of upsetting business. Basically, New Labour was very nervous about regulating business, or requiring it to do anything, even when there was a very clear social or environmental case for doing so.

The once-science-fiction notion of hyper-connectivity - where we are all constantly connected to social networks and other bubbling streams of digital data - has rapidly become a widespread reality.

The really interesting moment will be when you have a critical mass of people engaging through the networks, more than through the press and TV. When that happens, the culture of politics has to change, moving away from controlled one-way messages towards a political culture that is more questioning.

There are hardly any apprenticeships in care; hardly any schools preparing teenagers for jobs in care; and few signs that politicians know what to do to raise the status and rewards for what will soon be one of our most important industries.

It's an irony that growing inequality could mean more money for philanthropy. In the US, quite a few of the ultra-rich have taken to heart the 19th century industrialist and philanthropist Andrew Carnegie's comment that it's a disgrace to die wealthy.

I'm not saying [economic] growth is wrong, but throughout the years of growth, many things didn't get better. ... If you look at America, the proportion of Americans with no one to talk to about important things went up from a tenth to a quarter.

The central position of finance capital is going to come to an end, and it's going to steadily move to the sides, the margins of our society, transformed from being a master into a servant, a servant to the productive economy and of human needs.

The longer you commute the less happy you're likely to be.

Lots of creativity is and should be solitary.

Computing should be taught as a rigorous - but fun - discipline covering topics like programming, database structures, and algorithms. That doesn't have to be boring.

By international standards, many of the U.K.'s policies for civil society are exemplary. However, there are concerns about constraints on civil liberties - particularly restrictions on free assembly and about the rising tide of everyday regulation has seriously impeded community activity - from organising street parties to helping children.

Big business increasingly likes to portray itself as socially concerned, adopting the style of civic action through 'campaigns' of varying degrees of cynicism.

Health is already a dominant sector in most societies and the one most guaranteed to grow.

Huge sums are invested globally in medical research and development - and with good reason.

I can think of nothing worse than a think-tank where everybody agreed.

I didn't much like being in Parliament physically. I found it a bit depressing. It's very dark and heavy. I like being out and about.

Learning isn't something you should only do solo.

Courses can, and should, incorporate the excitement and fun of programming games, apps or even real digital devices.

Cities simply don't have the powers they need to radically innovate in cutting obesity or the number of disaffected teenagers.

Britain is rich in radicalism, and anyone who says that our society has drifted into fatalism and apathy should get out more.

As with products on supermarket shelves, the public has a right to know where their financial products and services come from.

Advisers who think that they are very clever while all around them are a bit thick, and that all the problems of the world would be solved if the thick listened to the clever, are liable to be disappointed.

Social innovation thrives on collaboration; on doing things with others, rather than just to them or for them: hence the great interest in new ways of using the web to 'crowdsource' ideas, or the many experiments involving users in designing services.

Young people who were relaxed about posting every detail of their life on Facebook become a lot less relaxed when they realise just how transparent their life has become to future employers.

All of nationalism can be understood as a kind of collective narcissism.

Societies advance through innovation every bit as much as economies do.

The idea of entrepreneurship applies as much in politics, religion, society and the arts as it does in business.

As the Internet of things advances, the very notion of a clear dividing line between reality and virtual reality becomes blurred, sometimes in creative ways.

All over the world, social innovation is tackling some of the most pressing problems facing society today - from fair trade, distance learning, hospices, urban farming and waste reduction to restorative justice and zero-carbon housing. But most of these are growing despite, not because of, help from governments.

All innovation is about letting go, saying goodbye to things to create space for the new.

The biggest barrier to dealing with climate change is us: our own attachment to habits that are hard to shift, and our great ability to park or ignore uncomfortable choices.

So is civil society prepared for the future? Probably not. Most organisations have to live hand to mouth, juggling short-term funding and perpetual minor crises. Even the bigger ones rarely get much time to stand back and look at the bigger picture. Many are on a treadmill chasing after contracts and new funding.

One of the lessons of history is that even the deepest crises can be moments of opportunity. They bring ideas from the margins into the mainstream.

Understanding capitalism is in some ways simple. At its best, capitalism rewards creators, makers and providers: the people and firms that create valuable things for others, like imaginative technologies and good food, cars and drugs.

The most dynamic cities have always been immersed in the critical innovations of their time.

Everyone knows of great projects that were too dependent on a charismatic individual, or simply too expensive to be replicated.

The smug complacency of technology adverts disguises a pretty mixed picture, with too many people not connected, too many passive users of technologies designed for interactive, and far too much talk about empowerment but far too little action to make it happen.

Governments that invest billions in new hardware still find it hard to accept that they might benefit just as much from systematic innovation in such things as child development or cutting crime.

Science is, rightly, searching for drugs to arrest ageing or to slow the advance of dementia. But the evidence suggests that many of the most powerful factors determining how you age come from what you do, and what you do with others: whether you work, whether you play music, whether you have regular visitors.

A modest dose of self-love is entirely healthy - who would want to live in a world where everyone hated themselves? But taken too far it soon becomes poisonous.

With a fractured sense of self, we come to depend on what people feed back to us - often mediated through social networks - not what we are. We have complex identities but may become less able to act as a subject - confident in what we really are.

Over 5,000 years, states have made surprisingly consistent claims about their duties. They have promised to protect people from threats; promote their welfare; deliver justice and also, perhaps less obviously, uphold truth - originally truths about the cosmos, and more recently truths drawn from reason and knowledge.

Systems governed by only one set of rules are more vulnerable than those with variety.

L'Oreal's slogan 'because you're worth it' has come to epitomise banal narcissism of early 21st century capitalism; easy indulgence and effortless self-love all available at a flick of the credit card.

Spreading an idea is hard work.

Economies are complex beasts that need people to do an extraordinary range of tasks.

In Britain, polls show large majorities in favour of mansion taxes and higher taxes on the finance sector.

The wrongful arrest of tens of thousands of British Muslims after the September 11 attacks can be explained by the very poor intelligence the police had, and, just possibly, excused by the fact that a terrorist action in Britain linked to British Muslims would have been hugely damaging.

There is incredible potential for digital technology in and beyond the classroom, but it is vital to rethink how learning is organised if we are to reap the rewards.

One effect of an individualistic culture that's poor at instilling mutual respect is that people jump more quickly to anger or violence.