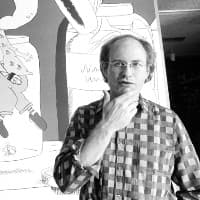 Gary Larson (born August 14, 1950) is an American cartoonist, environmentalist, and former musician. He is the creator of The Far Side, a single-panel cartoon series that was syndicated internationally to more than 1,900 newspapers for fifteen years. The series ended with Larson's retirement on January 1, 1995. In September 2019, his website alluded to a "new online era of The Far Side". On July 8, 2020, Larson released three new comics, his first in 25 years. His twenty-three books of collected cartoons have combined sales of more than forty-five million copies.

ConfidenceFearI think one thing that's important to maintain is a sense of fear, always doubting yourself... a good dose of insecurity helps your work in some ways.

Theme-park approach to nature. We judge plants and animals by whether they're entertaining to us. We gravitate toward animals and plants that are big, dramatic, beautiful and at eye-level.

Cartooning was a good fit for me. And yet now, years later, I almost never think about it.

On Career Day in high school, you don't walk around looking for the cartoon guy.

I thought some of my earlier cartoons were not exactly great shakes at the time I drew them. Now I see a certain innocence in them. The humor has a kind of purity to it, I guess. And it works better on some level for me now.

Wait a minute! This is grass! We've been eating grass!

I've always considered music stores to be the graveyards of musicians.

I think it's vital to be honest with yourself. You do have to satisfy yourself first. If you're drawing something, you have to ask yourself if it's something you genuinely think is funny. Or is it starting to fall into just a category, just kind of a shtick thing? I think it's important for all cartoonists to be honest with themselves about their own sense of humor and what they're doing.

Usually when I sat down to draw a cartoon, it would be more of a reflection of things in my past. Or it could be something I had experienced that morning, or that week, or something I might know that's part of my background.

What is that mountain goat doing way up here in the clouds?

Things can be low on the food chain, but that doesn't mean they're lowly.

The idea for any cartoon (my experience, anyway) is rarely spontaneous. Good ideas usually evolve out of pretty lame ones, and vice versa.

The message is not so much that the worms will inherit the Earth, but that all things play a role in nature, even the lowly worm.

I don't know where my ideas come from. I will admit, however, that one key ingredient is caffeine. I get a couple cups of coffee into me and weird things just start to happen.

Perspective was always important. There are some cartoonists who can stand at the foot of a building looking straight up and they'll capture it perfectly. And then there are those of us who do the same drawing and it's the goofiest-looking thing in the world. But after a while I guess you just learn what you're capable of and what you can and can't do.

It would be hard to get worse. I had only one direction to go.

I never liked my own species. On why so many of his comics are about animals, in an interview.

I actually find a lot of parallels in jazz and cartooning.

Humans have changed ecosystems more rapidly and extensively than in any comparable period of time in human history, largely to meet rapidly growing demands for food, fresh water, timber, fiber and fuel. This has resulted in a substantial and largely irreversible loss in the diversity of life on Earth.

The fuel light's on, Frank! We're all going to die! Wait, wait... Oh, my mistake - that's the intercom light.

I think I'm maintaining the quality, but internally I'm paying for it.

The problem, Mr. Fudd, is that you've been having a sublimal effect on everyone in the factory. We're proud of our product, Mr. Fudd, and there's no company in the world that build a finer skwoo dwivuh. ... Dang! Now you got me doing it!

Of course, living in an all-glass house has its disadvantages...but you should see the birds smack it.

The great thing about this jungle of ours is that anyone of you could grow up to be Lord of the apes.

He has been known by many names: Lucifer, Beelzabub, Belial, the Prince of Lies, Satan, and at a party once an obnoxious drunk kept calling him "Dude."

I never liked my own species.

Charters give public school teachers the flexibility to design programs to the individual student needs. They no longer have to go to a distant bureaucracy to ask for permission. By being allowed to make their own decisions the teachers are able to create strong partnerships with parents.

If a tree falls in the woods, and nobody is around to hear it, and it hits a mime, does anyone care?

The picture's pretty bleak, gentlemen... The world's climates are changing, the mammals are taking over, and we all have a brain about the size of a walnut.

You know those little snow globes that you shake up? I always thought my brain was sort of like that. You know, where you just give it a shake and watch what comes out and shake it again. It's like that.

A long time ago, I became aware that many of us have a tendency to lump nature into simplistic categories, such as what we consider beautiful or ugly, important or unimportant. As human a thing as that is to do, I think it often leads us to misunderstand the respective roles of life forms and their interconnectedness.

My future plans are hazy, and I've yet to experience how much cartooning is in my blood and therefore how much I'll miss it. But I have some other interests, especially in music, and I will probably take the opportunity to delve into those things more deeply.

You should always leave the party 10 minutes before you actually do.

I get a couple cups of coffee into me and weird things just start to happen.

The Bluebird of Happiness long absent from his life, Ned is visited by the Chicken of Depression.

You always hear a headline like this, 'Man Killed By Shark', you never hear it from the other perspective, 'Man Swims in Shark Infested Waters, Forgets He's Shark Food'.

It is a known fact that the sheep that give us steel wool have no natural enemies.

By the time they had diminished from 50 to 8, the other dwarves began to suspect 'Hungry'.

Every week when my batch of weekly cartoons would go to FedEx, it felt like a small miracle. Then in a few days, it's 'Here we go again.'

I don't believe in the concept of hell, but if I did I would think of it as filled with people who were cruel to animals.

People try to look for deep meanings in my work. I want to say, 'They're just cartoons, folks. You laugh or you don't.' Gee, I sound shallow. But I don't react to current events or other stimuli. I don't read or watch TV to get ideas. My work is basically sitting down at the drawing table and getting silly.