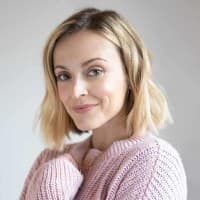 Fearne Wood (nee Cotton; born 3 September 1981) is an English television and radio presenter. She has presented television programmes such as Top of the Pops and the Red Nose Day telethons.

In 2007, she became the first regular female presenter of the Radio 1 Chart Show, which she co-hosted with Reggie Yates for two years. She went on to present her own Radio 1 show, airing every weekday morning from 2009 to 2015. She joined BBC Radio 2 in 2016.

In 2007, Cotton presented The Xtra Factor, an ITV2 spin-off from the main show. She hosted the show for one year before being replaced by Holly Willoughby for the following series. From 2008 to 2018, Cotton appeared as a team captain on the ITV2 comedy panel show Celebrity Juice alongside host Keith Lemon and fellow team captain Holly Willoughby. She quit the series in December 2018 to pursue other projects.

All quotes by Fearne Cotton:

I admire the strength and courage of all young people faced with difficult situations in life. You are an inspiration to me and so many people around you, as you overcome challenges and come out of it stronger.

Presenting Saturday mornings has been a dream for a long time. And one day in September I am going to wake up very early and it will be a reality. I can't wait.