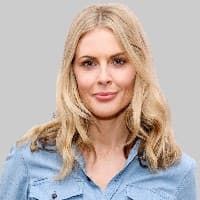 There are a lot of very beautiful people in world. I'd love to tell you who my pin-ups are now, but I might meet them.

Having this lovely person in my life. My daughter is the funniest person I know and I couldn't imagine my life without her. I think it also starts an amazing journey in a woman. You don't obsess about yourself in the way you used to, as the bulk of your time isn't spent on you.

I think it's very hard if you love someone to walk away from a relationship that isn't healthy.

Life experiences can, at times, be quite humbling, but you learn from them. But I like the changes in my life and what kind of person they've made me into. I'm very open, not as judgmental as I was in my twenties, and a lot more compassionate.

Someone said to me the other day, 'Oh, you're really jhujhi.' What does that mean? Fancy? Fabulous? Some people think I can only do fancy, I don't know why. I'm a pretty easy person really. Low maintenance. I get on with things and I'm comfortable anywhere.

The transitional period was tough, I won't kid you. You go from a certain family dynamic to adjusting to a completely new one. It took a few months for us all to fi nd our feet.

I feel like I'm back in business now, and I'm managing pretty well as a single mum. I've proved to myself I can do it. You come out the other end and think, 'Wow, I'm pretty good at this!'

I was starstruck by Madonna. She's one of the few remaining superstars. I'm so impressed by her level of discipline towards her career. We did have a little chat, and she wasn't remotely intimidating, just lovely and open.

I do sillier things sober, to be honest. I'm quite a silly person. Freya pulled my skirt up in a shop other day, I could've killed her - not literally, of course. But that was her not me.

I've never deprived myself of anything. I've always thought if you need to lose weight, carry on eating what you like, just eat less. I don't agree with doing without pasta or bread, it's too harsh.

I never say never to anything. I don't really think it would be for me, but I never put limitations on myself. Part of getting older is acceptance, though, so I'd like to think I'll age gracefully. But if other women get confi dence from having surgery, then I would never judge.

I am a true 80s girl. I loved Kylie, Madonna, The Bangles and Human League. I fancied a couple of the Neighbours kids too and I loved Bros. God, I had terrible music taste. I’m getting a taste of my own medicine now, as my daughter’s been asking for some quite scary albums.

I've been a skinny girl my whole life. I just don't sit down - I'm always on the go. It must be down to the genes. We have a healthy body image in my house and great appetites. It'd be hard for you to find a food I don't love.

I don't really believe in vices. I love wine and cheese and chocolate, but they're what make life fun. They're a pleasure and an important part of living.

So, how did you all meet?