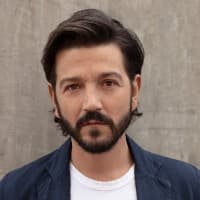 All quotes by Diego Luna:

All your acts affect all the people, people that you don't even know. So we have to live with responsibility. We have to live knowing that we're not the only ones here and you're affecting somebody else always.

Someone who surprises me, someone who makes me laugh, and someone who has her own life and wants to share that with me. I hate those relationships where someone is just following the other person around, you know?

When I was growing up in the theater there were all these amazing girls telling me about the guy who broke their heart. And I was always wishing that it was me.

When I was really young, I used to lie a lot. Now I get paid to do it.

I've got two young children, so holidays are not the same as they used to be. There are now two types: family holidays and holidays you need from that holiday.

If being a sex symbol means you have lots of sex, then I am glad to be a sex symbol. But in real life I'm not. That doesn't happen.

When I was a teenager, I went on an organised three-day tour of Rome. It was the worst experience ever. I promised myself that I would never travel like that again, with someone telling you what to see and what not to see.

I don't have this feeling like, oh, I want to live in the United States and make movies and become famous just because the money is here. I like to make movies that tell stories that I care about.

I hate fights. I try to talk people out of fighting if I can and if they start I run away.

I think film is a world of directors. Theater is a world of actors. Or, theater is for actors as cinema is for directors. I started in theater. Filming is as complete as directing film. In theater, you are there, you have a character, you have a play, you have a light, you have a set, you have an audience, and you're in control, and every night is different depending on you and the relationship with the other actors. It's as simple as that. So, you are given all the tools.

Every time I come to the States, I wish people would react to war like they react to tobacco, for example. Because war really kills in a second lots of people, thousands of people.

Many times when you're a tourist you can just stay on the surface and not really experience the place you're visiting, which will probably leave you disappointed. Everywhere has something interesting; it's just about being curious enough to find it and scratch where you have to scratch and stay longer and walk further.

In theater, you are there, you have a character, you have a play, you have a light, you have a set, you have an audience, and you're in control, and every night is different depending on you and the relationship with the other actors. It's as simple as that.

Definitely directing is the thing I like the most because this is where everything you know can be used. It's the most personal process ever. It's the most demanding one, but again, rewarding.