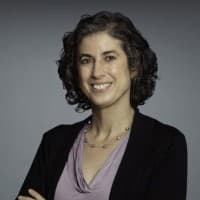 Danielle Ofri is an essayist, editor, and practicing internist in New York City. She is an attending physician at Bellevue Hospital, and Clinical Professor of Medicine at New York University School of Medicine. She contributes to the New York Times as well as Slate Magazine.

Ofri was born in New York City. She obtained an undergraduate degree in physiology from McGill University in 1986. She graduated from New York University School of Medicine with an MD as well as a PhD degree in pharmacology. Her doctorate was on the biochemistry of opioid receptors. She trained in internal medicine at NYU's Bellevue Hospital.

Being a doctor, I worry that the patient may be uncomfortable about sharing something. It could be sexual dysfunction, an eating disorder, depression, domestic violence - these are serious topics many people don't want to talk about. I'll try to follow up with questions like: How are things at home? How's work? But we don't always have time to probe. Don't be afraid to bring up the important things going on in your life, even if they don't feel 'medical.' Your doctor would rather know than not know.

It's so important that your doctor take a patience's values, not his, into consideration, along with the risks and benefits of treatment when there is a question to a doctor "What would you do?".

Doctors are taught in medical school that people ususally underreport their alcohol and drug use, so we genreal double the amount we're told. Don't be insulted if your doctor asks follow-up questions about yout drinking. We're trying to be diligent so we don't miss an alcohol or drug disorfer that could be amenable to treatment.

When a patient tells a doctor that every symptom is the most horrible ever - and the physical exam and labs are normal - we often suspect something psychological is going on. The symptoms aren't fake. They're physical manifestations of anxiety, depression, and stress. So while I'm always on the lookout for a serious underlying disease.

Sandeep Jauhar specializes in peeling back the veneer, revealing the discomfiting truths of today’s medical world. He is unafraid to dig deeply and honestly, both within himself and within the medical profession. Doctored raises critical questions that twenty-first-century medicine must answer if it is to meet the needs of its patients as well as of its practitioners.