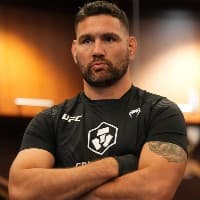 Christopher James Weidman (born June 17, 1984) is an American professional mixed martial artist. He is signed to the Ultimate Fighting Championship (UFC), where he competes in the middleweight division. He is a former UFC Middleweight Champion. As of March 7, 2022, he is #14 in the UFC middleweight rankings.

An accomplished amateur wrestler, Weidman was a two-time NJCAA All-American and a two-time NCAA Division I All-American during his collegiate career. He began his mixed martial arts career in 2008, and joined the UFC in 2011, soon amassing a 9–0 record. In 2013, Weidman came to worldwide prominence by defeating Anderson Silva to win the UFC Middleweight Championship. This ended Silva's 16-fight winning streak inside the UFC and his seven-year reign as the champion. Weidman retained the title for two and a half years, defending it three times before losing it to Luke Rockhold.

All quotes by Chris Weidman:

One of the big things that I focus on is not having regrets, just taking every opportunity I have and going for it.

I think any time you get beaten down and rise back up again, you become stronger.

There's no ceiling... just a continuation of improvement.

Its about continuing to learn and being open-minded, don't ever think you know it all.

The sky is the limit when you work hard.

The truth comes out... I think when you fight you find out who you are

When I get in there, everything gets blocked out. I just focus on the person in the cage with me. That's all my brain has room for at the time.

I want to be undefeated for a while and end my career as one of the greatest of all-time.

Don't think OF your goals, think FROM them.

I tried to take every little thing and use it as an advantage. People were asking me how it felt to be in the UFC, and I wasn’t thinking about that. All that mattered was Alessio Sakara. I had to win that fight. Even now I still haven’t got time to sit back. Again, this is a must win, must dominate, fight for me in my eyes, and I won’t be happy unless that’s the way it goes.

I only train, I don't know what a break is.

The only reason I got into MMA was to be the best.

I try to keep a positive attitude about everything.

I am always in the gym sparring. I look at every fight kind of like a sparring match.

I won't be happy unless I finish Lyoto Machida.