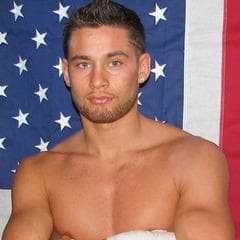 Christopher Mark Algieri (born March 2, 1984) is an American professional boxer and former kickboxer. In boxing he held the WBO junior welterweight title in 2014 and challenged for the WBO welterweight title later that year; in kickboxing he was an undefeated ISKA World welterweight and WKA World super welterweight champion. Outside of boxing, Algieri works as a nutritionist.

All quotes by Chris Algieri:

Sure many people will be shocked when I win, but not me.

The hard work is done. The training is done. I'm not gonna say too much.

We need to get more people watching boxing. I love this sport and anything we can do to help it is great.

I knew my time would come I just had to stay focused and disciplined and if you work hard good things happen. I am right where I am supposed to be.

I am no busier than I have ever been - I have always been a busy guy.

Medical School is the next step in my career. There is no doubt about that. My mind is still hungry and I want to continue my education.

[Mate] really is an overall incredible health drink and on top of it it's part of the culture. It's something my whole family and does and what we have always done. It's warm and soothing for the belly and it helps you digest as well. I drink it all the way up until fight day. It's a part of my routine.

It's great to see part of my culture doing so well in the sport that I'm involved in, a sport that I have a passion for. I grew up hearing about a lot of Argentine fighters, the great Carlos Monzon and even the fighters on ESPN lime Omar Vaez; and now guys like Marcos Maidana and Sergio Martinez.

The judges are much closer to the action than the fans are. Fans sure can sway the way a fight looks. I am confident in the ability of the judges and if I do what I need to do and things go the way that we plan, we will come out with the victory regardless of the fan support.

I drink mate every day during training camp, and just in general. It's packed full of vitamins and nutrients and a lot of B vitamins that you would normally get from meat. The caffeine in there affects me less and it's more like a stimulant. I can drink more of it and it's hydrating as well. It's one of my favorite drinks, especially on a cold morning.

I feel like I fight an aggressive style - smart / aggressive.

More often you see Argentine fighters doing big things on a major stage. To be associated with those guys is really an honor and it's great to see so many people from my culture do big things in the sport.

I would have been more aggressive in the Ruslan [Provodnikov] fight if not because of my eye early in the fight. I had to protect that eye and be even smarter than I normally would. Don't be confused with my style just from that one fight, because I know a lot of you have only seen that one fight.

I am an aggressive style boxer and I will be in there to mix it up, but it's going to be in a smart way.

If I can think of anything, but nothing specific that I have learned, is the time management and discipline and stay focused. Mentally focused to be aware. Our training sessions are mentally packed. We work on very specific game plans and strategies.

I have been dealing with those types of complicated things and my scholastic background, so I think that helps me - my nutrition and my understanding of the human body, and the processes for recovery and proper dietary restrictions.

I box but I have never heard anyone say that I was a boring fighter or that they didn't really like watching my style.

All of my fights have been exciting, even the lopsided ones. I am not concerned about taking a conscious approach to making my style more exciting. I think I go out there and fight in the manner that works best for me getting a win and it just so happens that it's good to watch.

I throw a lot more punches than Floyd [ Mayweather]. He's very efficient with his punches and when he throws he lands a very high percentage but he's not exceptionally busy every round.

Bernard Hopkins' style is the way...everything he does is for a reason - little head feints, little hand movements, little shoulder rolls and gestures are all finer points of the sweet science. Before contemporary times everyone did that kind of stuff.

For one, [ Freddie Roach] is wasting his time because I don't even read those reports. So that's the first thing. Secondly, I hear about them from other people around me and it doesn't make a difference to me. It seems kind of odd for him to be coming out so much and saying so many different things and every day it's a new thing. But like I said, I don't read them and I don't care about them and it doesn't make a difference come fight night.

I am just focused on what's in front of me. I really can't worry about or complain about the WBO situation at this point.

I am a guy that does a million other things in addition to boxing. I have a lot of other stuff that I have been into my entire career and I have put all of that on hold now I am doing more stuff involving the actual promotion of the fight like doing interviews and making appearances.

My open workouts are like fight day. I've got a lot of pressure on me and I ride it to the top.

The more attention that is drawn to any of the fighters, especially in a positive way, is good for the sport.

Boxing on Long Island - there is history there. It's been a while since Buddy McGirt and Gerry Cooney, but you know, we are in kind of a resurgence now. We are putting our show there constantly - Star Boxing shows at the Paramount have drawn big crowds over the years and there is a lot of up and coming talent there now. You see more and more gyms with competitive professional fighters.

When I was a kid, I did martial arts because boxing wasn't really available on Long Island. I think now kids are able to begin boxing earlier. So it's great and whatever can promote the sport on a whole is a good thing. And if we can do it on Long Island, where I am from, it's a beautiful thing.

Let me touch on [Ruslan] Provodnikov's style. He is a lot better than people think. Every fight he has lost has been a very close fight. He really brought it and he is a great champion. On top of being an exciting fighter the guy is good.

[Ruslan] Provodnikov has a totally different style than Manny Pacquiao and that's what training camp is all about and that's why I stay in shape year round, so I can work on strategy in camp instead of getting in shape.

I have had to fight every single style coming up on my way to get here I wasn't fed anyone in any point of my career. I fought every style you could think of - righty, lefty, tall, short, power-puncher, fast guys, counter guys, so for me it is the norm - training for guys with different styles.

I have not been one of those champions that have been fed perfect guys to make me look great.

I have the talent and the tools to win.

I'm tall for the weight class. I am built to go in and stand in front of the man and trade bombs - why would I do that? I've got length, I've got reach, I've got speed; I've got footwork and defense, but that's not what's going to be the difference in this fight. It's not a tall guy versus a short guy - It's Chris Algieri versus Manny Pacquiao. It's what I bring to the table versus what he brings to the table. I think a lot of it has to do with my mental preparation and mind going into this fight as well as what we know from Manny.

I think I bring a lot of energy and combinations and punches every single round. Even when I'm not throwing I am moving my upper body, I'm moving my feet, I'm moving my head, I am changing levels - all those things are important and they count and they are a part of boxing.

Stony Brook is a great school scholastically and I enjoyed my time there. It taught me a lot about life and about the future that I am living now. It is an honor to have graduated from there and to be recognized as an alumnus.

I had some very fit people. I worked with a lot of athletes helping them, especially combat athletes, MMA fighters,[Dennis] Bermudez, [Chris] Weidman, and guys on the lower levels - boxers and MMA fighters.

I was a full time student either at Stony Brook or NYU getting my masters degree. After I graduated with my masters I was working as a nutritionist and a personal trainer. So I have always had other business or other things going on while training for a fight.

It was great to be around [Tony Walters] - he was like a father figure to me especially in my athletic background. That is a person I will never forget and share in all of my victories since I left there until I am done.

Tony [Walters] was one of the first international world-class athlete I had ever dealt with and I was lucky enough to have him as a coach and he taught me a lot about the mental aspects of training and competition.

I have seen videos of Sugar Ray Robinson and Willie Pep who did a million other things than just punch, to set up a perfect shot or to offset their opponents' rhythm. Boxing is incredibly complicated. It's not Rock'em Sock'em Robots.