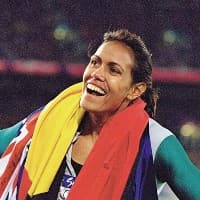 Australian former sprinter, who specialized in the 400 metres event

Catherine Astrid Salome Freeman OAM (born 16 February 1973) is an Australian former sprinter, who specialized in the 400 metres event. Her personal best of 48.63 seconds currently ranks her as the ninth-fastest woman of all time, set while finishing second to Marie-José Pérec's number-four time at the 1996 Olympics. She became the Olympic champion for the women's 400 metres at the 2000 Summer Olympics, at which she lit the Olympic Flame.

Freeman was the first Australian Indigenous person to become a Commonwealth Games gold medalist at age 16 in 1990. The year 1994 was her breakthrough season. At the 1994 Commonwealth Games in Canada, Freeman won gold in both the 200 m and 400 m. She also won the silver medal at the 1996 Olympics and came first at the 1997 World Championships in the 400 m event. In 1998, Freeman took a break from running due to injury. She returned from injury in form with a first place in the 400 m at the 1999 World Championships. She announced her retirement from athletics in 2003.

In 2007, she founded the Cathy Freeman Foundation.

When I was 18 years old, about to develop my sportsman career, the asthma complaints became already some years before.

For athletes traditionally it's such a fantastic stepping stone to greater things down the track and in the future. Don't undermine the Commonwealth Games!

This occasion is personally very meaningful and I hope to visit Korea again if I have the chance.

The thing I do best is laugh.

I lie around the floor with my cats Billy and Jazz or watch DVDs with my best friends.

I like being in the workforce; it keeps me grounded.

I'd like to see as many sports as I can because I have never had the chance to enjoy the other sports in the past.

I feel like I've reached an age where I can relax a little bit with the knowledge of what I've been through, take all that experience and use it. I love the challenge of trying to get back to where I've been, and beyond it.

I don't like people looking at me; I hate the attention.

People could see in me who I am now, an Olympic champ, the best in the world.

I decided that I was going to go to the Olympics to see if I had made the right decision to retire because I knew that if I'd made the mistake of retiring I would know during and after those Games in Athens.

I took only twice a time-out, once, when I was hurt, and a second time, when I much felt I was exhausted out of personal reasons.

It is my second visit to Korea since the International Junior Athletic Championships in 1992. Both then and now, I felt Korea is an interesting country and the people are very kind.

I don't have a lot of regrets in my life.

I made publicity contracts with Nike, several broadcasting companies and airline companies within Australia.

I want to keep my private life private.

My last real race was at the Olympics in Sydney in 2000.

I'm not a marriage expert, quite clearly.

Being overseas at the time it all kind of happened was perfect because I had no idea that it was going to attract so much media attention and provoke these lovely people calling in and offering up their opinions and advice.

The last sort of really low-key race I ran, I realized with about a hundred metres to go, that my heart just wasn't in it. I wasn't trying my hardest, I didn't care to compete against the girls I was up against. That spoke a lot about where my heart was taking me-which was off the track.

Asthma is treatable and well can be controlled.

I have time to breathe, time to be myself more often, I am a lot more relaxed and less guarded.

I do not have any official responsibilities related to the Australian Olympic Committee or the Federation of Athletic Associations since I am too busy with my private business.

I was running since I was 10. Since grade one at school people looked at me and thought, oh gosh she can really run, she's a natural.

The Athens Olympics will be meaningful even though I cannot participate as an athlete, since I can participate in the flame relay all over the world.

Australians are a fantastic bunch of people but the attention can be overwhelming for someone like me.

I don't agree with everything Madonna's done but she is fearless.

I have a friend who, if she has a bad hair day, it affects her whole mood because it is part of her sexuality, her confidence. I don't have that problem any more.

I'm certainly not ready to go changing the world overnight right now. I'm completely uninformed about a lot of our issues, a lot of the nation's issues, not just Indigenous issues.

My mind is pretty made up that life for Cathy Freeman will be as an unmarried woman from now on.

I quite clearly have made the right decision in my heart, retirement was the way.

I'm learning in my own sort of quiet, out-of-the-spotlight kind of way. I certainly have my general point of view about the government, and the future of our children. I'm certainly learning all the time, I'm happy to be an onlooker for now.

I'm so lucky. I have such a great support system. All I have to do is run.

I'll just let time happen. I don't have to articulate what may be or what may not be. I don't even do that to myself.

I've had my fair share of being dismissed. But I'm only about to turn 30. And when I finish running, I'm going to be a dangerous woman.

I definitely do things on my terms, it may not seem that way but I actually do.

I'm doing something now where I'm going to have to learn so much and that takes time nurturing, those kinds of relationships.

With Alexander's cancer, I was definitely brought to my knees for the first time because of the fear factor.

Money makes life easier but I don't want to be rich, not at all.

My feelings tried to control me on my run. I had to concentrate fully on forthcoming running and success. I wanted to triumph.

I felt so full of gratitude and humility that I clasped my hands in front of me, closed my eyes and said a silent prayer of thanks to God... I had at last achieved something I'd wanted for so long... My insides bubbled with happiness. It was a dream come true.

I was always surrounded by expectation from the very first race I ran as a 5-year-old.

I think the greatest amount of pressure is the pressure I place on myself. So in a way I chose to be alone.

My story has resonated around the world. I am just Catherine, I just like to run. And I'll run with opportunities.

I am very determined and the sport is my passion. I believe I am born for running.

Realise there is always somebody else in the World who's not coping as well as you are.

Disappointment and adversity can be catalysts for greatness. There's something particularly exciting about being the hunter, as opposed to the hunted. And that can make for powerful energy.

Twenty seconds before a race, there's absolute focus. The key thing is to achieve relaxation, but at the same to have absolute total control. You've got to find the balance between being totally ready to go and being really at peace with yourself as well.

I want to be a positive role model, especially for kids and Aboriginal people... When people see me, often all they see is another Australian athlete having a go. It isn't until they see the full Cathy Freeman picture that they realise how proud I am of my ancestry and heritage. I'd like a little more tolerance and acceptance of my culture and all the differing cultures that make up Australia.

I have been told many times that when I win I make my people proud to be Australian. I am Aboriginal, I am one of them and every time I win or am honoured like this it should be an example to Aboriginal people who may think they have nowhere to go but down. But more importantly I am an Australian and I would like to make all Australians feel proud to be Australian. Ours is a truly multicultural society and should be united as such. I would like to believe that my successes are celebrated by all Australians, bringing our nation together.

You got to try and reach for the stars or try and achieve the unreachable.