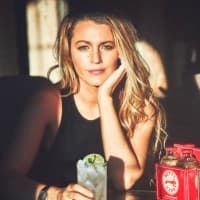 Blake Ellender Lively (born August 25, 1987) is an American actress, model, director, and advocate. Born in Los Angeles, Lively is the daughter of actor Ernie Lively, and made her professional debut in his directorial project Sandman (1998). She starred as Bridget Vreeland in The Sisterhood of the Traveling Pants (2005) alongside its sequel The Sisterhood of the Traveling Pants 2 (2008) to commercial success. She appeared opposite Justin Long in the comedy Accepted (2006), and gained recognition for portraying Serena van der Woodsen in the CW drama television series Gossip Girl (2007–2012).

She starred in romantic-comedies New York, I Love You (2008) and The Private Lives of Pippa Lee (2009). Lively starred opposite Ben Affleck in crime thriller The Town (2010) and appeared with Ryan Reynolds in Green Lantern (2011). She was in the ensemble cast of Savages (2012) and garnered acclaim for portraying the titular character in romantic fantasy The Age of Adaline (2015). She appeared in survivor horror film The Shallows (2016) and psychological drama All I See Is You (2016). She starred opposite Anna Kendrick in the box-office hit A Simple Favor (2018), and in The Rhythm Section (2020), where she received critical praise.

Lively is married to actor Ryan Reynolds, with whom she has three daughters.

BeautyClothesStyleWhat can I say? I feel good when I'm wearing heels. I feel sexier, attractive.

FashionClothesAll I need is my Chanel dress, my Louboutins, and some red lipstick.

MotivationLifeYou can't really go wrong as long as you're true to yourself.

Self-DisciplineLifeIf you ever want something badly, let it go. If it comes back to you, then it's yours forever. If it doesn't, then it was never yours to begin with.

Los AngelesActing workActors about themselvesI think for a lot of people, acting becomes a lifestyle, especially when you're living in Los Angeles.

ArtI admire people who find that what fulfills them is their art or their work, but what fulfills both me and my husband is our family. Knowing that, everything else comes second. We've each given up stuff we loved in order to not work at the same time.

PerfumeOne of the very few things that I do every single day is put on fragrance. If I'm not wearing makeup ... I still put my fragrance on. I will brush my teeth and put on my perfume.

ConfidenceBeautyThe most beautiful thing you can wear is confidence.

The most powerful thing is for women not just to be the beneficiaries of the change, but to be agents of it.

All I can do is share what I'm thinking - and learn from others.

Dressing up is all about reflecting how I feel.

We're all born feeling perfect until somebody tells us we're not. So there's nothing I can teach my daughter. She already has all of it. The only thing I can do is protect what she already feels.

If i'm not with somebody who really excites or inspires me, then I'd rather be by myself.

The idea that a child doesn't have the opportunity to be a child is devastating.

When I have bad days, I just eat lots of chocolate ice cream and dance to the Lion King soundtrack. It's really odd, but it's true.

I look at anything in life like as long as you do what you believe in, then it's going to work out. Because even if other people don't like what you're doing, you're happy because you did what you believed in.

People gossip. People are insecure, so they talk about other people so that they won't be talked about. They point out flaws in other people to make them feel good about themselves.

I think certain people are the way they are for certain reasons that we can't necessarily judge without knowing.

I have a strong sense of myself. That gives me a sense of security. If I define myself by things that are always changing, like the public's opinion or what I'm wearing or what job I'm doing, there's no stability in that.

I feel like there are so many people I admire for so many reasons that I can't look at one person's life and say, "I want that life." I want to make my own history.

Cheesecake Factory is great. It should have Michelin stars.

I think it's very attractive when people cook. So I don't wear sweatpants. When you dress sexy to cook, too, it's like, damn, I got a girl who can cook and look like that? And I always have really cute aprons.

I think in high school there's so many cliques. You're never safe.

With acting, I think half of it is just acting confident. We stand on these red carpets and pose in these dresses, but we're all only so confident. It doesn't mean we think we're great looking or anything. It's all a façade.

Everyone likes to tell stories. And gossip is, of course, even more exciting, if you know the people. But if the gossip's about yourself, it's very weird. They once wrote about me that I had been clubbing with some guys. At the moment I'm a victim and that hurts because it's not me who does something like that. Such stories are just unfair.

I didn't have a boyfriend until I was 17. There were boys at school that I would find out later had a crush on me but I was too shy to talk to them.

I had a lot of friends in high school, but I was never the wild party girl. Never have been, never plan to be!

People ask me why I don't tweet. Honestly, I'm so sick of myself.

I went from having the healthy hair that you have as a kid, to completely destroying it and frying it, and then actually having really healthy thick hair that I was proud of again. I just put an emphasis on what shampoo and conditioner I use.

I never really thought about acting as a child. It wasn't like, "This is the career that I want to pursue." So when I first started acting, I was more concerned with just being on a set and all of the woes of that, and I didn't really know it or understand it as a craft yet.

My mom modeled and made clothes, so I always had such an appreciation for design. And then Gossip Girl completely blew open the door to fashion for me.

I love being at home and cooking and baking.

Because I have some amazing shoes and bags and stories that need to be appreciated.

I never think about how other people will respond to the way I dress.

Election made me more aware, more conscious, more sensitive. Not just of sexism but of discrimination in all areas - class, gender, race. I had realized that there were problems .

I did not want to be an actor because my whole family did it-going into the family business was the last thing I wanted to do.

There are looks that I see on other people that I think would look horrible on me, but I think if somebody has the courage to be really daring and try something outlandish, then more power to them. Thats just encouraging and inspiring.

I love scuba diving. I'm an avid diver. And, there's this beautiful world that's more incredible than any CGI film we could ever make, that we're destroying, for what? It's heartbreaking to me.

I eat cupcakes and I don't work out! But if you ask me in 10 years, I'm going to regret answering that way now. I don't even drink water, I'm terrible! I'm 24 now, so I guess I've been very, very lucky that it doesn't show that I like to eat. I should probably start working out I guess.

When I saw my first movie, I was fine, but I thought, "Oh, my heavens. It's not about just standing there on my mark and saying these lines. I need to actually act."

Harrison Ford is a great actor and he's and lovely man and a great father and all of these things, I got to just meet him as a person and someone I respect as an actor.I'd never seen any 'Indiana Jones' movies or 'Star Wars' movies. My husband made me watch the Indiana Jones trilogy, I just was like fanboy Comic-Con geeked out. It was amazing I didn't show up to set with a whip and a hat.

I think if you're going to get a tattoo, it should be significant, especially when it's all the way up your arms and your body.

You could spend your life trying to uncover all the treasures in New Orleans and not even scratch the surface. It's such an amazing place.

I didn't have an agent. I would just write down that I was with my brother's agency, and then the agency would get calls and say that they had no idea who I was.

When I say something funny, I don’t laugh, so my friends are always like, ‘Hahahahaaaa!’ so people know. When I’m not with them, I always think, This person doesn’t know I’m funny; they just think I’m a jerk.

I've never worked with an acting coach, but my parents had acting classes and I grew up around them my whole life just because I didn't have a babysitter.

When I was a kid people always asked why I didn't act like the rest of my family, and parents would say, "Well, she needs a childhood! We would never allow her to do that even if she wanted to". They were as involved in my life as any parents are in any person's life.

And then Gossip Girl completely blew open the door to fashion for me. I'd go to fashion shows and call my publicist and say, 'Can I wear that?' I think I became my own stylist by not knowing any better. And once I was told it was time to get one, I thought: This is one of my favorite hobbies! And I'm going to pay someone to steal my hobby from me? That's a terrible idea!

My daughter is just as obsessed with playing in my makeup as everyone's daughter is. She paints our walls and herself and clothes and me. So I have to do makeup in 30 seconds or my whole house is covered in my makeup, because she'll just take it and run.

I actually think that craft service was the reason I got into acting: the free food. I literally remember on my first job being like, "Yes! I get to have craft service every day!"

I feel like all I've done lately is play really sexually-charged drug addicts. I don't know what's wrong with me. I've gotta go to Disneyland more and get more excitement.