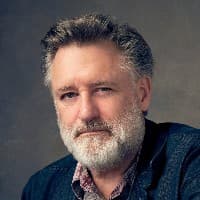 Pullman has also had a long stage acting career. He has appeared on Broadway several times, including in Edward Albee's The Goat, or Who Is Sylvia? in 2002

All quotes by Bill Pullman:

There's a point you get to on the stage where you're not remembering lines but living them, and you reach this pure moment which, really, is more intense than what you can achieve in life.

Theater has always been most important to my psyche.

Rural towns aren't always idyllic. It's easy to feel trapped and be aware of social hypocrisy.

I co-own the ranch with my brother, and he and his wife are really the backbone of the operation.

I like those crisis moments - if you're on top of it and don't get pulled under by panic and fear, it's a very bonding thing.

I do take lots of time off between projects, but when the right thing comes along, I don't like to turn it down, I've been doing this for a decade, and I remember what it was like when I started. You spend maybe five percent of your time actually doing it, and the rest of the time, you're trying to get that five percent.

The writers are pretty political and they want to get as big an audience as they can - they want the popular vote.

Well, I can do certain jobs because smells don't bother me. But that means I'm usually the one at the ranch cleaning up all the manure.

There's definitely a pattern of great British shows that get reinvented in America and do really well here, but I think 'Torchwood' is a bit different. It's more of a hybrid that doesn't exist as a reinvention.

With While You Were Sleeping, it was so much fun and such a Cinderella story, that I didn't want to do another romantic comedy. I wanted to do the opposite.

I was brought up in a very small town in upstate New York.

Truthfully, I almost avoided 'While You Were Sleeping,' because I find those romantic comedies kind of precious, and they're full of lines that leave you feeling a little bewildered when you say them.

I also turn down what's probably a good amount of coinage to be made out of playing dads, an incredible number of obnoxious dad.

I was 21, and rehearsing a play, took a fall and was in a coma for a few days. And when I recovered, I'd lost my sense of smell completely.