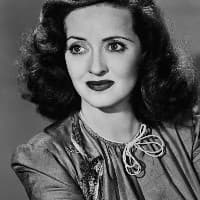 Her career went through several periods of eclipse, but despite a long period of ill health she continued acting in film and on television until shortly before her death from breast cancer in 1989. She admitted that her success had often been at the expense of her personal relationships. She was married four times, divorcing three and widowed once. She raised her children largely as a single parent.

All quotes by Bette Davis:

I think it's just too much trouble to be dishonest and keep up with yourself.

I believe one should be a woman at home.

I don't think in business it matters whether you're a man or a woman if you can do your job and have a brain.

I have often seen an actor laugh off the stage, but I don't remember ever having seen one weep.

Wave after wave of love flooded the stage and washed over me, the beginning of the one great durable romance of my life.

They say that in Hollywood one can't be honest, but I think honesty counts in Hollywood just as much as it does anywhere else. I think it's just too much trouble to be dishonest and keep up with yourself.

I have always felt proud of my Oscars and my numerous nominations. This pride is due to the fact it was the result of voters from the members of my own profession. This, of course, is a great compliment for one's work. I hope each winner of an Oscar is as thrilled as I was when I received mine.

I went back to work because someone had to pay for the groceries.

Locations are all tough, all miserable. I never left the sound stage for 18 years at Warners. We never went outside the studio, not even for big scenes.

She did it the hard way.

Hollywood always wanted me to be pretty, but I fought for realism.

Actually, I think business women are better women at home, if you want to know the truth because you do understand what goes into a day's work out in the world, a very nerve-racking affair.

I don't take the movies seriously, and anyone who does is in for a headache.

Psychoanalysis. Almost went three times - almost. Then I decided what was peculiar about me was probably what made me successful. I've seen some very talented actors go into analysis and really lose it.

Brought up to respect the conventions, love had to end in marriage. I'm afraid it did.

I don't think of myself as a character actress - that's become a phrase which means you've had it.

May each of my grandsons know, at an early age, what his life's ambition is -- and may he be successful in his pursuit of that goal.

The male ego with few exceptions is elephantine to start with.

It is my last wish to be burried sitting up.

Today everyone is a star - they're all billed as 'starring' or 'also starring'. In my day, we earned that recognition.

I sent my flowers across the hall to Mrs Nixon but her husband remembered what a Democrat I am and sent them back.

From the moment I was six I felt sexy. And let me tell you it was hell, sheer hell, waiting to do something about it.

In this rat-race everybody's guilty till proved innocent!

Joan Crawford is a movie star. I am an actress.

The only reason anyone goes to Broadway is because they can't get work in the movies.

I was never very interested in boys - and there were plenty of them - vying with one another to see how many famous women they would get into the hay.

I think men have got to change an awful lot. They still prefer the little woman.

Women are the essential part of the theater but the writers are not writing about women. I think they're too perplexed about the whole female situation probably.

I work to stay alive.

I will not retire while I've still got my legs and my make-up box.

I've lost my faith in science.

Pray to God and say the lines.

Gay Liberation? I ain't against it, it's just that there's nothing in it for me.

I think I'll have a large order of prognosis negative.

Dramatic art in her opinion is knowing how to fill a sweater.

To look back is to relax one's vigil.

I never did pal around with actresses. Their talk usually bored me to tears.

I firmly believe, however, that if your children have never hated you, you have failed as a parent.

I am doomed to an eternity of compulsive work. No set goal achieved satisfies. Success only breeds a new goal. The golden apple devoured has seeds. It is endless.

With the newspaper strike on, I wouldn't consider dying.

I was so uncomfortable at a party recently when the conversation droned on about women who are constantly getting married. I was on the edge of my chair, close to squirming in embarrassment because I myself was guilty of four husbands. I finally leaned forward and squeaked, 'But one died!

I wanted to be the first to win three Oscars, but Miss Hepburn has done it. Actually it hasn't been done. Miss Hepburn only won half an Oscar. If they'd given me half an Oscar I would have thrown it back in their faces. You see, I'm an Aries. I never lose.

Playing our parts. Yes, we all have to do that and from childhood on, I have found that my own character has been much harder to play worthily and far harder at times to comprehend than any of the roles I have portrayed.

What a fool I was to come to Hollywood where they only understand platinum blondes and where legs are more important than talent.

An affair now and then is good for a marriage. It adds spice, stops it from getting boring... I ought to know.

I was thought to be "stuck up." I wasn't. i was just sure of myself.

I have been at war from the beginning. I've never looked back before. I've never had the time and it has always seemed so dangerous. To look back is to relax one's vigil.

If men found out how to give birth to children they'll never propose again.

We movie stars all end up by ourselves. Who knows? Maybe we want to.

Without wonder and insight, acting is just a trade. With it, it becomes creation.

If Hollywood didn't work out, I was prepared to be the best secretary in the world.

The real actor - like any real artistj- has a direct line to the collective heart.

Evil people you never forget them. And that's the aim of any actress-never to be forgotten.

One can be respected with the truth in Hollywood just as much as anywhere else you know or else I wouldn't have had a career.

I may not have been wearing a mink coat, but I was traveling with a dog. That should have made you think I was an actress!

I was the female Marlon Brando of my generation.

It's a very independent male creature that lives alone, and a lot of independent females who live alone. It's all very sad but it's much easier for both sexes to do it this way nowadays.

At 50, I thought proudly: Here we are, half century! Being 60 was fairly frightening. You want to know how I spent my 70th birthday? I put on a completely black face, a fuzzy black Afro wig, wore black clothes and hung a black wreath on my door.

The out-of-work actor wears out more than shoe leather. The very sensibilities that make him an artist are shattered by the disregard he is shown as a human being.

I will never be below the title.

There are new words now that excuse everybody. Give me the good old days of heroes and villains, the people you can bravo or hiss. There was a truth to them that all the slick credulity of today cannot touch.