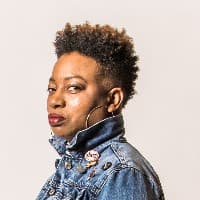 Bahamadia has been a featured artist on tracks by musicians including The Roots, Jedi Mind Tricks, Erykah Badu, Morcheeba, Guru, and Towa Tei, among others.

In November 2016, Bahamadia appeared as a guest client on season 15 of Project Runway, in which her son, Mah-Jing Wong, was a contestant.

My aura is psychedelic, flow non-prehistoric metamorphic boric like acid no hat tricks a classic so park that ass like Jurassic